A mosaic of Shuri Castle's main building, which was destroyed by fire in Okinawa last year, is on display in front of a shop selling products from the prefecture in an underground mall in Sapporo on the northernmost main island of Hokkaido.

About 40 students from Hokkaido Asahikawa Technical High School created the mosaic 187 centimeters wide and 93 cm long. The fine squares were painted with felt-tip pens in designated colors, such as red and black. 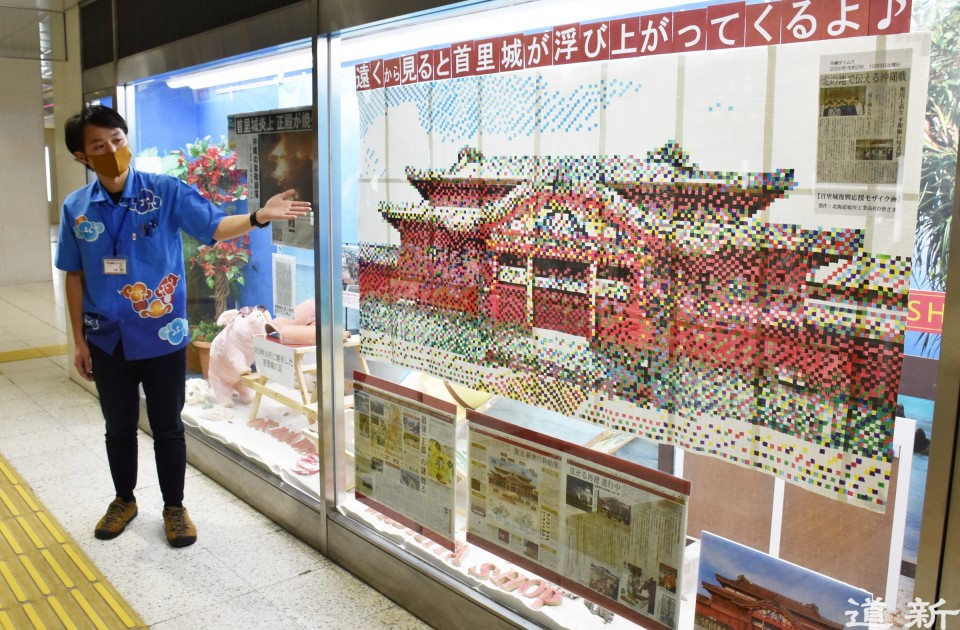 As the high school is committed to peace studies, the mosaic was displayed at its entrance in October in conjunction with an exhibition of photos of the Battle of Okinawa during World War II.

The shop is headquartered in Naha, the capital of Okinawa. The 34-year-old manager of the store learned about the activities of the high school through an article in a local Okinawan newspaper and approached the school about exhibiting the mosaic in Sapporo.

After the school agreed, the mosaic was put on display in front of the store on Nov. 9 and will remain there until the end of the year.

"I'm happy that our efforts have become known to many people. I want people to take an interest in Okinawa," said a 17-year-old student in the Department of Electronic Mechanics at the school, who was involved in making the mosaic.

The store collected 4.89 million yen from November last year to March this year for the reconstruction of Shuri Castle, the second-highest amount among 11 shop branches in Japan, with the Ginza branch in Tokyo raising the most money.

The manager said, "There are many people in faraway Hokkaido who support the reconstruction of Shuri Castle. The mosaic gave us a warm feeling," he said.