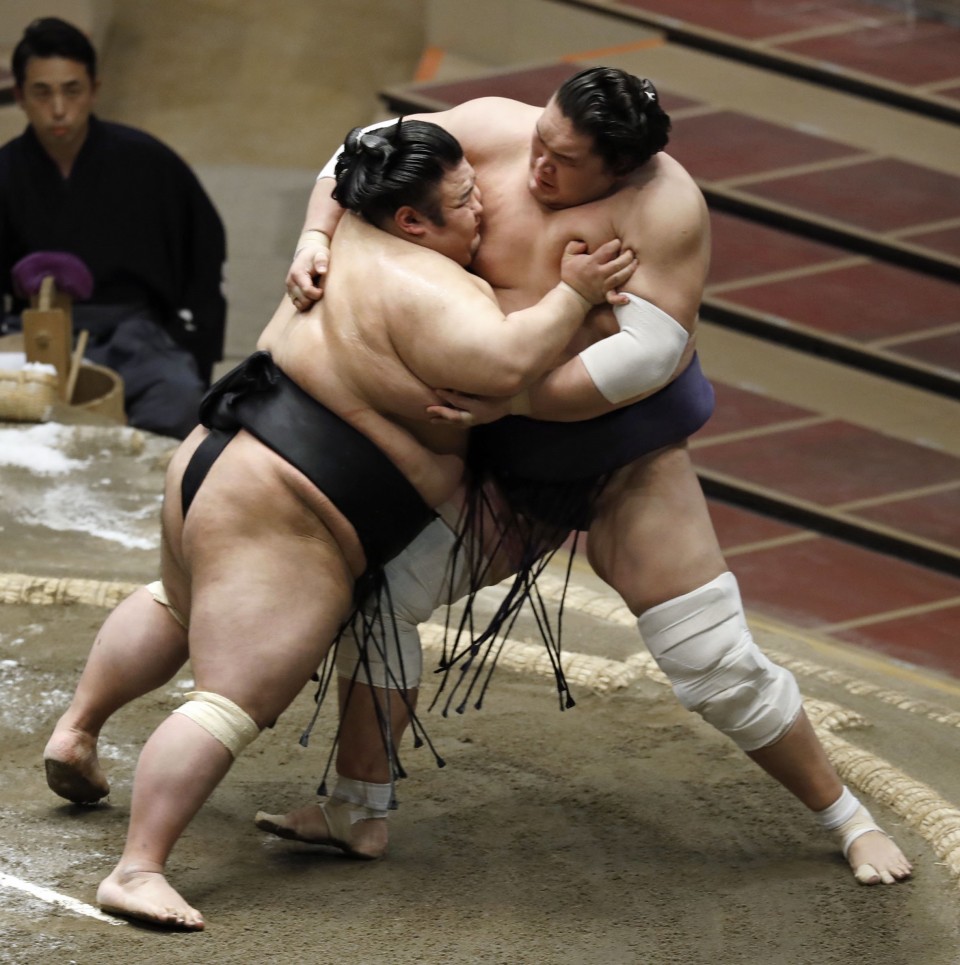 Takakeisho claimed his second Emperor's Cup by defeating title rival Terunofuji in a championship playoff at the November Grand Sumo Tournament on Sunday.

The 24-year-old ozeki was unable to seal the championship in the final scheduled bout of the 15-day tournament against komusubi Terunofuji, who earned a shot at a playoff victory after forcing down Takakeisho and drawing level at 13-2.

Having held his ground against Takakeisho's powerful thrusting attack, Terunofuji almost succumbed to a slap down but kept his footing before wrapping up the ozeki and dumping him to the clay.

But Takakeisho showed strong resolve in the playoff and stuck to his tried-and-tested techniques. Hitting hard and low from the jump, he denied Terunofuji a belt grip before pushing him back and out. 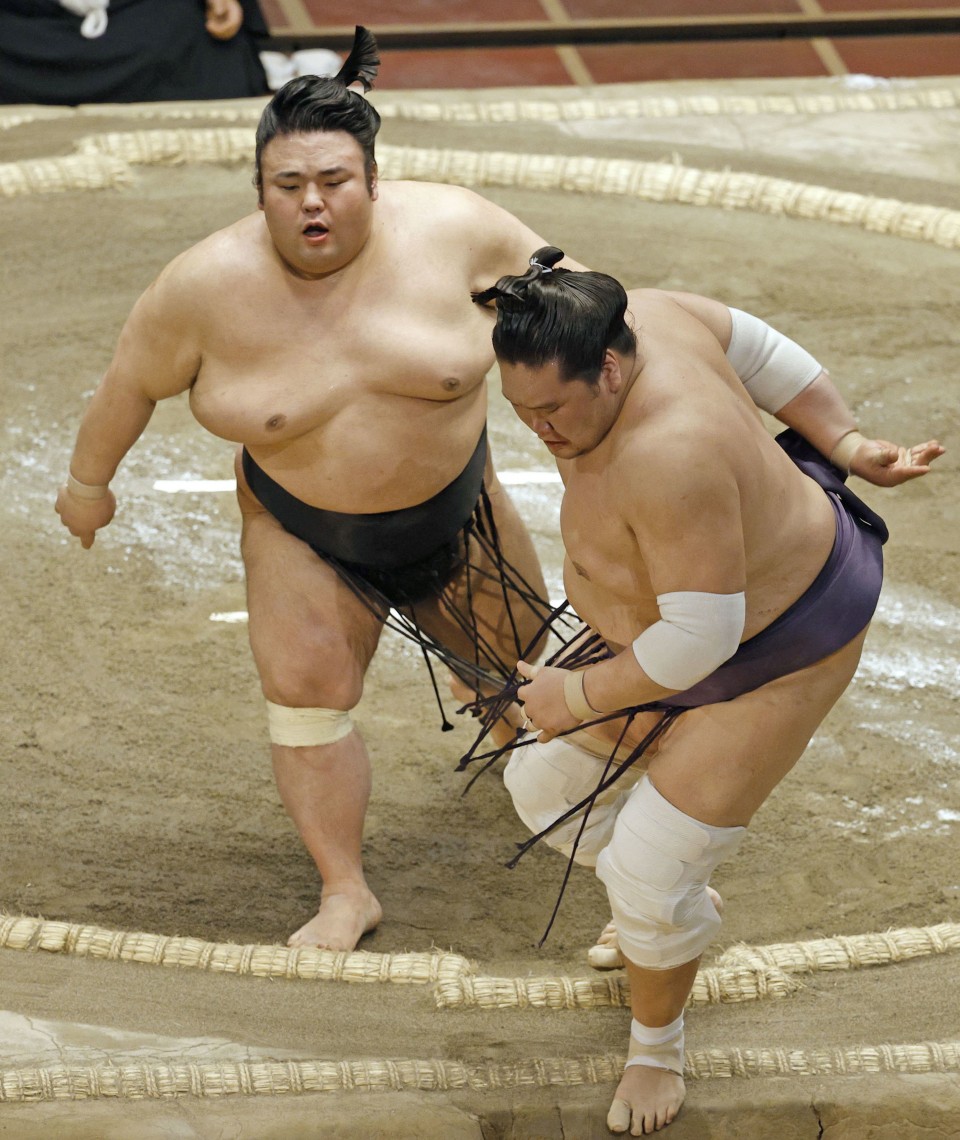 Takakeisho had carried the mantle of title favorite as the highest-ranked wrestler left at the tournament, which was moved to Tokyo's Ryogoku Kokugikan from its usual home in Fukuoka to limit the spread of the novel coronavirus.

Injuries forced the withdrawal of grand champions Hakuho and Kakuryu before the meet, while ozeki Asanoyama and Shodai pulled out in the early stages.

The championship is Takakeisho's first captured while fighting from sumo's second-highest rank. He won his maiden Emperor's Cup at the 2018 Kyushu Grand Tournament as a komusubi.

"I couldn't have won by myself. I was able to achieve this thanks to my stablemaster Chiganoura, his wife, and all the people that support me at the stable," said Takakeisho, who has struggled with injury since his ozeki debut in May last year.

"This result makes me very happy. Ever since I was promoted to ozeki, not many good things have happened to me. I knew I had to mentally weather the storm." 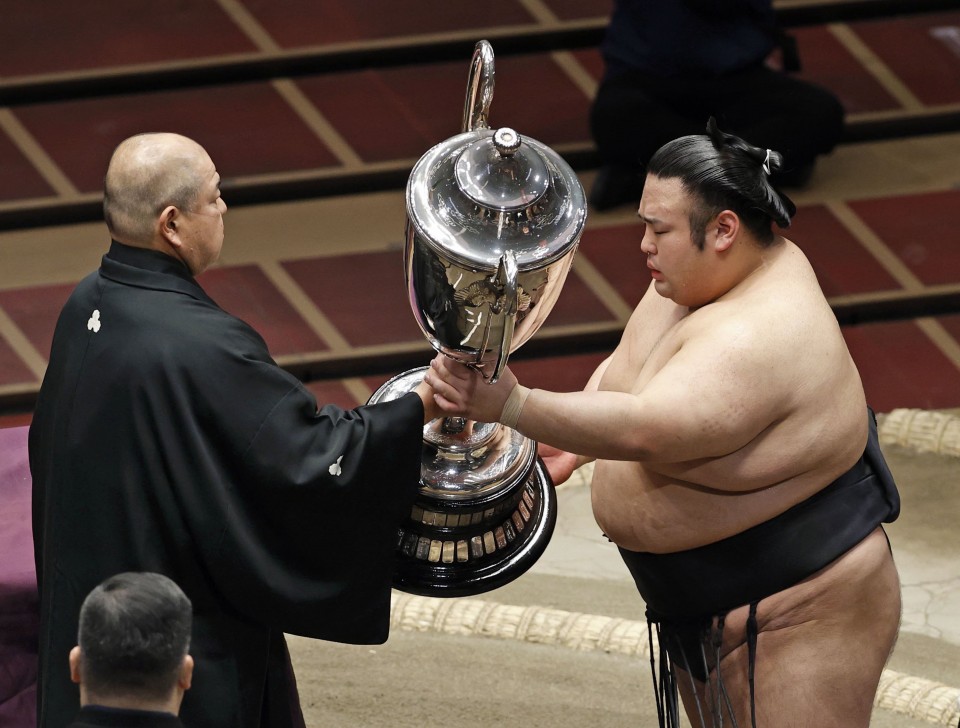 The runner-up finish continues a remarkable comeback story for 28-year-old former ozeki Terunofuji, who won the July tournament in his return to the top flight following multiple knee surgeries and a long climb back from sumo's fifth division.

The 173-kilogram wrestler, who possesses a rare combination of size and skill, lost out on his third Emperor's Cup but picked up Technique Prize.

"My bad habits emerged (in the playoff). My upper body came up too high," said Terunofuji. "Before this tournament, I was aiming for double-digit wins. So I achieved my goal, but then again, I came so close (to the championship)."

Sekiwake Takanosho (8-7) ended a solid debut in the elite "sanyaku" ranks below yokozuna with a slap-down loss to a former ozeki, No. 7 Tochinoshin (9-6).

Sekiwake Mitakeumi (7-8) broke a six-match losing streak by thrusting down No. 6 Takarafuji (9-6), who buckled quickly following a shaky initial charge.

Komusubi Takayasu claimed a winning record at 8-7 by forcing out No. 6 Tamawashi (8-7). The former ozeki got a firm hold of Tamawashi's belt at the jump and drove him straight out.

Among the rank and file, No. 7 Endo (8-7) secured a crucial eighth victory against No. 13 Hoshoryu, who finished one win short of the benchmark at 7-8.

No. 14 Chiyonokuni improved to 10-5 and snared a Fighting Spirit Prize in his makuuchi comeback tournament with an arm-lock throw victory over No. 9 Kotoeko (6-9).

"I could never have done it without the support of so many people," said the 30-year-old Chiyonokuni, who had fallen to the third-tier makushita division following a knee injury.

No. 17 Shimanoumi also earned a Fighting Spirit Prize after emerging as an unlikely title contender during the tournament. He finished at 11-4 following a loss to No. 10 Meisei (9-6).

Towering No. 13 Ichinojo clinched a winning record at 8-7 after toppling No. 16 Chiyoshoma (8-7). The former sekiwake, fighting at a trimmed-down 198 kg, has compiled two straight winning tournaments after climbing back from the juryo division.