Ongoing anti-government protests in Thailand, reflecting long-standing rivalry between pro-democracy forces and the royalist establishment, have ventured into uncharted territory by taking aim at the monarchy, an institution long considered untouchable.

In past years of political turmoil, during the reign of the much-revered King Bhumibol Adulyadej who died in October 2016 after 70 years on the throne, differences of political ideology might lead to bloodshed, but they spared the monarchy due to the widespread perception that it was "above politics."

The current generation of protesters name themselves after Khana Ratsadon, a group of coup makers who transformed the country's absolute monarchy to a constitutional monarchy in 1932, and have pressed three demands: monarchy reform, the exit of Prime Minister Prayut Chan-o-cha and a rewrite of the 2017 Constitution. 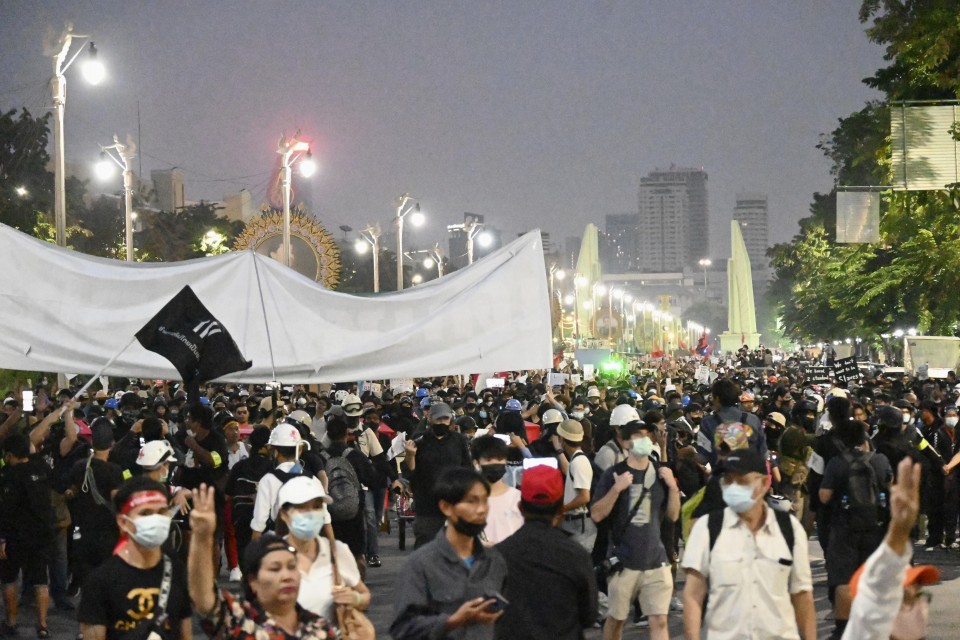 Pro-democracy demonstrators calling for reform of the monarchy march to the royal palace in Bangkok on Nov. 8, 2020, in an attempt to deliver messages to Thai King Maha Vajiralongkorn. (Kyodo) ==Kyodo

The three issues are intertwined because they assure the continuation in power of certain elitist groups, the protesters say.

While calling for political change, such as stripping the unelected Senate of its key role in choosing the prime minister, the protesters also seek to rein in King Maha Vajiralongkorn's accumulation of wealth and power, claiming it epitomizes "feudalism" in Thai society where gross inequalities persist.

Both the rallies and social media have seen an unprecedented degree of satire directed against the king, who spends bulk of his time in Germany with his entourage, rather than at home, to the chagrin of many younger generation Thais.

They charge that the monarch has interfered in politics by cultivating intimate ties with the military and helping Prayut, a former army chief and coup leader, cling to power.

By subjecting the king to public scrutiny, the protesters risk running afoul of Thailand's controversial lese majeste laws, which make defaming the monarch punishable by up to 15 years in prison.

Their actions have angered and offended many conservative Thais who continue to hold King Vajiralongkorn in high esteem -- much as they did his father -- and demand reverence and respect for the royal family.

Generally older than the youth protesters, such Thais have taken to social media, and sometimes to the streets, to support the monarchy and stress its importance to Thailand's culture and identity.

When he performs royal duties such as a recent religious ceremony at the Grand Palace and the inauguration of a new subway station in Bangkok, a sea of yellow-clad monarchists typically turns out to greet him, some of them humbly kneeling or crawling in his presence.

The stark contrast of messages from the pro-democracy and pro-monarchy groups has become the topic of everyday conversations in every quarter of the society, ranging from street gatherings to workplaces to families.

Their opposing stances also led to a new form of conflict that challenges the core values of the Thai people, one of which has long been the monarchy as one of the main pillars of the nation.

Older generations tend to feel gratitude toward the monarchy, which they believe has played an instrumental role in uniting Thailand and preserving its culture and identity for centuries.

Younger generations, however, are more apt to consider the institution as outdated and useless, and they look at the Western countries' democratic systems as their desired models.

Such a perception gap is reflected by a mother who views the monarchy as sacrosanct and whose daughter frequently joins the pro-democracy rallies.

The mother in her 40s, who asked not to be named, said she believes it to be a critical component of "Thai-ness" -- leading to daily arguments with her daughter.

"My daughter wants the (Prayut) government out and reform of the monarchy, claiming the king interfered in politics and endorsed the (2014) coup," she said. "She wants me to change my beliefs over the institution, but I refuse."

Some workplaces face a similar situation, with a senior staff in a well-known Thai company saying her boss stressed the need for the company to maintain a neutral stance and asked all staff to comply.

"We were told not to express any stance on social media, those who attend rallies must do so after work, and if something happens, they have to take responsibility," she said, adding the company considers the monarchy issue too sensitive to discuss.

A 19-year-old student who until recently participated in the anti-government rallies and her parents admitted that the protests have disrupted the once-peaceful atmosphere in the family, due to divergent viewpoints.

The student said she wants to see the Thai society overhauled, ranging from the Prayut government, amendment of the pro-military Constitution and monarchy reform. The previous, military-run government abused its power, while the current one came to power in an undemocratic way, she claimed.

"I want to see a change in my generation. The country should not be run by corrupt people. At the same time, the monarchy should be truly under the Constitution," she said.

In addition, she claimed that the expenses incurred in Germany by the world's richest monarch, as ranked by Forbes magazine, come from the Thai people's taxes.

Regardless of such harsh criticism and allegations against the king, her parents insist they still respect the monarchy despite knocking the government's performance in handling economic problems amid the COVID-19 pandemic.

"The monarchy has been with Thai society for a long time and is regarded as the soul of the nation...It's unacceptable to see them insult the monarchy at the rallies," she said, adding that her daughter is no longer allowed to attend them.

Stithorn Thananithichot, an academic from King Prajadhipok's Institute, holds out hope that the rift over monarchy reform can be resolved through constitutional change, though lawmakers recently rejected a charter rewrite that would limit the sovereign's power and repeal the lese majeste law as demanded by protesters.

"If the king listens to their request and opens the door for amending the Constitution, we can compromise," the political scientist said, suggesting a willingness to compromise is what is crucially needed to bridge the generations.

The king himself, in an apparent olive branch to the young activists on Nov. 1 after months of demonstrations in his kingdom, called Thailand "the land of compromise."

"We love them all the same," he said when questioned by a reporter, referring to the pro-reform demonstrators.