Prime Minister Yoshihide Suga on Friday maintained the government's "Go To Travel" campaign to support domestic tourism despite calls for the declaration of another state of emergency amid a resurgence of novel coronavirus infections in Japan.

The move came as the number of new cases totaled 1,704, topping the previous record high of 1,660 marked a day earlier, according to a Kyodo News tally based on official data, with health experts warning of a possible "third wave" of infections. 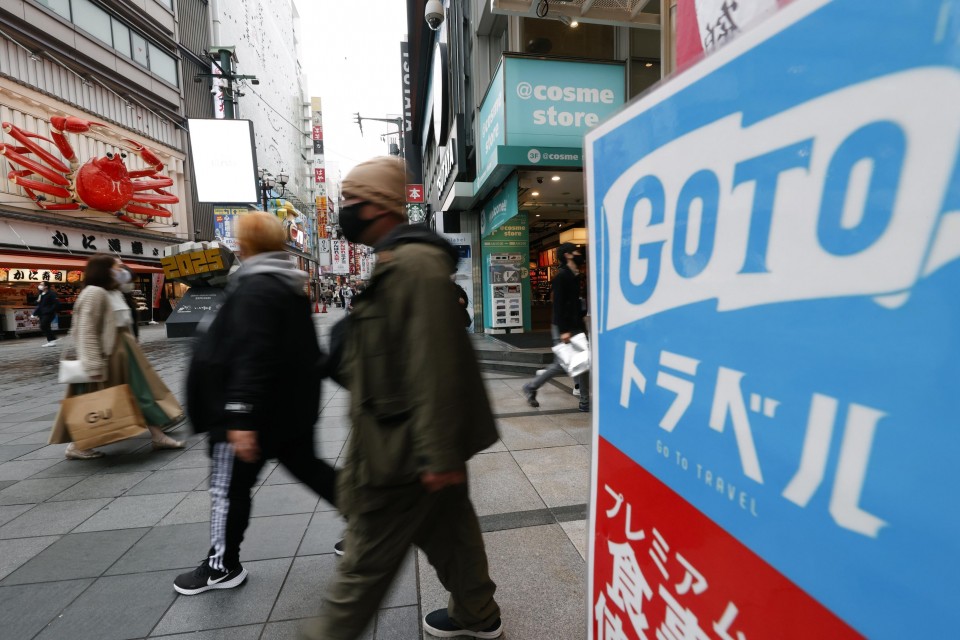 People wearing face masks walk by a sign (R) promoting the government's "Go To Travel" subsidy program on Nov. 13, 2020, in Osaka's Dotombori area amid a surge in coronavirus cases across Japan. (Kyodo) ==Kyodo

Though recognizing the "clear signs of an upward trend" in coronavirus cases, particularly in Tokyo, Osaka and Aichi prefectures as well as Hokkaido, Suga called on the public to take "basic preventive measures" to halt the spread of infections.

The government is working with local municipalities to conduct large-scale testing and send medical personnel to regions that are experiencing outbreaks, he said.

The prime minister also instructed his Cabinet members to tackle the situation with "the utmost vigilance."

To address growing concern about the resurgence of infections, the government said it is considering setting up a new post in the Cabinet Secretariat with enhanced authority to quarterback the country's anti-virus measures.

Opposition parties criticized the government's response to the pandemic, saying the latest rebound in infections stemmed from the government's measures to promote domestic tourism, a sector hit hard by the spread of the virus.

Kazuya Shimba, secretary general of the Democratic Party for the People, urged the government to review the travel promotion initiative.

Citing the surge of infections in Hokkaido, a popular tourist destination in northern Japan, Shimba said the development was "clearly attributable to the campaign."

"There is a possibility that movements (of people) will accelerate in the year-end and New Year period. We should seek advice from experts," he said.

Tomoko Tamura, policy chief of the Japanese Communist Party, said the government should end the promotion campaign across the country.

"If infections expand further, it will deal a severe blow to the tourism industry," Tamura said.

As of Friday evening, Japan's cumulative cases totaled 116,126, including about 700 from a cruise ship that was quarantined in Yokohama in February. The death toll has reached nearly 1,900.

By prefecture, Tokyo saw the largest number of new cases at 374, remaining above 300 for a third consecutive day and bringing the capital's cumulative total to 34,144.

Osaka was second with a record 263 cases, followed by Hokkaido at 235.

The government declared a state of emergency in some parts of the country in early April and later expanded it nationwide, calling on the public to remain at home and asking some businesses to temporarily shut, in a blow to the economy.

Suga has indicated that he wants to strike a balance between curbing the spread of COVID-19 and keeping up social and business activities.