Prosecutors on Thursday demanded the death penalty for a man dubbed Japan's "Twitter killer" after he was indicted over the 2017 serial murder of nine people who had posted suicidal thoughts on social media, a high-profile case that shocked the nation.

In a lay judge trial at the Tachikawa branch of the Tokyo District Court, prosecutors sought the death penalty for Takahiro Shiraishi, 30, who pleaded guilty to murdering, dismembering and storing the bodies of the nine in his apartment near Tokyo. 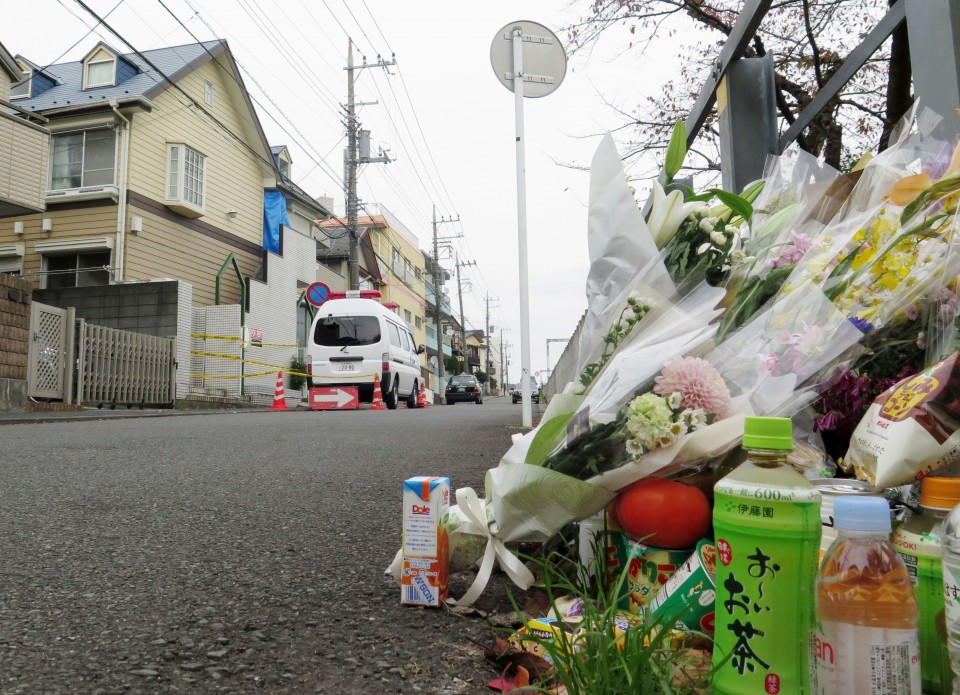 Flowers and drinks are seen on Nov. 20, 2017 on a street near the apartment complex in Zama, near Tokyo, where nine dismembered bodies were found in late October at the home of suspect Takahiro Shiraishi. (Kyodo) ==Kyodo

"Nine young lives were taken in such a short period of two months," a prosecutor said, adding that his crimes "deserve death."

Prosecutors also pointed out that there was no way the victims consented to being killed based on Shiraishi's testimony that they resisted when being strangled.

Throughout the trial, Shiraishi maintained "there was no consent" given by his victims, but his defense lawyers argued that he had their tacit approval as they met after sending direct messages to the defendant on Twitter such as "Let's die together" and "Please (kill me) by hanging."

His defense team claimed Shiraishi is therefore guilty only of the lesser charge of homicide with consent and that the victims must have resisted when they were being strangled due to their "conditional reflexes."

Shiraishi said Wednesday he expects to receive the death penalty, adding, "I humbly admit my guilt and will accept the punishment."

After hearing the prosecutions call for him to be executed, Shiraishi maintained a calm demeanor and showed no emotion.

The defense has also argued Shiraishi was possibly either mentally incompetent or was in a state of diminished capacity at the time and should not be held criminally liable.

Before indicting him in September 2018, prosecutors concluded Shiraishi can be held criminally liable after he was put through five months of psychiatric testing.

According to the indictment, Shiraishi strangled and dismembered eight women and one man aged 15 to 26 from Tokyo and four other prefectures from August to October of 2017.

He is believed to have communicated with his victims, using his Twitter handle which is loosely translated as "Hangman," inviting them to his apartment after they expressed suicidal thoughts with the promise of helping them die.

The bodies were discovered inside containers, including cooler boxes, in his apartment in the Kanagawa Prefecture city of Zama.

He is also alleged to have stolen cash from the victims and sexually assaulted all of the women.

On Thursday, a total of 144 people queued to draw lots for the 16 public seats available in the courtroom. The court is scheduled to hand down a ruling on Dec. 15.