While inter-Korean ties may have lapsed back into deep freeze, interest in the South, especially among young people, about what everyday life is like in their isolated northern neighbor is rising, changing the landscape, some experts say, for the long-term future of the relationship.

Social media is playing a large part in giving air to new perspectives, with a number of millennial North Korean defectors going online to share their experiences of life back across the border, some of them even becoming YouTube stars in their adopted land. A recent smash-hit TV drama, meanwhile, has presented what critics view as a groundbreaking portrayal of the North, including what ordinary life is like for its more affluent citizens. 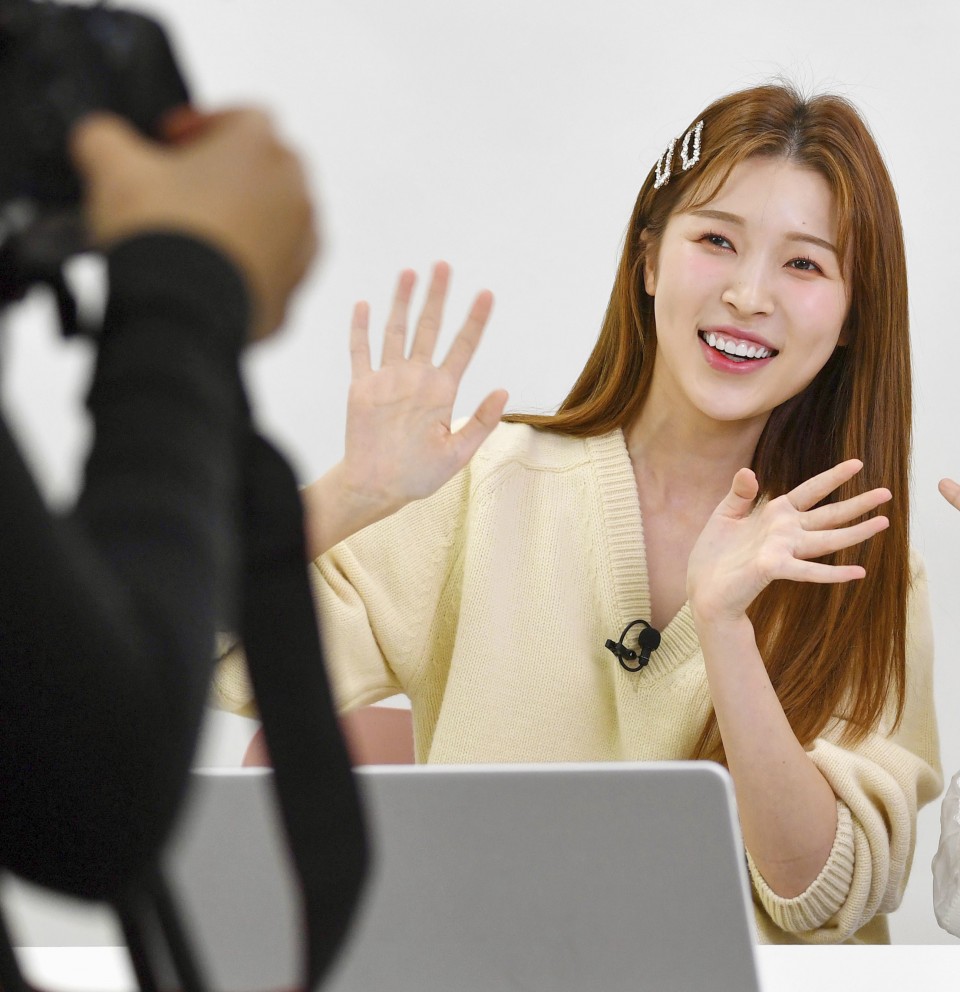 Kang Nara is a 23-year-old YouTuber who came to South Korea in December 2014. In her videos, she talks about her early life as a member of the affluent class herself in the North and chronicles her adult life in the ultramodern South.

Her channel, "Nol-sae Nara," has over 100 videos and more than 233,000 subscribers. "Nol-sae" is a phrase used in North Korea to refer to people who are wealthy without having had to work too hard for it.

In one of her most popular clips, she introduces products from South Korea that North Koreans crave, and relates her own experiences using them. In the North, South Korean products can be very expensive and out of reach for many.

Kang said that when she started uploading her videos several years ago, she simply wanted to tell her story through her own "me-media" -- a story based on her years as a member of a well-off family in North Korea.

"The reason I got attention from the public in the first place was because I was wealthy even when living in North Korea," said Kang, who rose to public notice after an appearance on South Korean TV to talk about her experiences as a defector.

"I wanted people to know what rich people's lives are like in North Korea," she said.

Today over 33,700 North Koreans live in the South after fleeing their country in the decades since the 1950-1953 Korean War ended in a cease-fire rather than a peace treaty, according to the Unification Ministry. Kang belongs to a new generation of defectors, those in their 20s and 30s who number over 19,200, according to the ministry's September data.

Kang, who is also active on Instagram, says young YouTube creators who fled the North like her are being born almost every day, although few may reach the success she has had.

"Out of about 50 North Korean defectors who actively upload video content on their YouTube channels, about 30 are young adults whose target viewers are younger generations of South Koreans," she said.

The timing has also worked in Kang's and her cohorts' favor.

Kang's videos caught the attention of young South Koreans at a time when their curiosity toward their northern neighbor was piqued due to "Crash Landing on You," a melodrama focusing on a romance between a South Korean woman who accidentally lands in North Korea and a North Korean soldier from an elite family.

The K-drama, which ran in the South from December last year to February this year, became a huge hit not only at home but also abroad.

"While I was watching the drama, I felt like I wanted to know more about real life in North Korea," said Kim Suha, a 27-year-old office worker and a fan of YouTube clips featuring young North Korean defectors.

"What the defectors say about North Korea is actually very different from what I used to think. It's not like they are all really poor as we had imagined," Kim added.

Experts say that changes in perceptions like Kim's seem to be widespread among young South Koreans, who in the past have generally shown less interest in the reunification of the two Koreas than older generations and less of a sense of the populations of the two countries being one people.

Yun Suk Jin, a professor of Korean literature at Chungnam University who has regularly appeared as a critic on cultural issues for South Korean TV programs, said that "Crash Landing on You" offered a chance for young adults who had previously only viewed the country through the lens of politics to think differently about it.

"They finally came to think that people do live in that country and actually in quite a similar way to South Koreans," said Yun.

Yun said these changing perceptions could even prompt younger people to take a more favorable attitude toward the efforts President Moon Jae In's government had launched to achieve a peace treaty and declare an end to the Korean War. 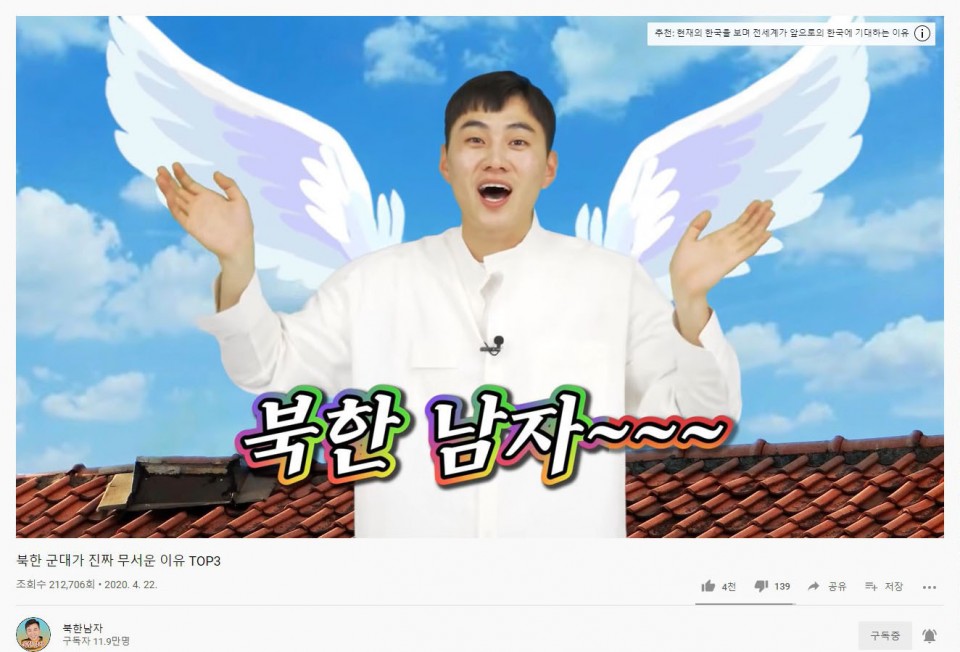 Screetshot from a video that North Korean YouTuber Pak You Sung uploaded on his channel. (Kyodo)

Pak You Sung, a 28-year-old YouTuber who came to South Korea in 2007 as a teenager and runs a channel named "A Man from North Korea," also agreed that the drama played an important role in cultivating a positive image of North Korea among the public.

"When the drama was airing, I received a lot of comments under my videos, such as 'I also want to crash-land in North Korea if what the drama shows is true' and 'I'd like to visit North Korea for fun,'" said Pak, who has about 120,000 subscribers.

Even North Korea itself seems to have recognized the potential for YouTube videos to soften its image in the South and elsewhere. Channels that appear to have official blessing such as New DPRK and Echo of Truth present what they say is everyday life for North Koreans.

New DPRK, with 16,500 subscribers, posts vlogs that cover the daily life of North Koreans from children to adults, while in Echo of Truth (43,200 subscribers), a female reporter speaking English who introduces herself as Eun-A explains different aspects of the country. DPRK is the acronym of the Democratic People's Republic of Korea, the North's official name.

YouTuber Pak, though, said the mood turned for the worse after ties between the two Koreas began to sour this year, with North Korea demolishing in June an inter-Korean liaison office and its troops then allegedly killing in September a South Korean government worker who had drifted into North Korean waters.

He says he began to get more negative and abusive comments -- a pattern he says is repeated every time trouble brews between the two Koreas.

Hopes had run high when Moon and North Korean leader Kim Jong Un met several times in 2018 and discussed various types of inter-Korean projects like connecting railways across the border.

People spoke of unification on the divided peninsula, however remote it seemed.

But the proposed projects went nowhere amid a stalemate in denuclearization talks between the United States and North Korea following the collapse of a summit Kim held with U.S. President Donald Trump in February 2019.

"We now think everything (about unification) was just a big lie because all our expectations that we had around the time of inter-Korean summits are just gone," she said.

Both Kang and Pak say they hope to see exchanges deepen at the people-to-people level, even if complete unification is impossible.

"I think that is the possible form of unification that we can achieve," said Pak.

Kang, too, has her eye on the future.

"I hope my videos will be used as a helpful lecture for both North and South Koreans when our ties get better again," Kang said.