Local authorities in western Japan began culling around 330,000 chickens Thursday after an outbreak of a highly pathogenic avian flu was confirmed at a chicken farm for the first time in nearly three years in the country.

The Kagawa prefectural government instructed chicken farms within a 3-kilometer radius of the infected site in Mitoyo not to move any poultry and eggs, and was checking whether infections had occurred at other locations.

Farms within a 10-km radius are banned from transporting birds and eggs out of the area. The infected farm reported Wednesday a total of 3,800 chickens had died over a four-day period. 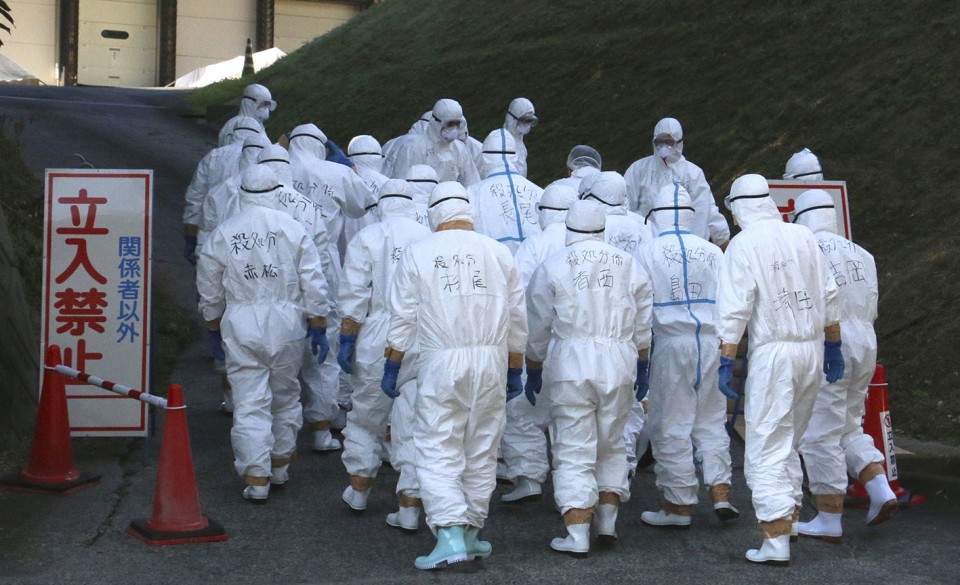 Workers in protective suits enter a chicken farm in Mitoyo in Kagawa Prefecture, western Japan, on Nov. 5, 2020, after an outbreak of a highly pathogenic avian flu was confirmed there. (Kyodo) ==Kyodo

The measures cover around 4.62 million chickens at 115 farms within the 10-km radius, but as of Thursday morning there were no reports of other mass poultry deaths in the zone, according to the prefectural government.

It is expected to take around 10 days to complete the cull.

The Ground Self-Defense Force joined the operation at the request of the prefectural government.

"I don't understand how the infection originated since we had studiously implemented sanitation measures," said the president of the company operating the infected farm. "I have no choice but to wait for instructions from the authorities."

Poultry farmers in the area expressed concern about the impact on their businesses.

"I'm in trouble because I can't ship eggs unless (my chickens) are confirmed negative in tests," said a man in his 60s who runs a poultry farm within the 3-km zone.

Hiroaki Ando, 59, who runs a farm within the 10-km zone, said, "I can only pray that my chickens have not been infected."

The last avian flu outbreak in Japan in January 2018 also occurred in Kagawa Prefecture, which is located on the main island of Shikoku. The farm ministry said Japan will suspend the export of chickens and eggs for the time being. 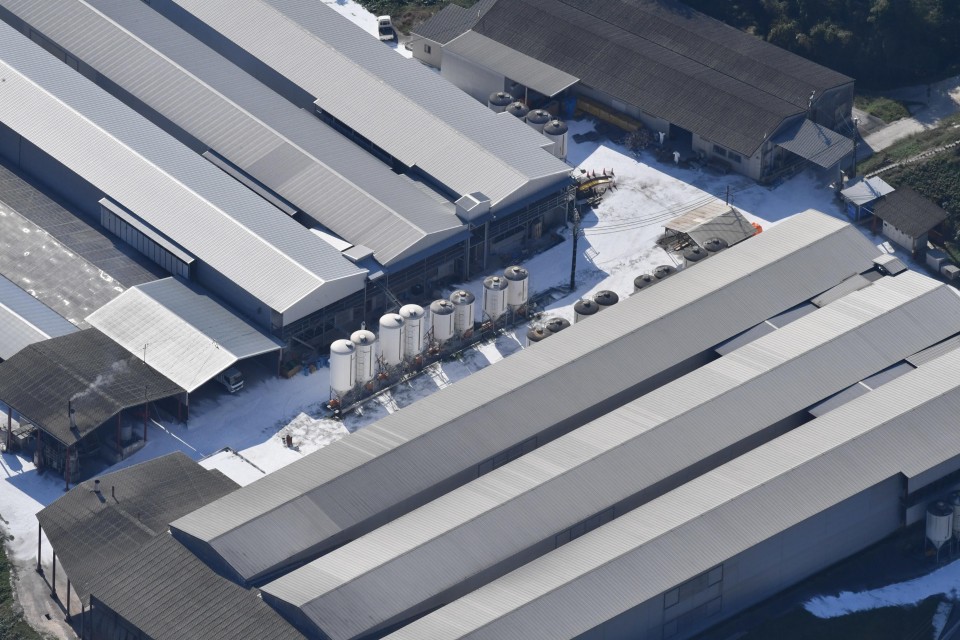 Photo taken on Nov. 5, 2020, from a Kyodo News helicopter shows a chicken farm in Mitoyo in Kagawa Prefecture, western Japan, where an outbreak of a highly pathogenic avian flu was confirmed. (Kyodo) ==Kyodo

"The government will work as one and take full-blown measures to prevent the spread of infections," said Chief Cabinet Secretary Katsunobu Kato at a Cabinet meeting on the outbreak.

Yasuhiro Hanashi, a senior vice minister of agriculture, forestry and fisheries, visited Kagawa Gov. Keizo Hamada to promise aid to prevent the spread of the disease as well as reputational damage to the local industry.

"There is no problem even if consumers eat eggs and meat from chickens infected with the disease. I ask people not to worry excessively," Hanashi said, adding that his ministry had sent an epidemiological investigation team.

The Environment Ministry raised its nationwide alert for wild birds to the highest of three levels. The alert was raised to two last week following a bird flu outbreak in South Korea.

The ministry is increasing surveillance for suspicious deaths of wild birds within a 10-km radius of the infected farm in Kagawa.