Experiments on mice that were taken to the International Space Station have shown an internal protein has the potential to help slow the aging process, according to a joint study by the Japan Aerospace Exploration Agency and Tohoku University.

While in space, the mice went through biological changes similar to aging, only fast-forwarded, and the protein -- called nuclear factor erythroid 2-related factor 2, or Nrf2 -- slowed down part of the transformation, JAXA said. 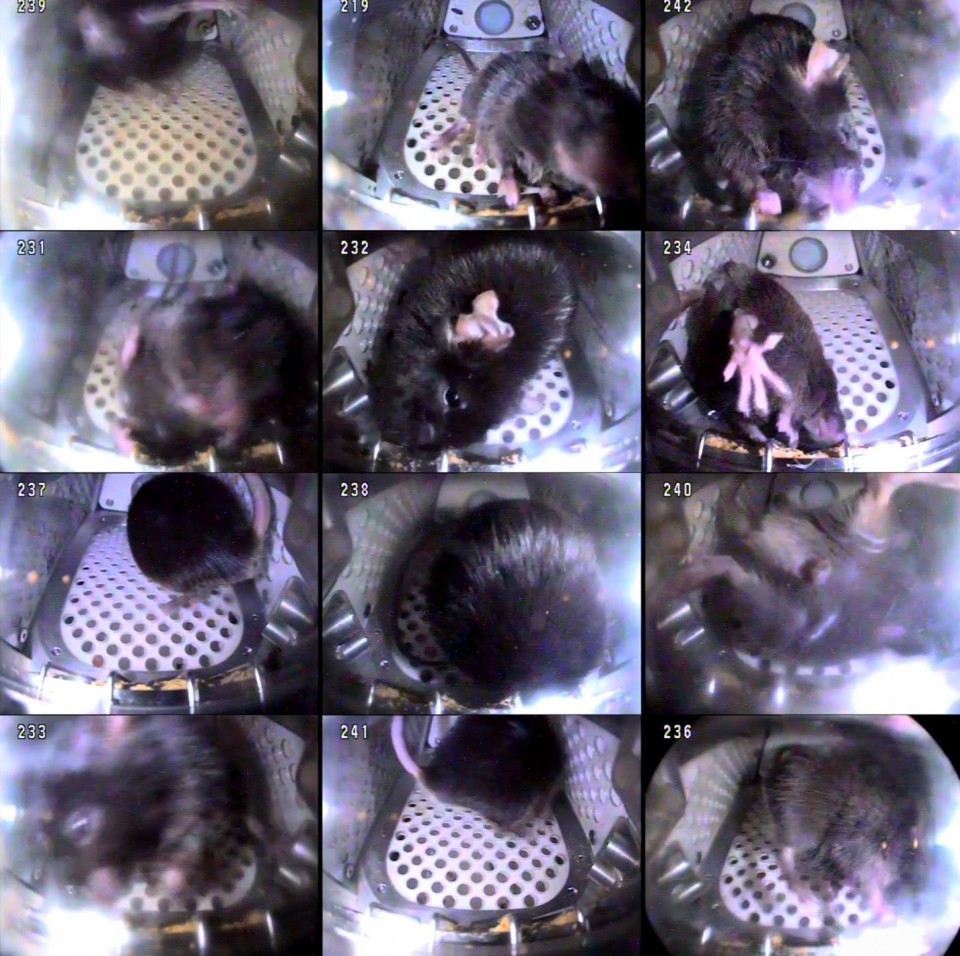 A screenshot of a supplied video clip shows 12 model mice that were taken to the International Space Station in 2018. (Photo courtesy of Tohoku University)(Kyodo)

A team of scientists from the space agency and the university hope the discovery will pave the way for the development of drugs to treat a broad range of illnesses associated with old age, such as Alzheimer's, dementia and diabetes.

Amid micro gravity and radiation stronger than on the ground, spaceflight is known to cause various aging-like physical deteriorations including the loss of bone density and muscle mass.

According to the study, 12 mice spent 31 days in Japan's Kibo science module on the space station, having been transported there on board a SpaceX Falcon rocket in spring 2018.

Of the 12 "space mice," half had been genetically engineered to lack Nrf2, a known regulator to switch on and off the stress defense mechanism, while the other half remained unmodified.

Comparative studies on the two groups showed the ones without Nrf2 experienced an acceleration of changes in blood components similar to those induced by aging, while the other six showed little such transformation.

All the mice were 11-weeks old at the time of the launch and still gaining weight. But those without Nrf2 did not put on any weight once in space, despite there being no notable differences in food and water intake among the two groups, the team said.

"The results highlight the significance of the role Nrf2 plays in cushioning the impact of space-derived stress," said Masayuki Yamamoto, the medical biochemistry professor at Tohoku University who led the study.

Since the blood transformation observed in the genetically modified mice similarly occurs among old people on the ground, Yamamoto's team believes Nrf2 could be a key agent in helping decelerate aging.

JAXA said therapies to activate Nrf2, which are already under development, will benefit not only patients with age-related diseases but also astronauts as the era of manned probes to Mars draws near.

The team also said the results are promising to researchers because it is now possible to reproduce aging in a significantly shorter span in space that it takes experimenting on animals on Earth to develop drugs and other forms of therapies.

JAXA and Tohoku University have been working closely to promote the use of ISS as a hub for research aimed at extending health span and longevity.