Title favorite Takakeisho took another step toward the Emperor's Cup on Friday by pushing out joint overnight leader Shimanoumi at the November Grand Sumo Tournament.

The lone ozeki grabbed the outright lead at 12-1 after starting Day 13 in a two-way tie with No. 17 maegashira Shimanoumi, who had yet to face any wrestlers from the elite ranks at Tokyo's Ryogoku Kokugikan. 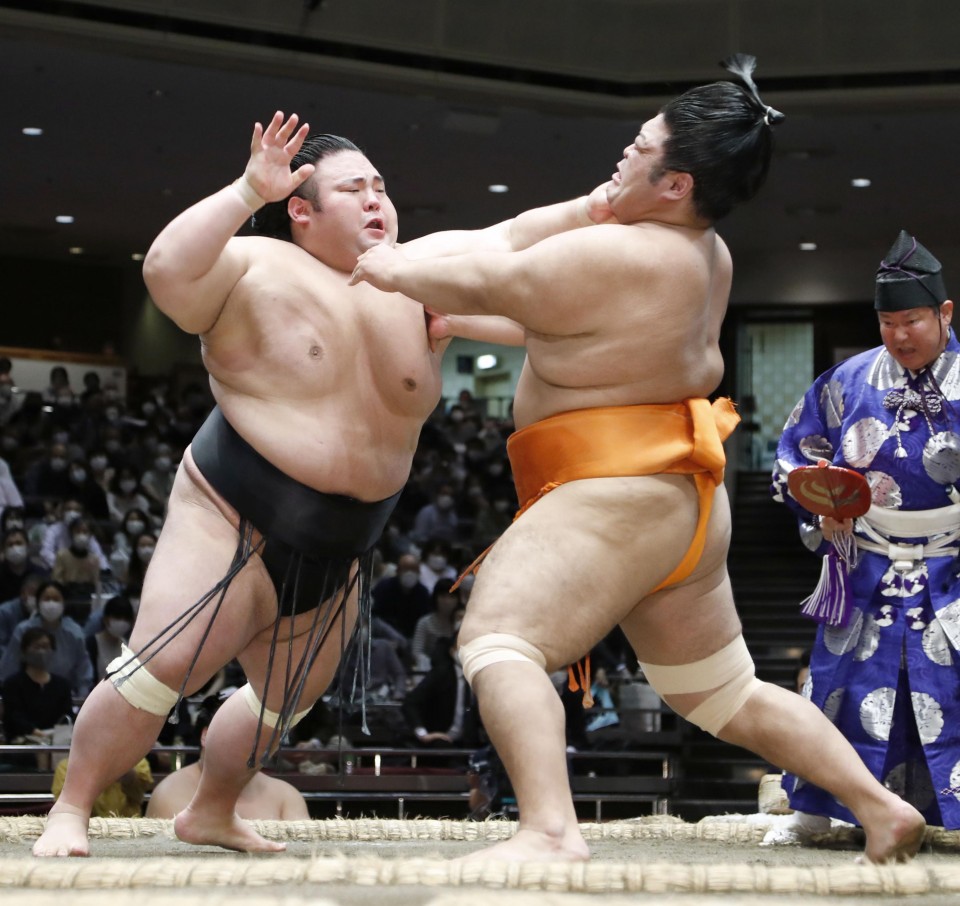 Takakeisho was on the front foot throughout the day's final bout, but was nevertheless tested by the lower-ranked wrestler, who withstood an initial pushout attempt before being spun around and shoved from the other side of the ring.

The 24-year-old Takakeisho carries the weight of expectation at the 15-day tournament, where injuries have sidelined both grand champions, Hakuho and Kakuryu, as well as ozeki Asanoyama and Shodai.

Shimanoumi (11-2), meanwhile, is trying to emulate the unlikely success of Kise stablemate Tokushoryu, who won the January championship as a No. 17 with a 14-1 record.

Takakeisho's path toward a second top-division championship is almost certain to run through resurgent komusubi Terunofuji, who stayed one win off the pace at 11-2 by defeating No. 10 Ryuden.

Former ozeki Terunofuji, who won the July meet -- also as a No. 17 -- in his return to the elite makuuchi division, exhibited his rare combination of strength and technique on the way to the victory over Ryuden (9-4).

Opening with a hard charge, the 28-year-old Mongolian fended off a hold while getting his hands through Ryuden's defense and pushing him out.

Takakeisho's Chiganoura stablemate, Takanosho, stayed in the hunt for a winning record in his sekiwake debut, improving to 7-6 by driving out Mitakeumi.

Takanosho had the early momentum in the clash of sekiwake and kept moving forward as he toppled Mitakeumi (6-7) from the raised ring.

No. 4 Tobizaru (5-8) denied komusubi Takayasu (7-6) an all-important eighth victory while displaying the attacking flair that made him a crowd favorite during his top-division debut in September.

Tobizaru pushed Takayasu to the edge but was unable to dislodge the bigger, heavier komusubi, who forced the action back to the middle of the ring. With neither gaining an advantage, the maegashira went to his bag of tricks and brought Takayasu to the clay with a "kekaeshi" foot sweep.

Among the rank and file, No. 10 Meisei and No. 15 Chiyotairyu each secured a crucial eighth victory at 8-5 to ensure a winning record for the tournament.