The United States and Taiwan on Friday held the first meeting of their new economic dialogue as U.S. President Donald Trump's administration continues to show vocal support to the self-ruled island as it comes under increasing pressure from mainland China.

The Economic Prosperity Partnership Dialogue covers a broad range of issues, including next-generation 5G networks and telecommunications security amid Washington's push to exclude Chinese companies from such key infrastructure used in the United States as well as in like-minded nations and territories. 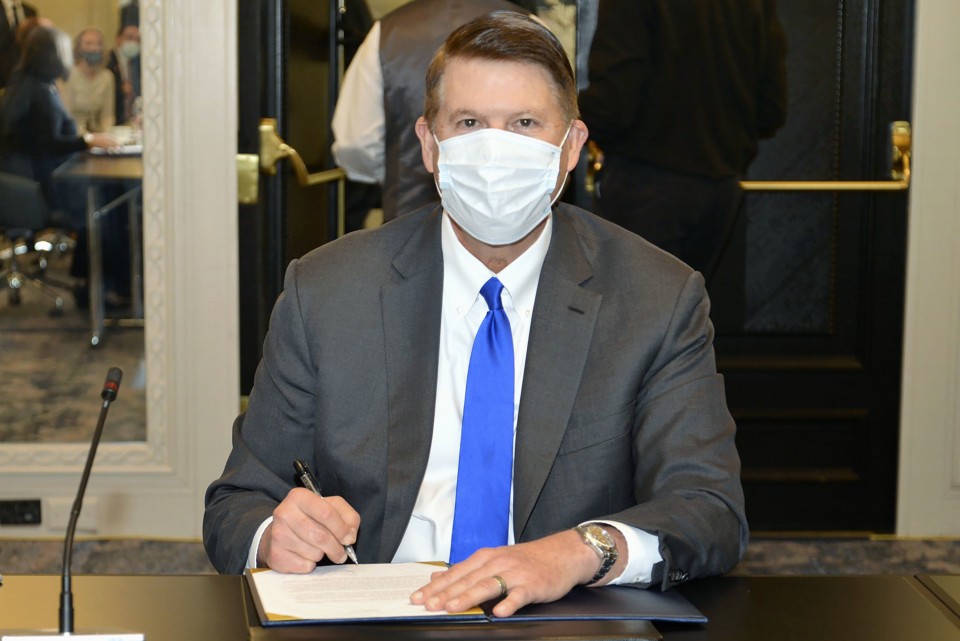 Keith Krach, undersecretary of state for economic growth, energy and the environment, on Nov. 20, 2020, in Washington. (Central News Agency/Kyodo)

The talks were "an opportunity to continue work in existing areas of economic cooperation while also forging new economic ties between the United States and Taiwan," the U.S. State Department said in a statement.

The two sides also discussed supply chains, investment screening, renewable energy, global health and women's economic empowerment, among other issues. They also announced their intention to negotiate an agreement to advance collaboration on science and technology topics, the department said.

The two sides have confirmed plans to hold the talks every year alternately in Washington and Taipei, Taiwan's Ministry of Economic Affairs said Saturday.

Foreign Minister Joseph Wu indicated at a press conference in Taipei the same day that Taiwan intends to seek stronger ties with the United States regardless of any change of administration in Washington.

"The success of today's dialogue advances the U.S.-Taiwan economic partnership to a new level," the Taipei Economic and Cultural Representative Office in Washington, Taiwan's de facto embassy in the United States, said in a press release.

The U.S. delegation was led by Keith Krach, undersecretary of state for economic growth, energy and the environment. From Taiwan, Deng Chen-chung, minister without portfolio, Economic Minister Wang Mei-hua and other officials attended the dialogue virtually.

Hsiao Bi-khim, who represents the office, said in the press release that she hopes the economic dialogue meetings will continue in future to serve as "one of the vital high-level dialogue channels between the United States and Taiwan."

The launch of the economic dialogue was initially announced by the United States in late August. Since then, Republican President Trump was defeated in the Nov. 3 election by Democratic challenger Joe Biden, causing some uncertainty about the future of the meetings.

Taiwan and mainland China have been separately governed since they split in the wake of a civil war in 1949.

While Washington switched its diplomatic recognition from Taipei to Beijing in 1979, the Trump administration has been stepping up its support to the democratic island amid a widening U.S.-China confrontation on issues including trade, technology and Hong Kong's autonomy.

In August, U.S. Health and Human Services Secretary Alex Azar became the nation's most senior official to visit Taiwan since 1979. The following month, Krach also traveled to the island.

Beijing considers Taiwan a renegade province awaiting reunification, by force if necessary. It is also particularly wary of any U.S. moves that appear to be official contact with the island's government.

Taiwan thanks Pompeo for support after "not part of China" remarks