The steel gates of a high wall topped with barbed wire clang open, revealing prisoners so malnourished that skin hangs from their cheeks and their bodies resemble little more than skeletons. An old man who claws at a group of shocked newcomers as he begs for food is met with a swift beating by guards.

This harrowing scene is just a precursor to the hellish life that awaits 9-year-old Yohan, his sister and their mother in "True North," a CGI-animated film debut by writer-director-producer Eiji Han Shimizu depicting the cruel conditions of North Korean political prison camps. 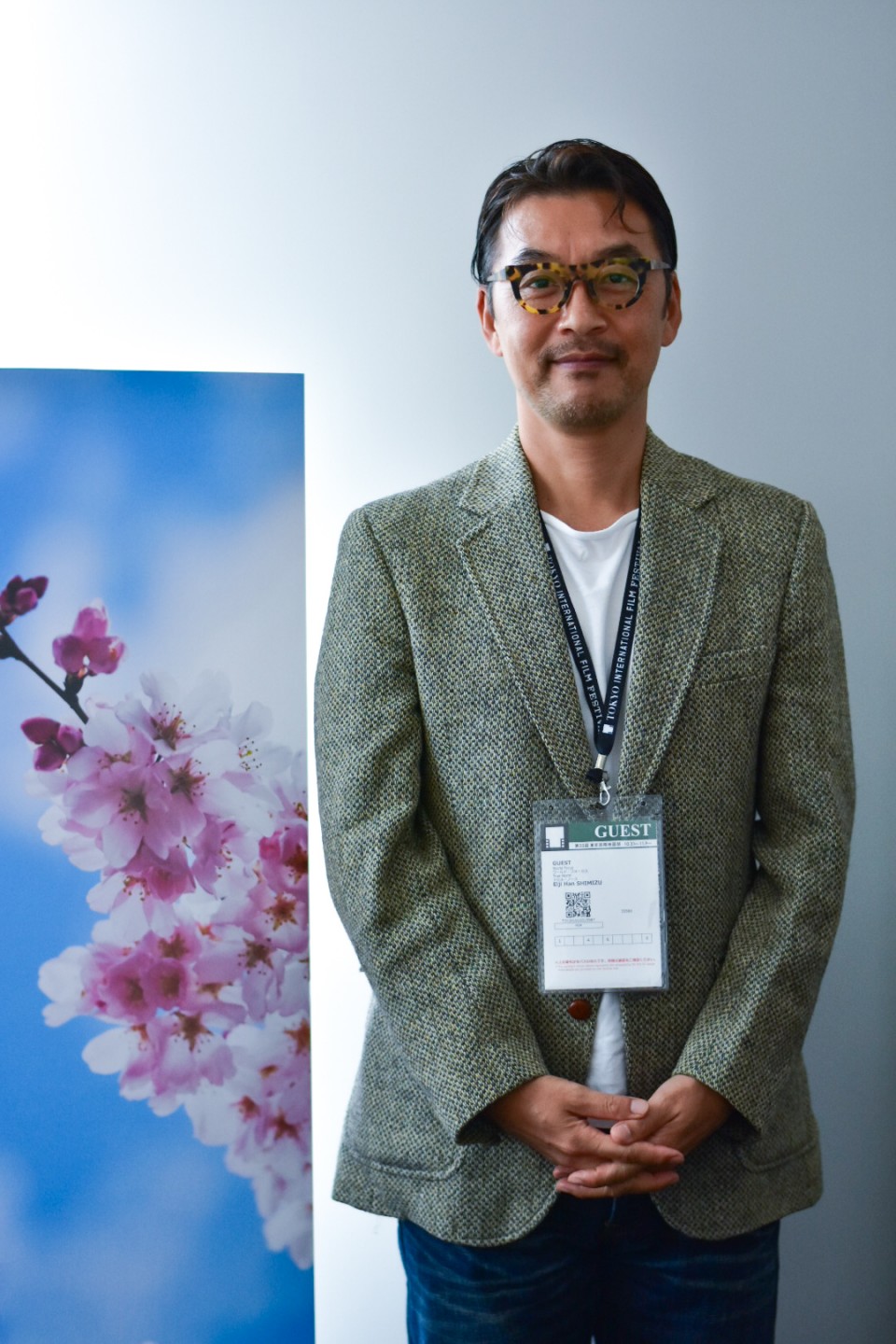 Director Eiji Han Shimizu poses for a photo on Nov. 3, 2020, at the 33rd Tokyo International Film Festival, where his CGI animated film "True North" had its Japan premiere. (Kyodo)

The film, which had its Japan premiere at the 33rd Tokyo International Film Festival, centers around a family sent to one such camp after their father is accused of being a spy.

While the characters are fictitious, the scenes of brutality, forced labor, rape and malnutrition are based on the testimonies of camp survivors and former guards from the Democratic People's Republic of Korea, North Korea's official name.

As a young child in Japan, Shimizu, who is a fourth-generation Korean Japanese, vaguely recalls his grandparents telling him that he would be sent to a North Korean prison camp if he misbehaved.

"Back then I didn't know what it was, but I remembered there was this very scary place on Earth. Like hell. I knew that something wrong existed somewhere in the world," the 50-year-old said.

During the 10 years it took to make the film, Shimizu interviewed around 30 former concentration camp prisoners and other defectors, including a number of ethnic Koreans who had left Japan for North Korea as part of its "Paradise on Earth" campaign but had subsequently escaped.

From 1959 to 1984, around 93,000 people -- mostly ethnic Koreans but also around 2,000 Japanese spouses -- were lured from Japan to North Korea under the auspices of the propaganda campaign, according to a 2014 report by the U.N. Human Rights Council.

The movement, which was organized by the Japanese Red Cross and the Red Cross of the DPRK, the acronym for the North's formal name, was seen as a humanitarian undertaking as Japan, at the inception of the program, was still recovering from its defeat in World War II and had insufficient food supplies.

Given the systematic discrimination they experienced in Japan, many ethnic Koreans were attracted by the program and its promise of free health care and opportunities for higher education, among other benefits. But the promises couldn't be further from what really awaited them in the fatherland.

"Many people who moved to North Korea with limited financial resources got all their possessions confiscated upon their arrival," Shimizu said. "The North Korean regime held the newcomers hostage, and kept asking ethnic Korean (relatives) from Japan to send more money."

The 2014 report said there are up to 120,000 prisoners detained in political prison camps in the country. 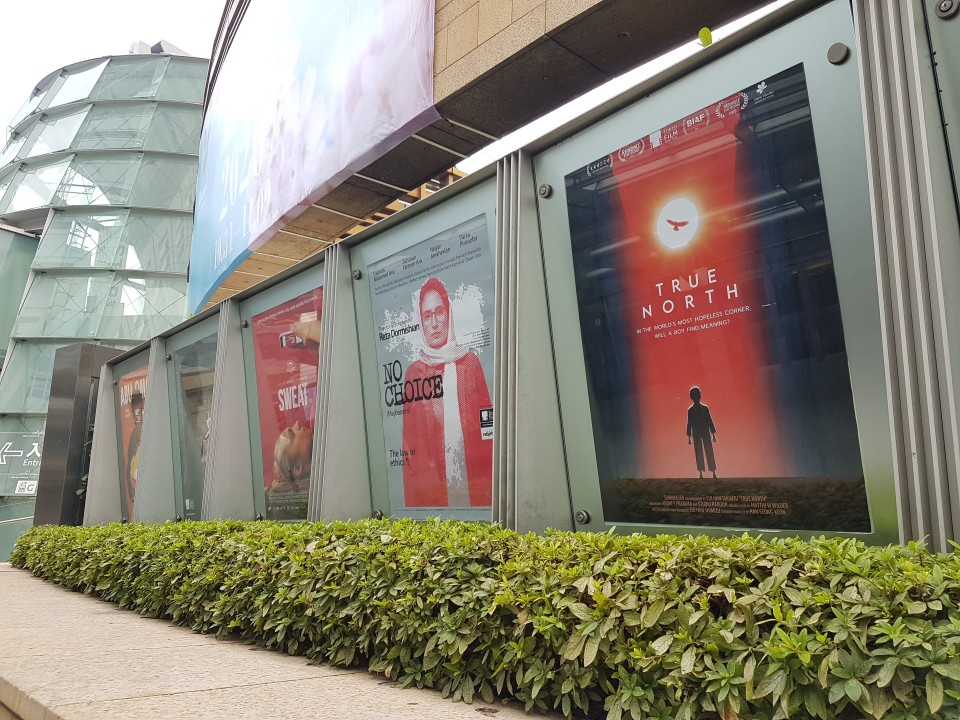 Posters including for "True North" are displayed at the 33rd Tokyo International Film Festival at Roppongi Hills in Tokyo on Nov. 3, 2020. (Kyodo)

But despite its shocking content, the story told in "True North," covering the period from 1995 to the present day, contains a raw message of hope, and the possibility of finding meaning even in the darkest of times.

For Shimizu, "meaning" is a theme that hits close to home. Once a normal salaryman who lacked nothing materially, he quit his job due a feeling of emptiness and spent around seven years traveling the globe in search of happiness.

The journey culminated in a documentary called "Happy" released in 2012. But Shimizu felt his journey of discovery was not yet over.

Using his own resources, he lived in Indonesia for seven years as he worked with Andrey Pratama and other young animators he recruited to help bring "True North" to life.

Making the film finally brought the meaning he craved.

"I felt that through this 'True North' project all these elements (of who I am) started getting connected to each other. In a funny way, my silly life makes sense. And that is a euphoric feeling of happiness. And so it's part of my happiness journey," he said.

Shimizu's greatest fear is that when the day eventually comes for North Korea to enter the international arena with the scrutiny it brings, it will seek to eradicate all evidence of its human rights abuses. And that would include getting rid not just of its concentration camps but also their prisoners.

Shimizu hopes that by raising awareness about the camps, the film will make it a little harder for the North to ever resort to such a genocidal undertaking.

"When the leader (goes to) press the button or gives his seal to kill all those people, I want him to think about the consequences and the accountability because already the world is exposed to the fact (of the camps) through this film," Shimizu said.