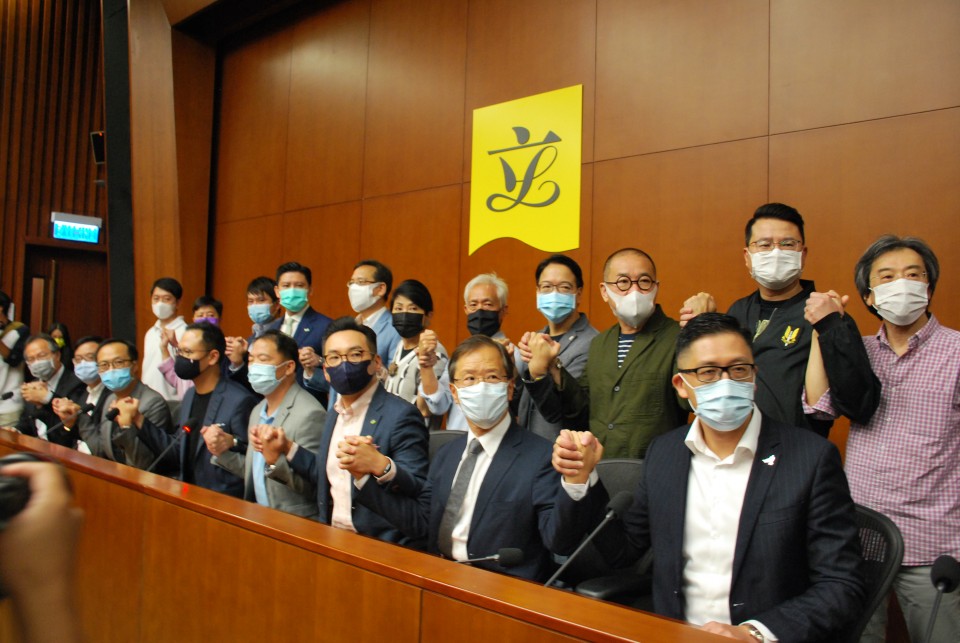 Hong Kong's pro-democracy lawmakers say on Nov. 9, 2020 they will resign en masse if Beijing were to disqualify any of them allegedly for violating the oath of office. (Kyodo)

The Hong Kong government on Wednesday disqualified four opposition lawmakers after Beijing's intervention, prompting 15 others from Hong Kong's pro-democracy camp in the legislature to resign en masse in protest.

The moves came after lawmakers of the Standing Committee of the National People's Congress, China's parliament, adopted a decision earlier in the day on the qualifications for members of Hong Kong's 70-seat Legislative Council.

The four Hong Kong lawmakers are Dennis Kwok, Alvin Yeung and Kwok Ka-ki of the Civic Party and Kenneth Leung, a trade-based "functional constituency" lawmaker from the accounting sector, who were reportedly the target for the disqualification decision.

The four lawmakers are among a dozen candidates from the pro-democracy camp previously barred from running in September's legislative election for their alleged insincere pledge of allegiance.

Hong Kong leader Carrie Lam, who sought the Chinese parliament's decision, said they were judged to have breached their oath by not being truly loyal to Hong Kong and not genuinely upholding the Basic Law, the city's mini-constitution.

The Standing Committee of China's parliament "has made it very clear that the criteria for anyone who has taken an oath and serve as Legislative Council members but thereafter engaged in activities which are breaching those requirements that they should immediately lose their qualifications," Lam told reporters.

She said the Standing Committee, being the ultimate authority, has the power to make legally binding decisions on the Basic Law.

"On issues of legality and constitutionality, obviously from our point of view, this is clearly in breach of the Basic Law and our right to participate in public affairs and also a failure to observe due process," Kwok said after the announcement.

Yeung said the road ahead will be bumpy and difficult, "but I am in full faith of Hong Kong and all Hongkongers for simple reason because we know we have thousands and countless of youths and Hongkongers of all ages who are willing to sacrifice and contribute for Hong Kong."

Wu Chi-wai, Democratic Party chairman, said on behalf of the 15 resigning lawmakers that the decision has rendered the "one country, two systems" framework, under which Hong Kong's autonomy was warranted, officially dead and indicated that separation of powers has been taken away.

"Today we announce our mass resignation," Wu told reporters. "We hope that, although we are facing a large amount of difficulties in the coming future (in) the fight for democracy, we will never, never give up."

Democrat James To said the mass resignation is a protest against the Chinese communist regime disqualifying Hong Kong lawmakers, which is "an arbitrary form of repression by which the Communist Party sought to control everything."

Hong Kong's 70-strong legislature is supposedly run independently of Beijing rule under the "one country, two systems" principle promised to the former British colony when it was returned to China in 1997.

Chief Executive Lam, however, showed little concern over the 19 missing opposition lawmakers, saying that she will be rather "excited" as government bills could be passed swiftly by the pro-establishment camp lawmakers remaining in the legislature.

"I don't believe Hong Kong will have a rubber stamp legislature after the 19 lawmakers left. The pro-establishment camp lawmakers have not been all supportive of the government in the past," she said.

In Beijing, Chinese Foreign Ministry spokesman Wang Wenbin told reporters that the question of membership of Hong Kong lawmakers is "purely China's internal affairs," adding, "Other countries have no right to make irresponsible remarks and intervene."

In late June, the mainland enacted a national security law for Hong Kong to crack down on what it views as secession, subversion, terrorism and collusion with foreign forces, apparently aiming to quell protests against the pro-Beijing government in the territory.

Since then, many Western nations, including the United States and Britain, have been lambasting the sweeping legislation for jeopardizing freedoms and human rights in the special administrative region, where democracy is supposed to be guaranteed.