Hopes are growing in Japan that the country will move toward allowing married couples to use different surnames as Prime Minister Yoshihide Suga recently suggested he remains committed to introducing the option, a departure from current legal requirements.

Japan's Civil Code requires married couples to have the same surname, and conventionally, the burden of altering family names has largely fallen on women. 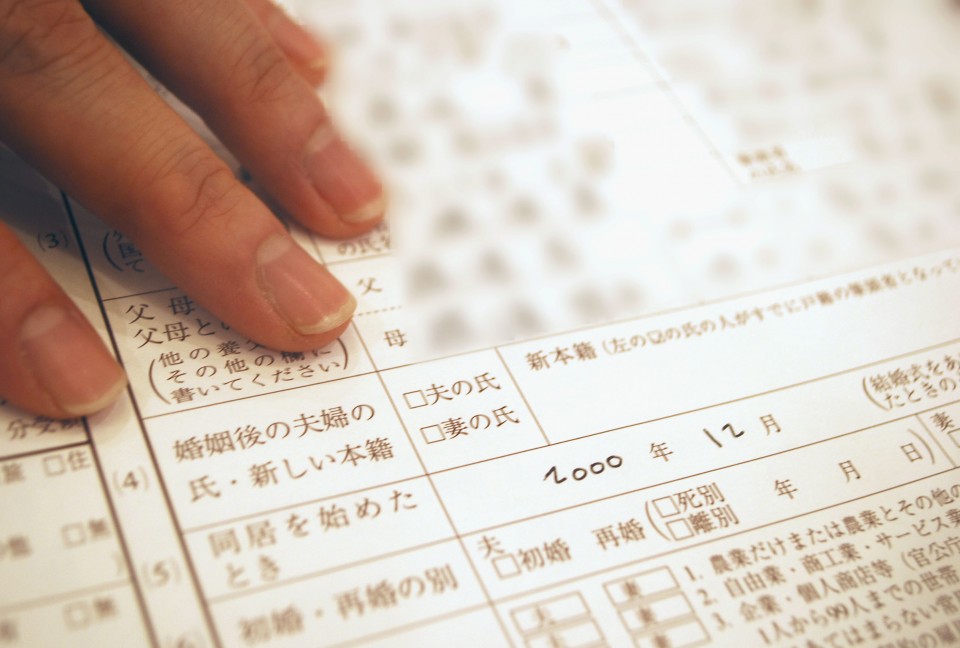 A nurse shows the marriage document she and her common-law husband have mostly filled out but with the surname box left blank, as pictured in Tokyo in August 2020. (Names and other personal information have been pixelated for privacy reasons)(Kyodo)

The U.N. Committee on the Elimination of Discrimination against Women has recommended a revision to the law, saying it is discriminatory toward women, and surveys in recent years have shown many in Japan are in favor of having the option of keeping their surname even after marriage.

When Suga was asked at a parliament committee meeting on Nov. 6 about his past call for creating the option, he said, "As a politician, I bear a responsibility as I have said such things."

The unscripted response suggesting his commitment to work on the issue surprised opposition lawmakers and others.

"No bureaucrat can prepare a script like that. The response was beyond our expectations and reflected the prime minister's thoughts," said a government official.

An online survey in October targeting people under 60 in Japan by Waseda University professor Masayuki Tanamura and a civic group showed 70.6 percent of 7,000 respondents said they did not mind if married couples had different surnames, while 14.4 percent said all couples should have the same family name.

When the government solicited public comments on the surname issue in August and September, it received over 400 comments. None of them were against having the option of separate surnames, while some said they have given up on legal marriage and having children as common-law couples under the current system. 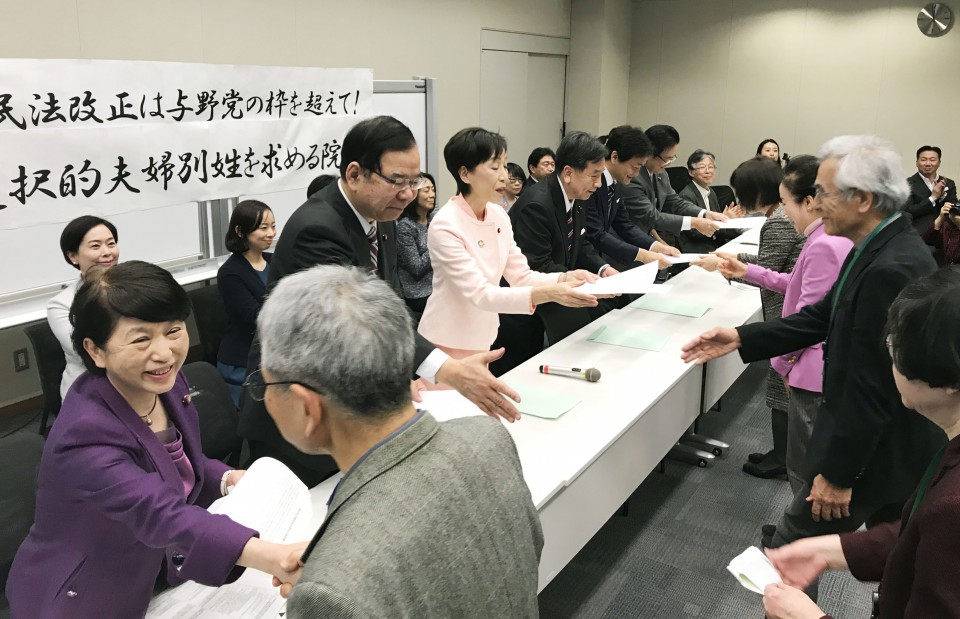 Opposition lawmakers receive a petition from advocates of a dual-surname system on Feb. 27, 2020, in Tokyo. (Kyodo)

Reflecting such opinions, a basic outline for the government's new five-year policy on gender equality reported to Suga earlier this month stated, "Some people say being unable to use the surname they had used before marriage is causing problems in their lives."

While the ruling LDP is known for having many conservative members who adamantly oppose separate surnames as harmful to a family's unity, signs of change are emerging.

The LDP set up a special committee on promoting female empowerment in late October, with a working group dedicated to debating the surname issue.

"The fact that debate on what has long been viewed as taboo has started is the result of people raising their voices," said Naho Ida, a senior official of the civic group that conducted the survey with Tanamura, a professor of family law.

"We want the prime minister to resolve this swiftly as a problem troubling to people," she said.