The United Nations said Saturday that 50 countries have ratified a U.N. treaty banning nuclear weapons, paving the way for its entry into force on Jan. 22, a move praised by anti-nuclear activists but opposed by the United States and other nuclear powers.

The Treaty on the Prohibition of Nuclear Weapons, however, puts on the spot Japan and other countries that shelter under the nuclear umbrella of the United States.

U.N. Secretary General Antonio Guterres commended the 50 countries and saluted "the work of civil society, which has been instrumental in facilitating the negotiation and ratification of the treaty."

Guterres said the treaty's entry into force "is a tribute to the survivors of nuclear explosions and tests," and "represents a meaningful commitment toward the total elimination of nuclear weapons," according to U.N. spokesman Stephane Dujarric.

The pact, which was adopted in 2017, will become the first international norm outlawing the development, testing, possession and use of nuclear weapons. 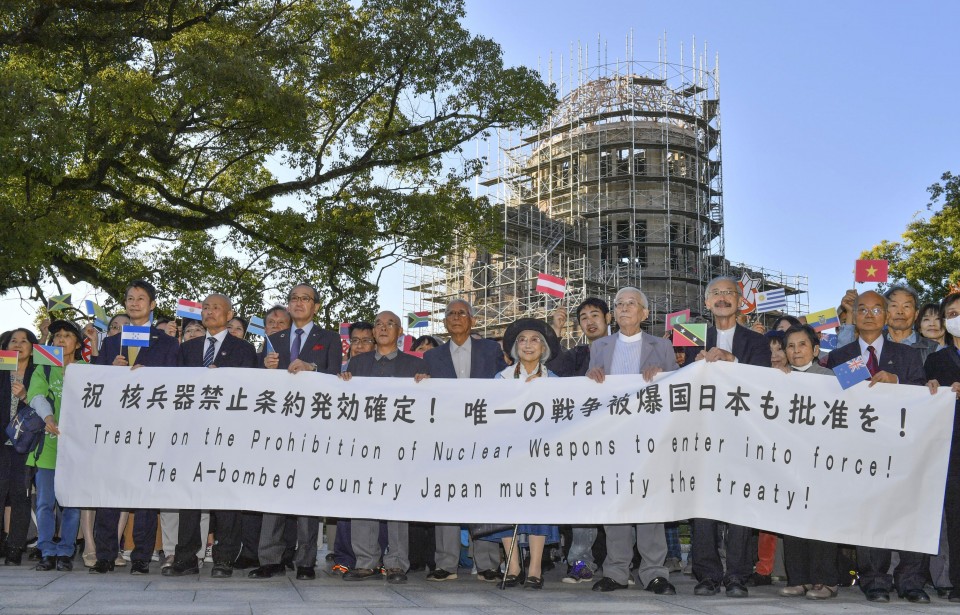 People celebrate in front of the Atomic Bomb Dome in Hiroshima, western Japan, on Oct. 25, 2020, after the ratification of the Treaty on the Prohibition of Nuclear Weapons by 50 countries, paving the way for its entry into force on Jan. 22. (Kyodo) ==Kyodo

It will enter into force 90 days after it has been ratified by at least 50 countries and regions. Honduras was the latest country to complete the ratification procedure.

Despite calls from atomic bomb survivors and anti-nuclear activists for Japan to ratify the treaty, Japanese ruling and opposition party lawmakers expressed mixed feelings over the pact.

"We share the idea (behind the treaty), but we find it very unrealistic" in ridding nuclear states of their arsenals, Masahiko Shibayama, acting secretary general of the governing Liberal Democratic Party, said Sunday on an NHK program in Tokyo.

Tetsuro Fukuyama, secretary general of the main opposition the Constitutional Democratic Party of Japan, said, "It is extremely difficult to keep a balance between how to handle the nuclear umbrella and security in Asia, including the situation in North Korea."

Other opposition parties welcomed developments over the nuclear ban treaty, with the Japanese Communist Party saying it marked a step forward toward the abolition of nuclear weapons.

Nongovernmental organizations hailed the 50th ratification of the treaty, as well.

"With the treaty now ready to enter into force, everything will change, but our work is not done," the International Campaign to Abolish Nuclear Weapons, known as ICAN, said, pledging to "make sure the treaty lives up to its full potential."

Although the treaty will not be able to legally require nuclear power states to abolish their arsenals, the launch of the treaty is likely to spur momentum toward reducing stockpiles.

But some experts have questioned the effectiveness of the treaty as it does not involve any of the five permanent members of the U.N. Security Council -- Britain, China, France, Russia and the United States -- all of which are nuclear power states.

The United States has reportedly pressured some of the signatories as part of its opposition to the pact.

Other nuclear weapon states -- India, Israel, Pakistan and North Korea -- are not party to the treaty, either. 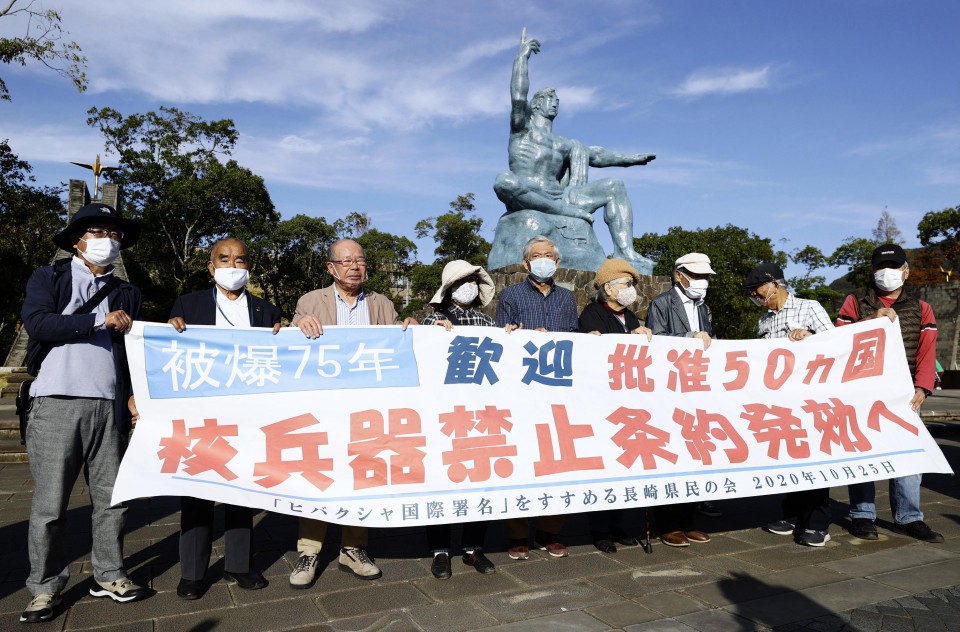 People celebrate in front of the Peace Statue at Peace Park in Nagasaki, southwestern Japan, on Oct. 25, 2020, after the ratification of the Treaty on the Prohibition of Nuclear Weapons by 50 countries, paving the way for its entry into force on Jan. 22. (Kyodo) ==Kyodo

Japan, the only country to have suffered the devastation of atomic bombings, has decided not to sign the treaty in consideration of its security ties with the United States.

Survivors of the U.S. atomic bombings on Hiroshima and Nagasaki along with others are calling for the Japanese government to take the lead in achieving a world free of nuclear weapons.

"I would like Prime Minister Yoshihide Suga to see the reality in a flexible way without doing the same thing as his predecessor," said Thurlow, who survived the 1945 U.S. atomic bombing of Hiroshima at age 13, in an online event.

Toshiyuki Mimaki, acting head of the atomic bomb survivors in Hiroshima, said the ratification by the 50 countries has established a base to press nuclear powers and those under a nuclear umbrella to abolish nuclear weapons.

Speaking at a news conference in the western Japan city, Mimaki, 78, urged the government to ratify the treaty, saying, "Can the (only) atomic-bombed country just stand by and watch developments from the sidelines? I would like the government to change its attitude."

ICAN, the 2017 Nobel Peace Prize laureate, said in a statement, "In countries that have not joined, it is up to us to make sure that companies, governments and people know that nuclear weapons are illegal and that they need to stand on the right side of history."