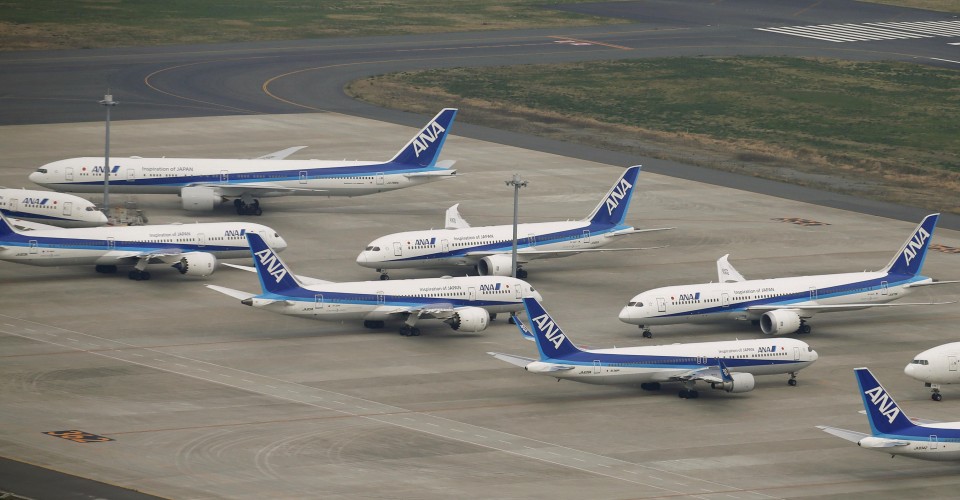 TOKYO - ANA Holdings Inc. is expecting to book a record annual net loss of around 530 billion yen ($5 billion) and shed up to 30 large jets, accounting for about half of the total, as the coronavirus pandemic batters air travel demand, company sources said Wednesday.

The parent of All Nippon Airways Co., which has withheld an earnings estimate for the current business year through March, believes it will take some time for demand, particularly for international flights, to recover due to the pandemic, the sources said.

In the run-up to the Tokyo Olympics, initially scheduled for this summer but postponed for one year due to the pandemic, ANA had pursued an expansionary strategy to accommodate more international passengers.

Also on the back of increased flight slots at Tokyo's Haneda airport, the number of its aircraft stood at 268 as of the end of June, up from 210 in fiscal 2008.

However, ANA is now tilting toward restructuring efforts to turn its business around.

The sources said it has decided to retire about half of its 59 wide-body jets such as the Boeing 777, including those on lease, to cut costs as they are less fuel efficient and require more spending for maintenance compared with smaller aircraft.

The major Japanese airline will book impairment losses in the first half of the current business year through September following devaluation of its aircraft, hitting its bottom line hard, the sources said.

The airline said the number of passengers for its international flights plunged 96 percent in the five months through August from a year earlier after many countries around the world imposed travel restrictions.

Even though the number of domestic flight passengers has been gradually increasing, partly thanks to the government's travel subsidy program, the International Air Transportation Association expects that global air traffic will not return to pre-pandemic levels until 2024.

ANA plans to announce next Tuesday its earnings results for the first half of the current business year and outlook for full-year earnings, as well as its restructuring plan including the planned reduction of large airliners.

The company aims to sell its redundant large jets to aircraft leasing companies, while considering dismantling some of them to sell parts, as well as parking them at places other than airports, the sources said.

On Tuesday, ANA will also unveil a plan to acquire 400 billion yen in subordinated loans from Japanese banks, allowing the company to count part of the debt as capital.

ANA also plans to concentrate international flights departing from and arriving in Japan on Tokyo's Haneda airport once demand recovers, according to the sources.

It has been suspending most of its international services at the country's four major airports -- Narita near Tokyo, Haneda, Chubu in central Japan and Kansai in western Japan.

Meanwhile, it has been in talks with labor unions to cut annual pay for its employees by around 30 percent, while considering selling unused assets and suspending operations on unprofitable flight routes.

ANA logged a net loss of 108.82 billion yen in the April-June quarter.

Japan Airlines Co., another major Japanese carrier, incurred a net loss of 93.71 billion yen in the April-June period and has yet to release an earnings forecast for the current business year to March.

JAL also slashed over 100 aircraft and about 16,000 employees to restore its business when it went bankrupt in 2010.

Virus-hit ANA to acquire 400 bil. yen in loans to bolster capital base