Japan made conciliatory gestures toward North Korea on Monday, proposing the nations overcome their mutual distrust to deepen cooperation, in a bid to solve the issue of Japanese nationals abducted by Pyongyang in the 1970s and 1980s.

While demanding an immediate return of the abductees, a Japanese delegate told a meeting of the U.N. General Assembly Third Committee, which deals with human rights issues, that Tokyo and Pyongyang should contribute to peace in Northeast Asia through their cooperation.

Hiroaki Ichiba, counsellor at Japan's permanent mission to the United Nations, called on North Korea to work with Japan toward a brighter future at the meeting discussing abductions and forced disappearances. 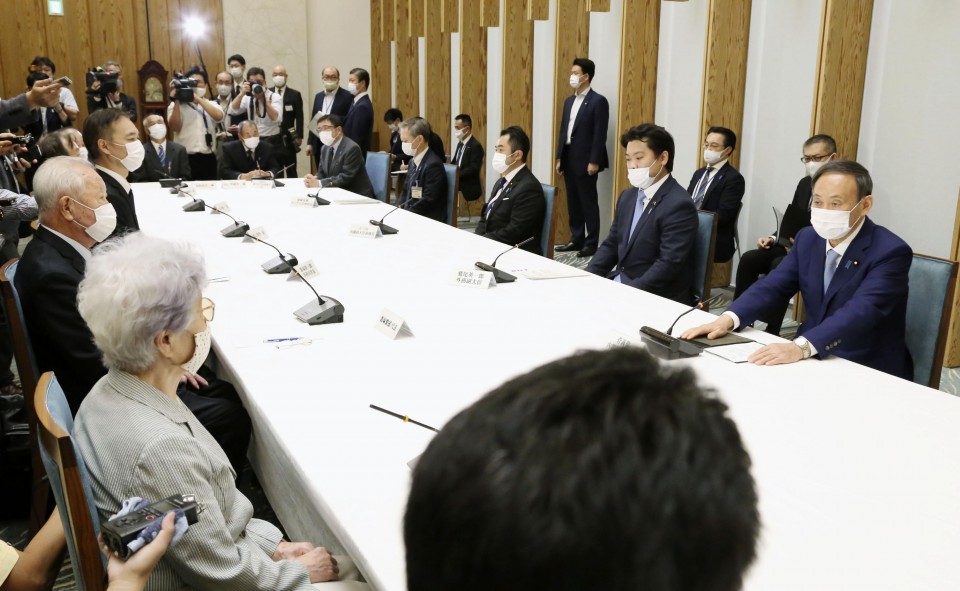 Japanese Prime Minister Yoshihide Suga (far R) meets the families of victims of North Korean abductions, including Sakie Yokota (L, front), whose daughter Megumi was abducted at the age of 13 in 1977, at the prime minister's office in Tokyo on Sept. 29, 2020. (Kyodo)

Referring to the aging families of the victims, Ichiba stressed there is no time to lose and pledged Tokyo will do all it can to bring about a swift resolution to the abduction issue.

The delegate referred to the deaths earlier this year of Kayoko Arimoto, 94, whose 23-year-old daughter Keiko was abducted in 1983 by North Korean agents while she was studying in London, and Shigeru Yokota, 87, whose 13-year-old daughter Megumi was kidnapped in 1977 when she was on her way home from school.

Yokota was a central figure in efforts to bring back the abductees. Both Arimoto and Yokota died without ever again seeing their missing daughters.

Japan officially lists 17 people as having been abducted by North Korea, with five already repatriated in 2002.

Pyongyang maintains that the abduction issue has been resolved, saying eight died, including Yokota, and the other four never entered the country. Tokyo has disputed the claim.

Yokota's wife Sakie and Arimoto's husband Akihiro are only two of the 12 abductees' parents who are still alive.

At the U.N. committee meeting, North Korea reiterated its claim that the abduction issue has already been resolved and said Japan's argument is baseless.

A North Korean representative said the Japanese government is using the issue for political purposes, aiming to divert international attention from its past war crimes.