Daichi Kamada scored his first goal of the German first-division season on Saturday, netting the equalizer in Eintracht Frankfurt's 2-1 comeback win over Hoffenheim.

The Japanese midfielder turned in a pass from Bas Dost in the 54th minute at Deutsche Bank Park and dribbled through three men in the 71st to help set up Dost's late winner. 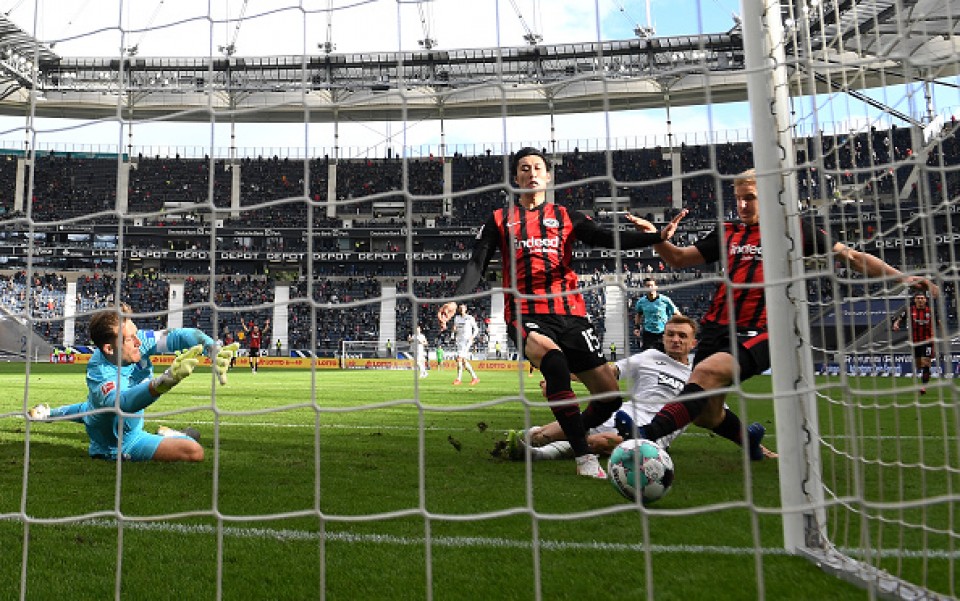 Daichi Kamada of Frankfurt scores his team's first goal past Goalkeeper Oliver Baumann of Hoffenheim during the Bundesliga match between Eintracht Frankfurt and TSG Hoffenheim at Deutsche Bank Park on October 03, 2020 in Frankfurt am Main, Germany. (Getty/Kyodo)

Eintracht now trail RB Leipzig on goal difference at the top of the Bundesliga standings, while Hoffenheim dropped to fifth after suffering their first loss over three fixtures.

"I think this is the best start Eintracht has made in the last few years," Kamada said.

"I didn't score my first goal last season until quite a ways through league matches, but it turned out well today."

Croatia striker Andrej Kramaric got past former Japan captain Makoto Hasebe in the 18th and curled into the top corner to put Hoffenheim in the lead early on with his league-leading sixth goal of the season.

"We seized the initiative throughout the match. It was good we were able to turn it around by the end," said Hasebe, who played a full match for the hosts in central defense.

"Seven points in our first three matches -- it feels like we're making a good start."

In the German second division, Genki Haraguchi contributed an assist and a goal in Hannover's 4-1 win over Eintracht Braunschweig in the Lower Saxony derby.

In the Spanish top flight, Shinji Okazaki injured his left thigh and came off the pitch in the 40th minute of Huesca's scoreless draw at Elche.

As a result, Okazaki will not be able to participate in Japan's friendlies against Cameroon on Oct. 9 and the Ivory Coast on Oct. 13 in the Netherlands, the Japan Football Association said Sunday.

The 34-year-old forward had been set to make his first appearance for the Samurai Blue since the 2019 Copa America tournament in Brazil.