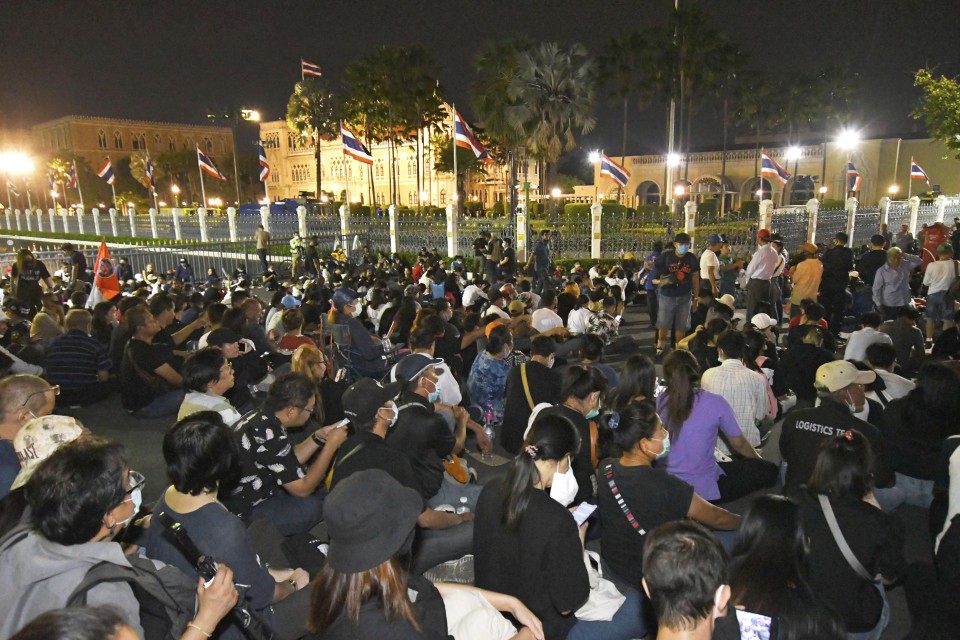 Anti-government protesters rally near Thai Prime Minister Prayut Chan-o-cha's office in Bangkok on Oct. 14, 2020, reiterating their demand for political change and reform of the monarchy. (Kyodo)

BANGKOK - A state of emergency was imposed in Thailand's capital Bangkok early Thursday to rein in protests around government headquarters, but thousands of demonstrators still took to the streets in the afternoon and into the evening.

The protesters rallying at Ratchaprasong intersection in defiance of the gathering ban raised the three-finger salute against dictatorship and chanted "release our friends!" -- referring to the dozens of protest leaders arrested since Tuesday.

They also called for Prime Minister Prayut Chan-o-cha's resignation and demanded he revoke the "illegitimate" citywide state of emergency.

Small scuffles between protesters and police were seen, but there were no immediate reports of injuries.

The protesters began gathering there in the late afternoon after police overnight cleared their camp at Government House, which houses the prime minister's office.

Other protests took place Thursday on a smaller scale at some universities in Bangkok.

In announcing the measure, Prayut called the protests illegal and said they hinder efforts to stem the spread of the coronavirus, necessitating his declaration of a "severe" emergency to prevent a more serious turn of events.

The premier also referred to the protest's potential impact on the country's fragile economy.

"It is extremely necessary to introduce an urgent measure to end this situation effectively and promptly," he said.

The decree bans gatherings of five or more people and the publication of news or online messages that could harm national security, stoke fear or intentionally distort information.

The government said it resorted to the measure partly as some of the demonstrators, who are also calling for reforms of the monarchy, obstructed a royal motorcade during Wednesday's protest.

On Wednesday, the protesters marched to Government House and filled the streets around it. Many of them left before midnight as police warned they would otherwise be removed by force, but some camped out overnight outside the complex.

Since Tuesday, about 43 protest leaders have been arrested, while two other activists are being sought by police for obstructing Queen Suthida's motorcade.