Japanese Prime Minister Yoshihide Suga arrived in Hanoi on Sunday on the first leg of a four-day trip to Vietnam and Indonesia in his first foreign travel since taking office, as he looks to bolster ties with Southeast Asian countries. 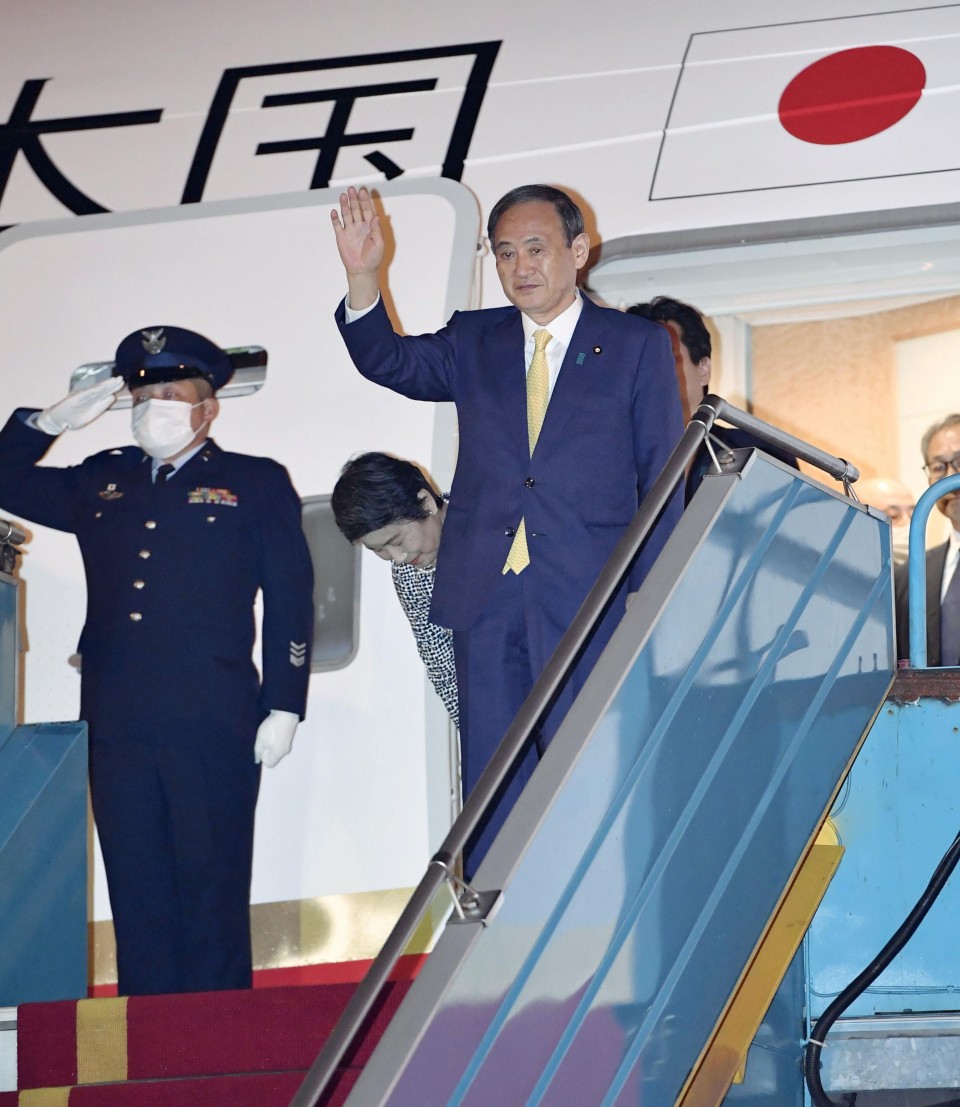 In separate meetings with Vietnamese Prime Minister Nguyen Xuan Phuc and Indonesian President Joko Widodo, Suga is expected to promote efforts to achieve a "free and open Indo-Pacific" as well as discuss economic cooperation amid the COVID-19 crisis.

The visit comes as China's growing maritime assertiveness is prompting Japan to seek support from like-minded countries in Southeast Asia. Vietnam is one of the claimants in territorial disputes in the South China Sea, while Indonesia's exclusive economic zone overlaps with China's nine-dash line.

"I would like to show a resolve to contribute to peace and prosperity in the region toward realizing a free and open Indo-Pacific," Suga told reporters before leaving Haneda airport in Tokyo.

Suga and Phuc, slated to meet Monday in Hanoi, are expected to agree to facilitate the cross-border flow of medical equipment and other goods as Japan looks to diversify its supply chain in light of the pandemic, according to Foreign Ministry officials.

The countries are close to reaching a military agreement enabling Japan to export defense equipment and technology to Vietnam, including patrol planes and radar that would help improve its surveillance capabilities, and the pact could be signed during the trip.

Suga, who became prime minister on Sept. 16 after his predecessor Shinzo Abe stepped down for health reasons, will also make a policy speech at Vietnam Japan University, which opened in 2016 with funding from both countries.

After flying to Jakarta on Tuesday, Suga will meet with Joko to discuss restarting travel between Japan and Indonesia that has virtually stopped due to the COVID-19 crisis, as well as cooperation in development of infrastructure such as railways and ports.

They will also affirm plans to hold a so-called "two-plus-two" meeting between their foreign and defense ministers at an early date to strengthen security cooperation, the officials said.

The prime minister will be traveling with a smaller entourage than usual in order to reduce the risk of spreading the novel coronavirus.

All of them will take polymerase chain reaction tests before departing and upon returning to Japan on Wednesday evening, but Suga and some members of his group will be exempt from tests during the journey, the officials said.