Travel restrictions between Australia and New Zealand will begin to ease in mid-October as both nations see a continued decline in community transmission of coronavirus, Australia's deputy prime minister said Friday.

In the first stage of resumed travel from Oct. 16, New Zealand residents who have not been in a designated COVID-19 hotspot for the previous 14 days will be allowed to fly into parts of Australia without undergoing self-isolation. 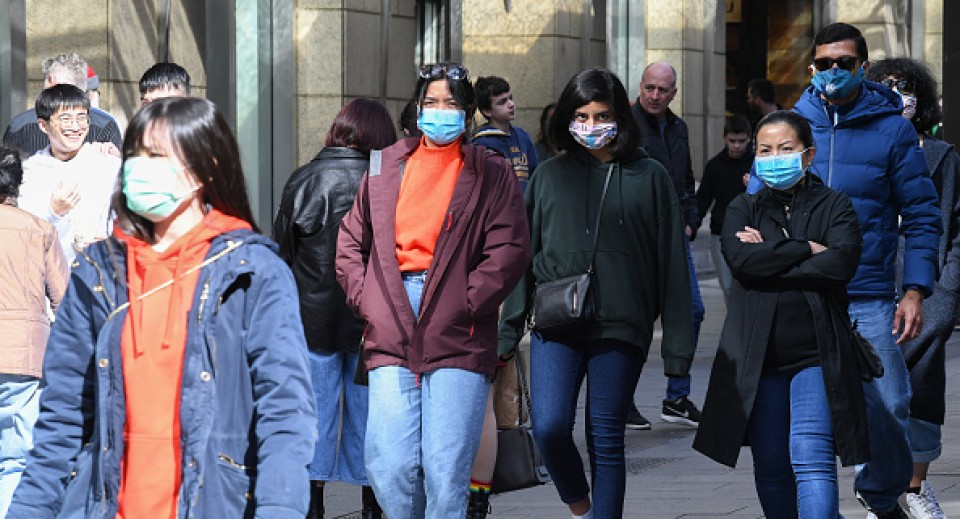 People wearing face masks walk on a street in the CBD on August 22, 2020 in Sydney, Australia. (Getty/Kyodo)

The Australian government defines a hotspot using a three-day rolling average of three locally acquired cases per day, and said in a statement that there are currently no such hotspots in New Zealand.

Deputy Prime Minister Michael McCormack said for one to travel to New South Wales and the Northern Territory, their area of origin must have "three days with less than three cases" of infection to be deemed safe.

So far, no arrangements have been made for Australian residents to travel to New Zealand. However, McCormack said he hopes the program will expand.

"This is the first stage in what we hope to see as a trans-Tasman bubble between the two countries, not just that state and that territory," he said, referring to the Tasman Sea, which separates the two countries.

New Zealand Prime Minister Jacinda Ardern, for her part, remains steadfast that her country's borders will remain closed and warned Friday that any travelers to Australia will have to self-isolate upon their return, according to Radio New Zealand.

In March, both nations closed their borders to almost all international arrivals in an attempt to limit the spread of the disease caused by the new virus.

A quarantine-free travel zone between Australia and New Zealand was initially floated in May. But, a second wave of cases in both countries, including a monthslong lockdown of Australia's second-most populous city, Melbourne, put those plans on hold.

McCormack said the state of South Australia is understood to be the third Australian jurisdiction to open its borders to New Zealand arrivals.