A four-day festival started Saturday at Shuri Castle, a symbol of the southern island prefecture of Okinawa, as the castle marked the first anniversary of a massive fire with many voicing hope for the early restoration of the gutted buildings.

The castle and the underground ruins of its original structure, which was listed as a UNESCO World Heritage site in 2000, were engulfed by a fire, believed caused by an electrical fault, during the same festival last year when six wooden buildings occupying over 4,000 square meters were destroyed. 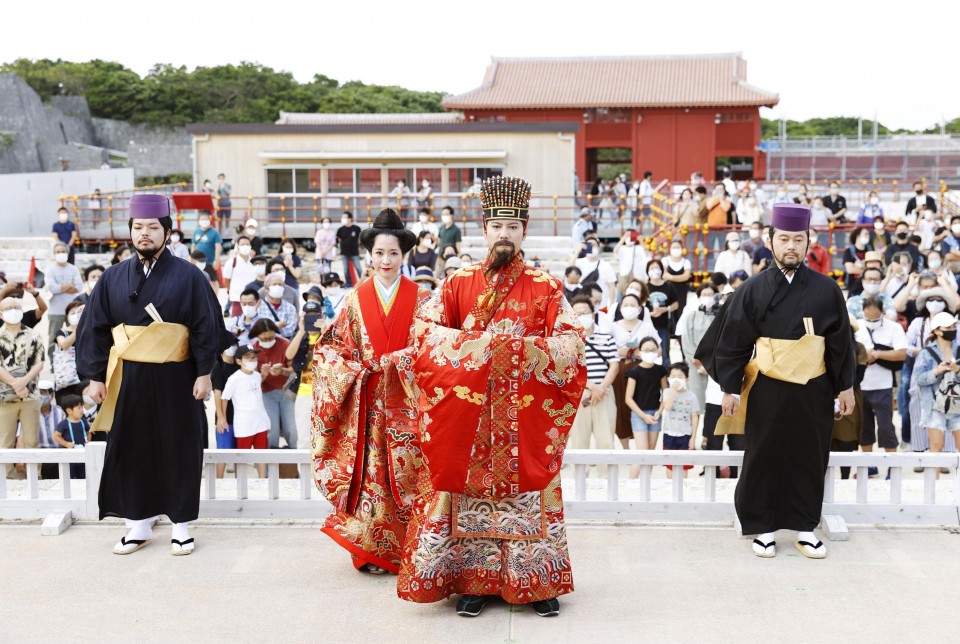 Locals dressed as the indigenous king and queen at Shuri Castle in Okinawa on Oct. 31, 2020. (Kyodo)

"I feel sad now that I see (the castle) is really lost," said Reiko Kinjo, a 47-year old local resident, who visited the site with her family for the first time since the fire, adding she hopes such a disaster will never be repeated.

Kotaro Hidaka, a 42-year-old visitor from Osaka, said he will do whatever he can "such as make a donation" to help complete the reconstruction work.

The festival started with traditional music. On Tuesday, it will end with a parade by locals dressed as the indigenous king and queen and their entourage.

The Japanese government said in March that it aims to restore the gutted buildings by 2026 after embarking on full-fledged reconstruction in 2022.

The original Shuri Castle dates back to the 14th century and housed the monarchs of the Ryukyu Kingdom, which spanned 450 years before Okinawa was annexed by Japan in 1879.

The castle has burned down several times including during World War II.