ANA Holdings Inc. said Tuesday it is expecting a record net loss of 510 billion yen ($4.9 billion) in the current business year through March due to depressed air travel demand amid the coronavirus pandemic, prompting the major Japanese airline to take restructuring steps to become leaner and launch new businesses.

ANA, the parent company of All Nippon Airways Co., also said it agreed with major Japanese banks Tuesday on subordinated loans totaling 400 billion yen to bolster its financial base in the face of an uncertain industry outlook.

ANA will cut more jets than planned to reduce fixed costs, aiming for a swift turnaround from an operating loss of 505 billion yen and a 62.5 percent drop in sales to 740 billion yen projected for the year to March to return to the black in the next business year.

"The outlook for the current year is very severe," ANA President and CEO Shinya Katanozaka said during a press briefing. "We will return to profitability by taking every possible step in the next business year," including the launch of a new low-cost carrier service focused on the growing Asian market. 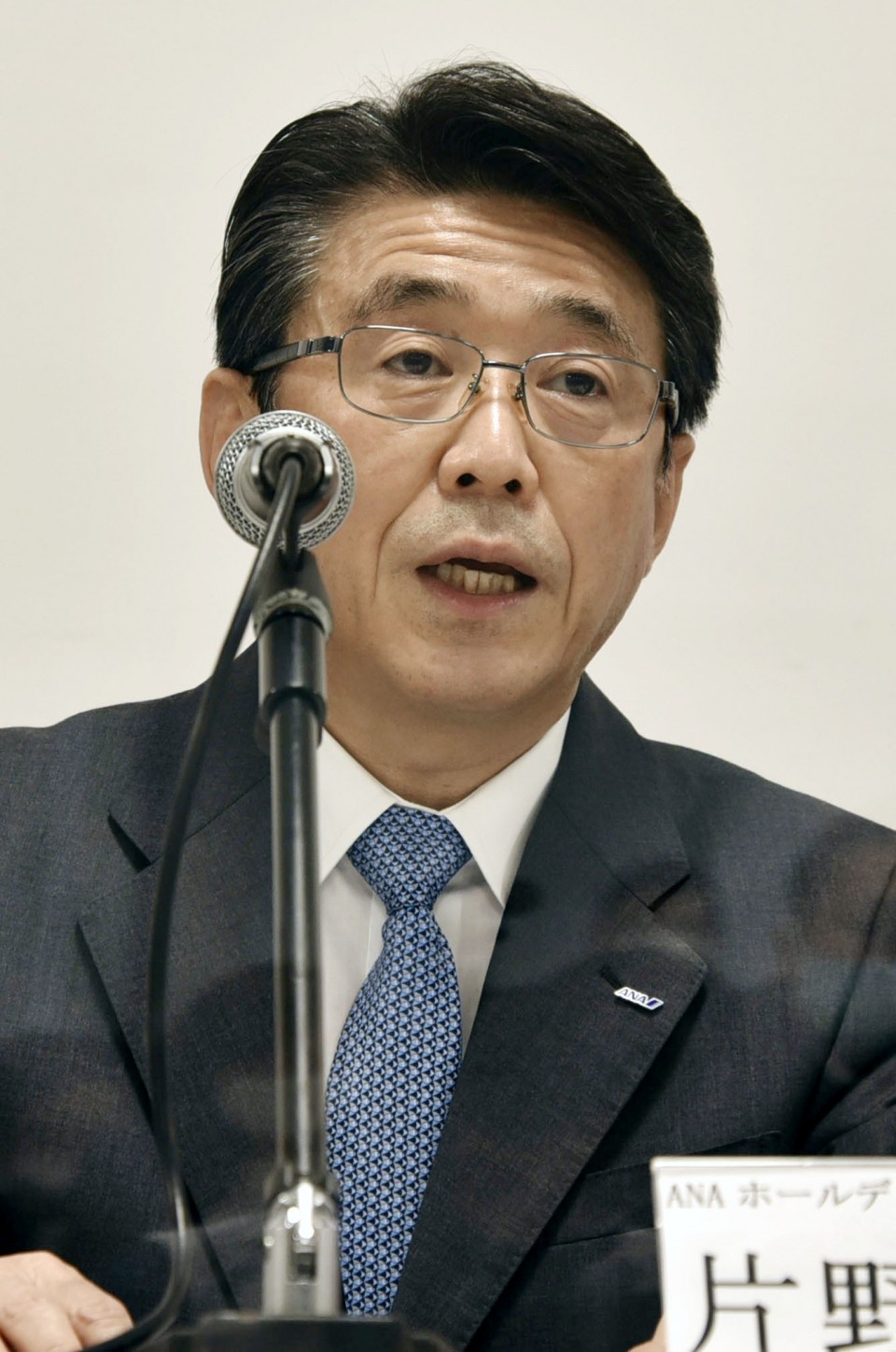 Shinya Katanozaka, president and CEO of ANA Holdings Inc., speaks at a press conference in Tokyo on Oct. 27, 2020, about the All Nippon Airways group's half-year earnings results and full-year estimates amid the coronavirus pandemic. (Kyodo) ==Kyodo

In the six months through September, ANA logged a net loss of 188.48 billion yen as total revenue sank 72.4 percent from a year earlier to 291.83 billion yen. It reported an operating loss of 280.95 billion yen.

Revenue from international flights plunged 94.2 percent from a year earlier to 19.6 billion yen as many countries maintained travel restrictions due to the pandemic. Sales from domestic flights sank 78.6 percent to 78.9 billion yen.

Demand for domestic flights is expected to recover to 70 percent of pre-pandemic levels and that for international services to 50 percent by the end of the current business year, according to Katanozaka, who said further cost cuts will be necessary if the situation worsens.

The estimated full-year net loss is far larger than the 57.39 billion yen of red ink it reported in the year to March 2011, following the global economic downturn.

Katanozaka said ANA has ample cash on hand and he is not worried about its cash position. Part of the subordinated loans from the Development Bank of Japan, Mizuho Bank, MUFG Bank and Sumitomo Mitsui Banking Corp. can count as ANA's capital, helping to maintain its credit standing and prevent future borrowing costs from rising.

ANA will cut 33 more airplanes than initially planned, targeting Boeing 777s used for long-range flights, bringing the total number of aircraft to 276 at the end of March.

The airline said it plans for more than 400 workers to temporarily work at companies outside of the group. It has already started offering early retirement with increased benefits and proposed pay cuts to its labor unions.

ANA is not alone in burning through cash as major airlines, including rival Japan Airlines Co., have also been hit hard by a sharp drop in international passengers.

Prospects appear slim for a swift recovery in international air travel, a critical revenue source for ANA, as key markets such as Europe and the United States are still struggling to contain the spread of COVID-19, the respiratory disease caused by the novel coronavirus.

The outlook for domestic routes may be less pessimistic as the Japanese government is seeking to allow more economic activity while preventing a surge in coronavirus cases. A government subsidy program to revive domestic tourism was launched in July, offering a ray of hope for ANA.