Hong Kong police cracked down on protesters attempting to stage a march on China's National Day Thursday to carry on the anti-government movement, with dozens of arrests.

According to the police, more than 60 people were arrested for taking part in unauthorized assemblies and other offenses. 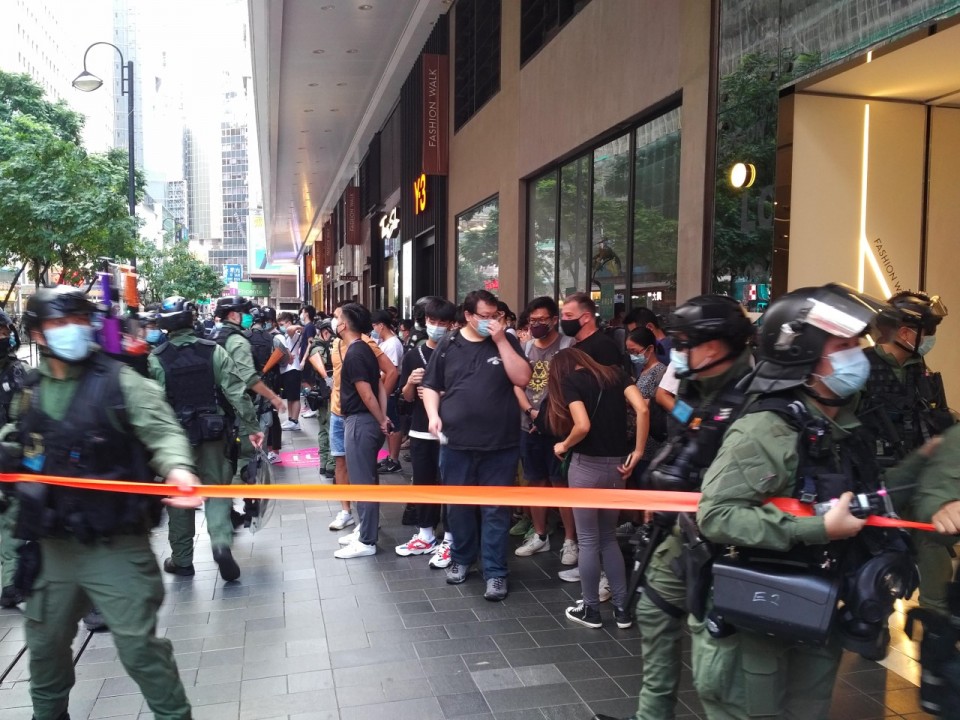 People scattered on streets in the populous shopping district of Causeway Bay on Hong Kong Island were swiftly dispersed by riot police whenever crowds started gathering.

"Hong Kong people know that China will swallow up Hong Kong in 2047, but now it is only 2020, we should still have some 20 years of freedom and this is what we fight for," a 60-year-old health product saleswoman identified herself by surname Man said.

She was alluding to Beijing's promise in the Sino-British Joint Declaration of 1984, which laid out the terms for Hong Kong's handover in 1997, that the city would enjoy a high degree of autonomy for 50 years.

"The government doesn't listen even when millions of people took to the street. Are all these people wrong? If Beijing doesn't budge to pressure by foreign countries (and make concessions), this is the end of Hong Kong," she said, referring to the million people marches that kick-started the anti-government movement last year.

Instead of taking reconciliatory measures toward the lingering and sometimes violent protests, Beijing imposed a sweeping anti-subversive law in the territory in June to crack down on what it calls the Hong Kong version of a color revolution initiated by foreign forces.

Foreign countries including Australia, Britain and Canada have opposed to the national security law and suspended extradition arrangement with Hong Kong. The United States took it a step further by slapping sanctions on Hong Kong and Chinese officials deemed accountable undermining Hong Kong's autonomy and restricting the freedom of expression or assembly of its citizens.

Government leader Carrie Lam, one of the sanctioned officials who is barred from entering the United States and has her U.S.-related assets put under scrutiny, pledged her loyalty to Beijing in her celebratory speech Thursday and dismissed the sanctions.

"Over the past three months, the plain truth is, and it is obvious to see, that stability has been restored to society, while national security has been safeguarded," Lam said during the National Day reception.

"No matter how severe some foreign governments, holding 'double-standards,' are going to level unjustified accusations against the authorities in charge of implementing the National Security Law, or aggressively imposing the so-called sanctions...I and my relevant colleagues will continue to discharge our duty to safeguard national security in accordance with the law without fear or anxiety," she said.