Japan will not join a U.N. treaty banning nuclear weapons, the government's top spokesman said Monday, a stance that puts it in lockstep with the United States but could be seen as contradicting its anti-nuclear credo.

"We believe, given the increasingly difficult security environment surrounding Japan, it is appropriate to make steady and realistic progress toward nuclear disarmament while maintaining and strengthening our deterrence capabilities to deal with threats," Chief Cabinet Secretary Katsunobu Kato said at a press conference.

"Japan shares the goal of this treaty, the abolition of nuclear weapons...but as we differ in how to approach the issue, we will not become a signatory," he said, referring to the treaty that is set to take effect on Jan. 22. 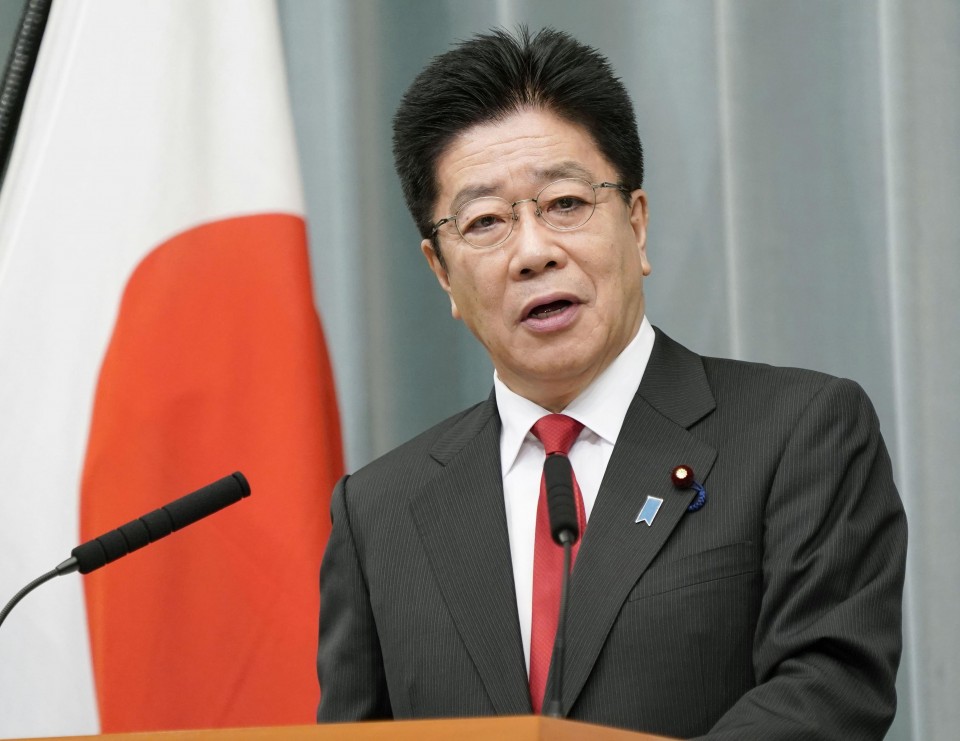 As the only country to have suffered a nuclear attack, Japan has sought to paint itself as a leader in international efforts for nuclear disarmament and nonproliferation.

But Japan also depends on the U.S. nuclear umbrella to protect it from threats including North Korean missiles, preventing it from endorsing an all-out ban on the production, use and stockpiling of nuclear weapons.

Honduras on Saturday became the 50th country or region to ratify the Treaty on the Prohibition of Nuclear Weapons, clearing the way for its entry into force 90 days later. No nuclear powers have joined.

Asked if Japan would be willing to participate as an observer, Kato stressed the need for "careful consideration based on Japan's position."

Former Foreign Minister Fumio Kishida, a member of the ruling Liberal Democratic Party, said the treaty will be a "meaningful" step in realizing a world without nuclear weapons.

"As the only country to suffer atomic bombings in war, we have to think how we can serve as a bridge for nuclear powers to sit at the negotiating table," said Kishida, who served as foreign minister when the accord was adopted by the United Nations in 2017.

Survivors of the August 1945 U.S. atomic bombings of Hiroshima and Nagasaki, which together killed an estimated 214,000 people by the end of that year, and other anti-nuclear activists have urged the administration of Prime Minister Yoshihide Suga to sign up to the landmark treaty.

In a press conference in Tokyo, Sueichi Kido, secretary general of the Japan Confederation of A- and H-bomb Sufferers Organizations, criticized the Japanese government for not taking part in the pact.

"The Japanese government, which should have been the first to ratify the treaty, has turned its back on it," Kido said.

"Japan's nuclear policy needs to change, and the (Japanese) people are the ones who need to initiate it. I believe now is the chance," the 80-year-old said.

In Nagasaki, a digital clock erected in front of the city hall on Monday began the countdown to the treaty's entry into force.

"There is only one path Nagasaki is pursuing, and that is the one that leads to realizing a world without nuclear weapons," Mayor Tomihisa Taue said at an unveiling ceremony.

Around 50 activists marched through central Hiroshima carrying large banners and signs calling for Japan to join the treaty, which was adopted in July 2017 with the support of 122 countries and regions.

Kunihiko Sakuma, the head of a group supporting survivors and himself an A-bomb victim, said he was confident the world was moving toward abolishing nuclear weapons.