The Japanese Olympic Committee will move to protect female athletes from having nonconsensual photographs of a sexual nature snapped while they compete, an important step forward for the country as it seeks to create solidarity with and among victims of sexual abuse.

Sources close to the matter said Monday victims have complained to the JOC after they have discovered photos of themselves shared on social media with sexually explicit captions, leading to the national governing body planning to conduct hearings with various sports bodies. 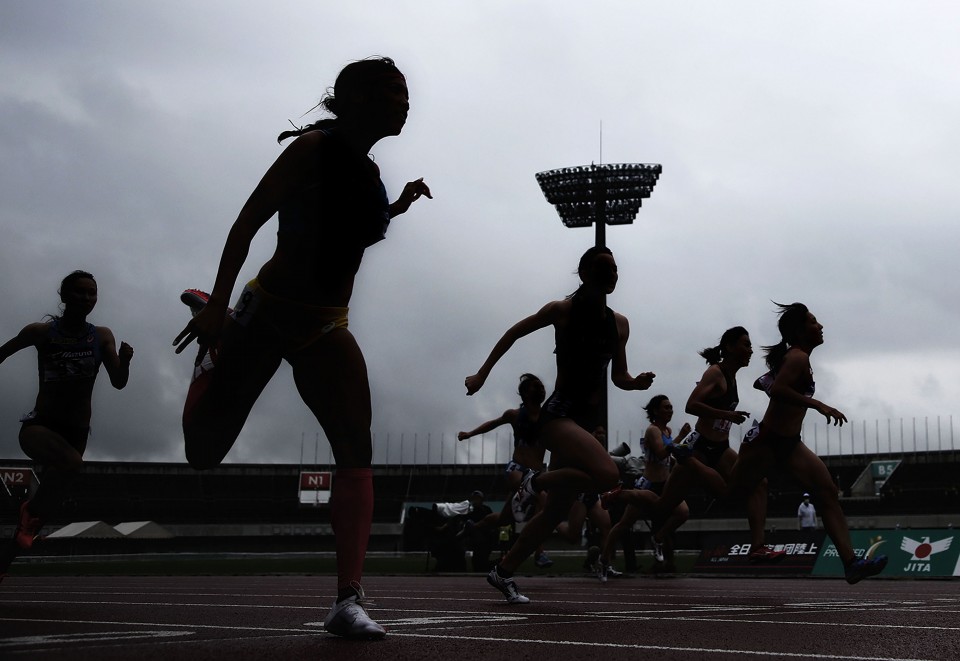 Female runners compete during an athletics meet in Kumagaya, Saitama Prefecture, in September 2020. (Photo has been processed to protect athletes' privacy)(Photo use permitted only for the story concerned)(Kyodo)

The JOC is preparing to issue a joint statement with the Japan Sport Association and All Japan High School Athletic Federation and taking concrete steps to prevent surreptitious photos from being taken and shared, the sources said.

In August, former national team athletes complained to the Japan Association of Athletics Federations that photos zoomed in on their breasts and buttocks were taken during competition.

Social movements like #MeToo and Japan's Flower Demo have highlighted abuse against women in recent years and empowered them to step from the shadows to report sexual harassment, and more Japanese pro athletes have since come forward to talk about their experiences.

One female track and field athlete said she received an unsolicited photo of a man's genitals sent from an unknown Twitter account and another image of herself during competition photoshopped into an explicit sexual situation.

Others said they are easily targeted when they position themselves in jumping events or when they lift their hips into the air on the starting blocks before a sprint.

"Right now there are no spectators in the stands most of the time (because of coronavirus restrictions) so I won't hear cheering but I can focus because I don't have to worry about being secretly photographed," said one athlete.

Athletics officials say pro athletes are not the only ones targeted, as demonstrated by a case last year that became a police matter when a guardian noticed a man taking photos of a child surreptitiously from the stands at a national-level meet outside of Tokyo.

Female athletes compete in Yokohama in May 2019. (Photo use permitted only for the story concerned)(Kyodo)

Ten men were taken to the police station after the incident, but a few returned to the track the next day because the preexisting law provides no penalty for such voyeuristic-style photography unless it involves distributing nude, sexual, or pornographic images without consent.

The Justice Ministry is currently considering revisions on penal regulations on sexual offenses, with controversy over whether the law will recognize capturing nonconsensual images or video as an invasion of privacy.

A case involving a female athlete was reported during a review meeting in September.

"Is there anything that can be done legally about this problem that brings sport into disrepute?" JAAF General Secretary Akira Kazama asked. "The athletics world has suffered from this incessant problem for years but this is a step (toward the solution)."

There is no law against nonconsensual filming and photographing in Japan, and such acts -- secretly filming nudity, sexual situations, or up women's skirts -- are punished only under nuisance-prevention ordinances set by each prefectural government.

It is difficult to charge offenders who take clothed photos of athletes without their consent if there is no criminal punishment available.

"Once the image goes online it will be there forever, even after I retire," said a track and field athlete who has fallen prey to surreptitious photographing.

Lawyer Yoji Kudo, a member of the JAAF legal committee, said spreading sexually explicit content with an athlete as its subject could be classified as either criminal defamation or slander.

"Considering that breaches in privacy caused by social networking services are getting more serious, we've reached an era where we need new laws and tougher penalties," he said.

Another lawyer who supports sexual assault victims, Sakura Kamitani, says the biggest problem is that there is no law in Japan against surreptitious photography.

"The professions of victims range widely from sports to airlines...With unlimited possibilities on the internet, it's hard to control cybercrime. Social media operators should act aggressively and take the lead," she said.

"It's possible for athletes who come (to Japan) for the Tokyo Olympics to become victims so it needs to be dealt with urgently."