Football: Shinji Kagawa undecided on next move after Zaragoza departure

Shinji Kagawa is still considering his next step after parting ways with Real Zaragoza, the former Japan midfielder said Saturday.

In an online press conference, Kagawa said he had hoped to stay with the Spanish second-division club, who a day earlier announced a "mutual agreement" to terminate the remainder of the 31-year-old's contract.

"To be honest, it's not what I wanted. I really regret having to leave unexpectedly," Kagawa said. 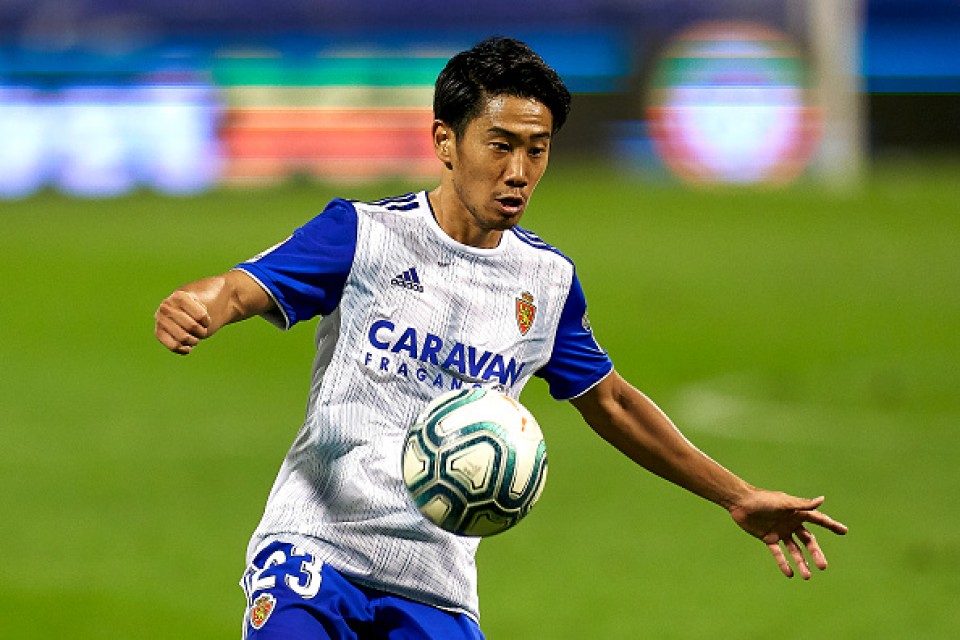 Shinji Kagawa of Real Zaragoza with the ball during the La Liga Smartbank Playoffs match between Real Zaragoza and Elche CF at La Romareda on August 16, 2020 in Zaragoza, Spain. (Quality Sport Images/Getty/Kyodo)

Kagawa signed a two-year contract with Zaragoza last summer after winning two Bundesliga championships over a six-and-a-half-year stretch with Borussia Dortmund, punctuated by a brief spell with Manchester United.

Arriving in Spain following a loan stint with Turkish side Besiktas, Kagawa finished with four goals and one assist in 31 league appearances last season. But a lack of effectiveness due to injuries may have swayed Zaragoza, who missed promotion to La Liga, not to continue using one of their two slots for foreign players on him.

Kagawa said he was in the process of deciding his future. Local media have reported he hopes to stay in Spain, with second-division Sabadell said to be interested.

"From here, I have to think about it. I am at the stage of organizing my future," Kagawa said.

In a press release, Zaragoza thanked Kagawa for his contribution to the club.

"The club wishes to express thanks for the professionalism shown by the player during the time that he has worn the Zaragoza shirt, while wishing him future professional success," the statement said.

Kagawa, who last played for Japan in March 2019, scored 31 goals in 97 appearances for the national side and was instrumental in the Samurai Blue's run to the last 16 at the 2018 World Cup in Russia.