Prime Minister Yoshihide Suga will reiterate his resolve to hold the Tokyo Olympics and Paralympics next summer despite the coronavirus pandemic when he delivers his policy speech in the upcoming extraordinary Diet session, government sources said Wednesday.

Suga, who returned from Vietnam and Indonesia on Thursday -- his first foreign trip since becoming prime minister last month -- is also expected to put an emphasis on his reform plans in the speech, to be delivered at the Diet session on Monday. 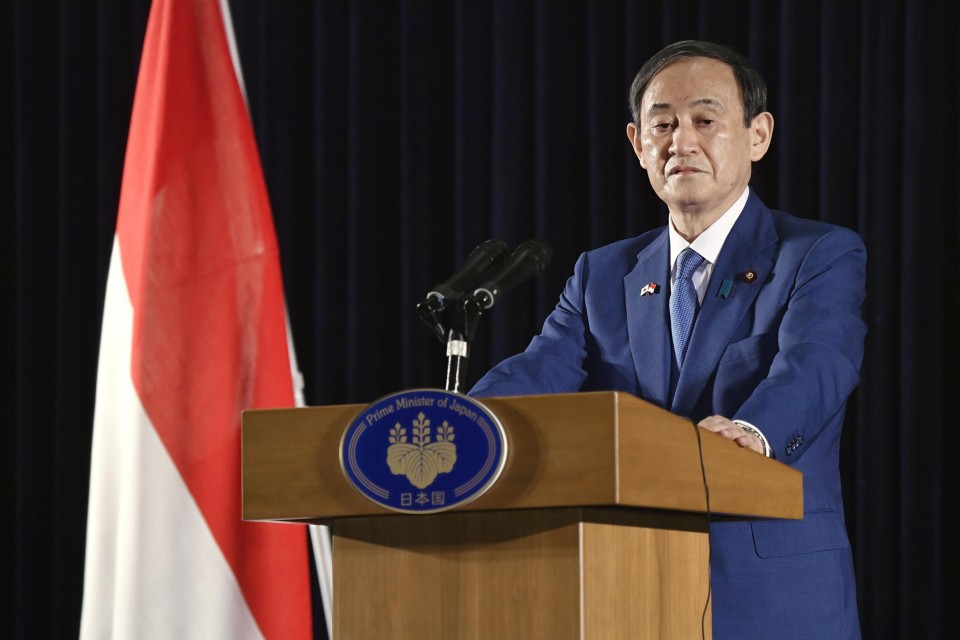 Japanese Prime Minister Yoshihide Suga attends a press conference at a Jakarta hotel on Oct. 21, 2020, during a four-day trip to Vietnam and Indonesia, his first foreign trip since taking office the previous month. (Kyodo)

The draft speech, still subject to change, shows Suga plans to say, "I am determined to host the games as proof that humanity has defeated the pandemic."

Suga is also expected to talk about his plan to lower mobile phone bills, in line with his pledge to form a "Cabinet that works for the people," according to the sources.

While the prime minister is expected to face grilling by opposition parties during the session through Dec. 5 on his recent rejection of scholars who have opposed some government policies as members of the Science Council of Japan, he is unlikely to refer to the issue in his speech.

A source at the prime minister's office said Suga will not touch on the controversy as the government plans to hold talks with Takaaki Kajita, president of the council, on how best to run the advisory body.

The council is currently under the jurisdiction of the prime minister but operates independently to make policy recommendations.

Suga will also talk about realizing public health coverage for fertility treatment and making online medical examinations a permanent system, according to the government sources.

Among other topics he will mention is the prevention of an explosive spread of the novel coronavirus while balancing preventive measures and social and economic activities.

Suga will also likely stress the importance of deepening multilateral cooperation and helping developing countries in the health field.

He will reiterate that the Japan-U.S. alliance is the cornerstone of Tokyo's foreign policy and will call for facilitating debate on amending the country's Constitution, the sources said.