Jobs in nursing care are gaining allure as insurance for people in Japan amid worsening prospects in a labor market ravaged by the novel coronavirus pandemic.

The nursing care industry, meanwhile, is hoping the trend will help it cope with one of the worst labor crunches affecting any sector of the Japanese economy, with more than four times as many jobs available as seekers. 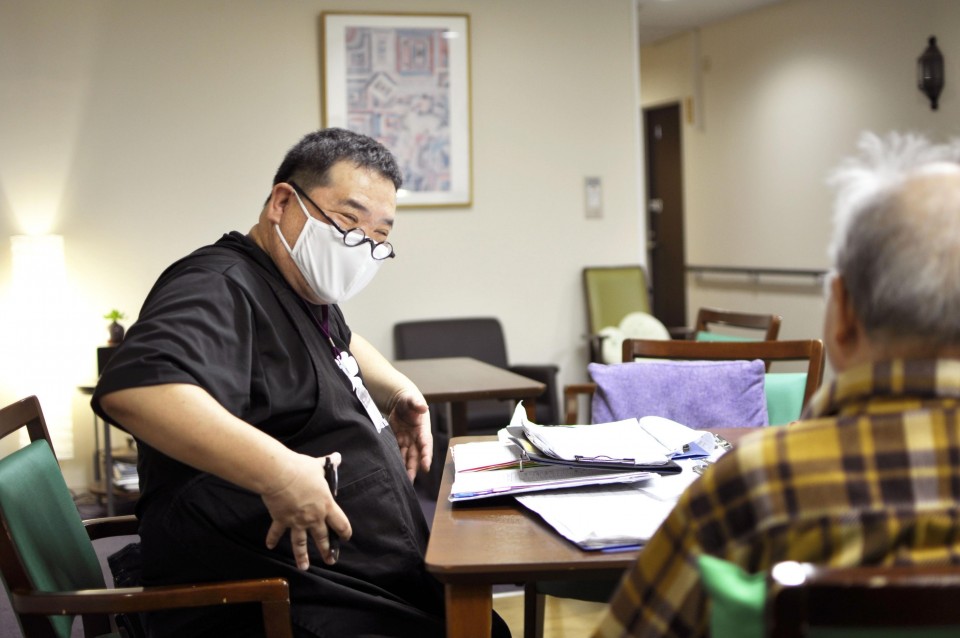 But difficult challenges, such as retaining workers and improving their treatment, lie ahead, especially once the pandemic subsides.

Shigeho Iwabuchi, 55, who until recently worked as a professional clown, took up a job at a fee-charging nursing home for the aged in Fujisawa, Kanagawa Prefecture, near Tokyo, in April.

Iwabuchi turned pro at 25 and had since performed at various events in Japan and abroad.

But with the spread of the virus, performing opportunities dried up, prompting him to take the plunge to find employment through a friend in a nursing care job for which he had no prior experience.

Viewed from the entertainment world, nursing care is considered the "ultimate backstage business," Iwabuchi said. But he now recognizes that the service is "extremely important," adding that it has helped him grow on a personal level. Working all day long is tough on him mentally, he said.

However, Iwabuchi, a part-timer without any official qualification as a nursing care worker, is unlikely to get a pay raise anytime soon. "I cannot continue working here at the current wage level," he said.

With calls for his clown gigs increasing recently, Iwabuchi is struggling to manage both jobs.

In the nursing care sector, the ratio of job offers to seekers stood at 4.20 -- 420 job offers for every 100 job seekers -- in 2019, much higher than the all-industry average of 1.45, according to the Ministry of Health, Labor and Welfare.

Shinko Fukushikai, a social welfare corporation managing the Fujisawa home for the aged, hires workers who have lost jobs because of the pandemic on a short-term basis and accepts those loaned out from non-care companies cutting back on operations.

The need by Shinko and others in the industry for workers has increased in line with the adoption of infection prevention measures and other programs, which create a heavier workload.

As temporary workers can stay on the job if they wish, three loaned workers have become full-time employees of Shinko. The practice "prevents workers from quitting due to job mismatch because they join us after experiencing our work," said Erina Kanzato, in charge of improving service quality.

Tsme, an Osaka-based company that trains qualified nursing care professionals, has seen an increase in applications since March for entry-level seminars necessary for services such as nursing care bathing assistance -- doubling the number of classes in response to the demand.

Students enrolled at Tsme include many from the restaurant, manufacturing, and other non-care industries.

A 58-year-old woman from Nishinomiya, Hyogo Prefecture, in western Japan, used to work as a tour conductor at a travel agency but has begun studying nursing care because the pandemic forced her employer to shut down. She plans to seek a job in nursing care after completing her course work at Tsme.

Student numbers in classes at Nichiigakkan Co., a top provider of nursing care services, increased about 1.5 times in the April-August period from a year earlier. But many of them are company employees who likely consider nursing care qualifications "as a hedge against losing jobs," a Nichiigakkan official said.

To retain workers in the nursing care sector, "it is important to inform students in advance of what they should pay attention to in nursing care work and follow up with them once they have been employed," the official said.