The Japanese government is considering extending its domestic travel subsidy program beyond late January to continue support for the tourism sector amid the novel coronavirus pandemic, sources familiar with the matter said Wednesday.

Although a new end date is yet to be determined, some ruling party members are calling for an extension through the spring holiday season for the "Go To Travel" campaign, which was launched in late July to boost struggling domestic tourism and consumption, the sources said. 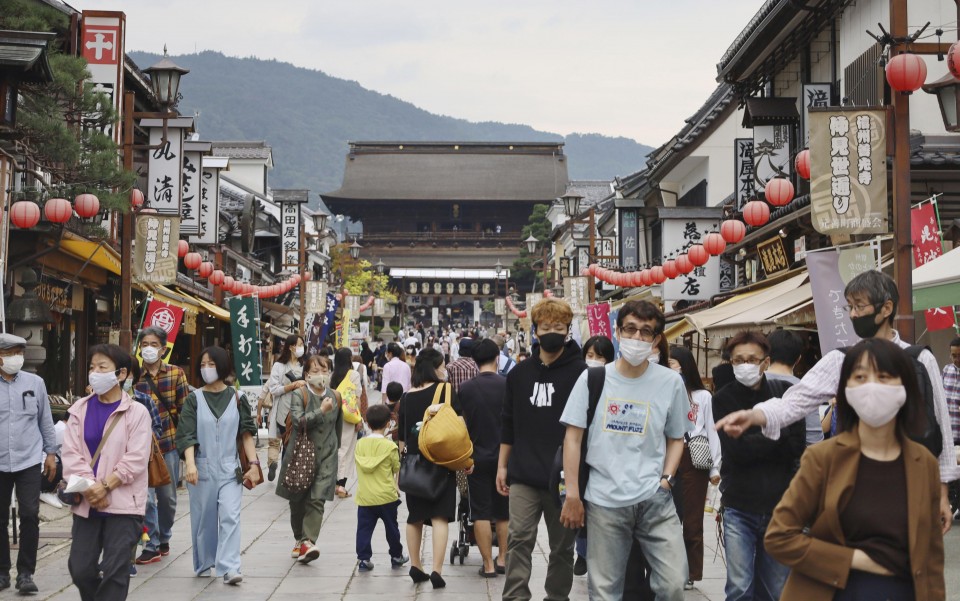 A commercial street leading to Zenkoji temple in Nagano, central Japan, is crowded with tourists on Oct. 4, 2020, the first weekend after the Japanese capital was added to the "Go To Travel" government subsidy program to shore up domestic tourism that has been battered by the coronavirus pandemic. (Kyodo) ==Kyodo

The government also plans to prop up the travel promotion initiative as critics have pointed out that it has failed to sufficiently benefit inexpensive accommodation, and small and medium-sized travel agencies, and to encourage weekday trips, they said.

The government will look into drafting a third supplementary budget for fiscal 2020 as well as using reserve funds in the event that the campaign budget of approximately 1.35 trillion yen ($12.9 billion) is used up, according to the sources.

The travel campaign, which offers a 35 percent discount for hotels and package tour costs, began on July 22, although travel to and from Tokyo was initially excluded due to the high number of new virus infections in the capital at the time.

On Oct. 1, the capital, representing 10 percent of the domestic population, was added to the program and an additional 15 percent discount started the same day in the form of coupons for shopping and dining at travel destinations.

Tetsuo Saito, deputy leader of Komeito, the junior coalition partner of the ruling Liberal Democratic Party, told Prime Minister Yoshihide Suga on Tuesday that the travel campaign should be extended until the Golden Week holidays from late April to early May.

Saito said Suga told him that the program "is not going to end when the budget runs out and will be reviewed according to the circumstances."

Some LDP members and local municipalities have also called for it to be extended.

The end of January is "a tentative" end date, said tourism minister Kazuyoshi Akaba. "We will watch the implementation of the budget to make an appropriate decision regarding an end date."

Chief Cabinet Secretary Katsunobu Kato, the government's top spokesman, echoed the view, telling reporters on Wednesday, "We will make a judgement by checking the (virus) infection situation, the recovery of travel demand and how much of the budget will be used."

Under the travel promotion program, bookings have been skewed toward luxury hotels rather than cheap ones, as guests take advantage of the discount.

Calls have grown for the system to be improved as users have flocked to major travel booking sites, and small and medium-sized travel agencies were struggling to solicit customers.

The Japan Tourism Agency will study plans such as allowing travel agencies to give points for weekday stays that can be used for trip discounts in the future, according to the sources.

The subsidy program covered 25.18 million domestic overnight stays in its first two months through the end of September, with the government funding a total of 109.9 billion yen in discounts, according to the agency.