Japan's cumulative total of confirmed novel coronavirus cases topped 100,000 on Thursday, according to a tally based on official data, amid a recent uptick in the number of new infections coinciding with a resumption of economic activity.

The single-day number of new cases across the country reported Thursday was 809, eclipsing the 800 mark for the first time since Aug. 29, as some clusters of infections have been detected since early this month.

The total figure includes about 700 cases aboard the Diamond Princess, a cruise ship that was quarantined in Yokohama in February. There have been more than 1,700 deaths in the country attributed to the virus.

Confirmed cases in Japan surged in April, prompting the government to declare a nationwide state of emergency that called for people to stay at home and some businesses to temporarily close, while imposing strict entry restrictions for foreign travelers from most of the world.

Daily figures peaked in August at around 1,600 and have since slowed, but experts advising the Ministry of Health, Labor and Welfare have warned of an upward trend again in new infections, with Tokyo continuing to see a steady number of cases while other parts of the country, such as the northernmost main island Hokkaido, are seeing an uptick.

Japan has fared much better than the worst-hit parts of the world such as the United States, which has seen more than 8.8 million confirmed cases. Europe has also been battered, with France and Germany both announcing Wednesday that they are going into lockdown amid an onslaught of infections.

According to data compiled by Johns Hopkins University, Japan's cumulative total of cases ranked 49th in the world. 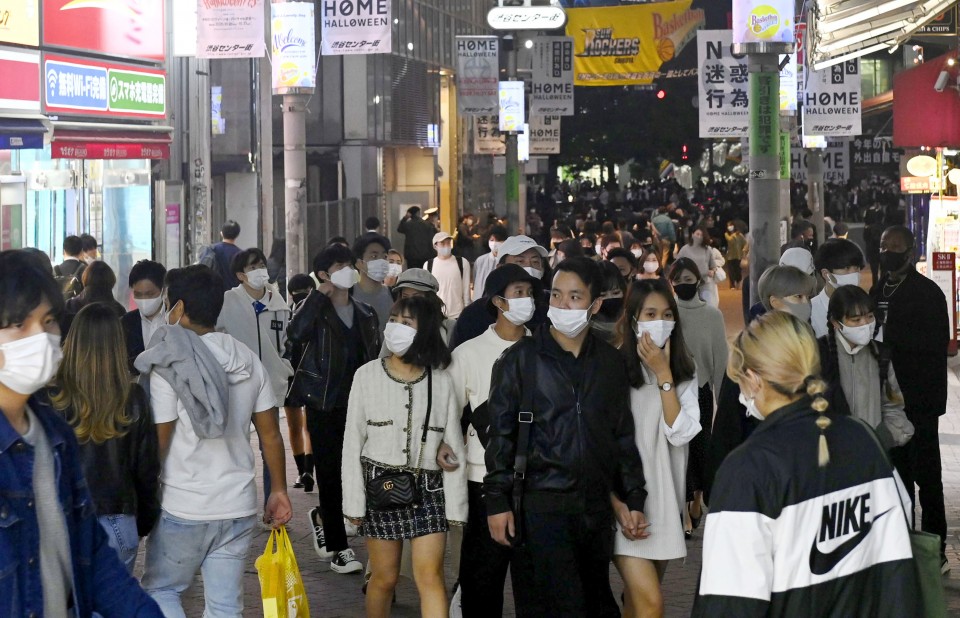 But Japan is worse off than neighbors such as South Korea and Taiwan, which acted quickly to restrict travel and stamp out clusters.

The milestone of 100,000 confirmed cases comes as the administration of Prime Minister Yoshihide Suga is considering extending its domestic travel subsidy program in an effort to prop up the world's third-largest economy, which saw a record contraction in the April-June quarter.

The "Go To Travel" campaign was launched in most parts of Japan in late July and was initially set to expire at the end of January. The later addition of Tokyo, which has reported more than 30,000 coronavirus cases in total, may have contributed to the nationwide increase in infections.

"We believe it is possible to continue social and economic activity by taking effective measures to keep the number of serious cases and deaths to a minimum," Deputy Chief Cabinet Secretary Naoki Okada said at a press conference on Thursday.

Japan is bracing for the flu season, which coupled with the COVID-19 outbreak could put a strain on the medical system. Suga has vowed to support hospitals while aiming to procure enough coronavirus vaccine for the country's entire population by the first half of 2021.