Campaigning began Monday for a Nov. 1 referendum on whether Osaka should become a metropolis akin to Tokyo in 2025.

Some 2.24 million voters in the western Japan city are eligible to take part in what will be a second plebiscite on the Osaka metropolis plan. A similar plan was voted down in 2015 by a slim margin. 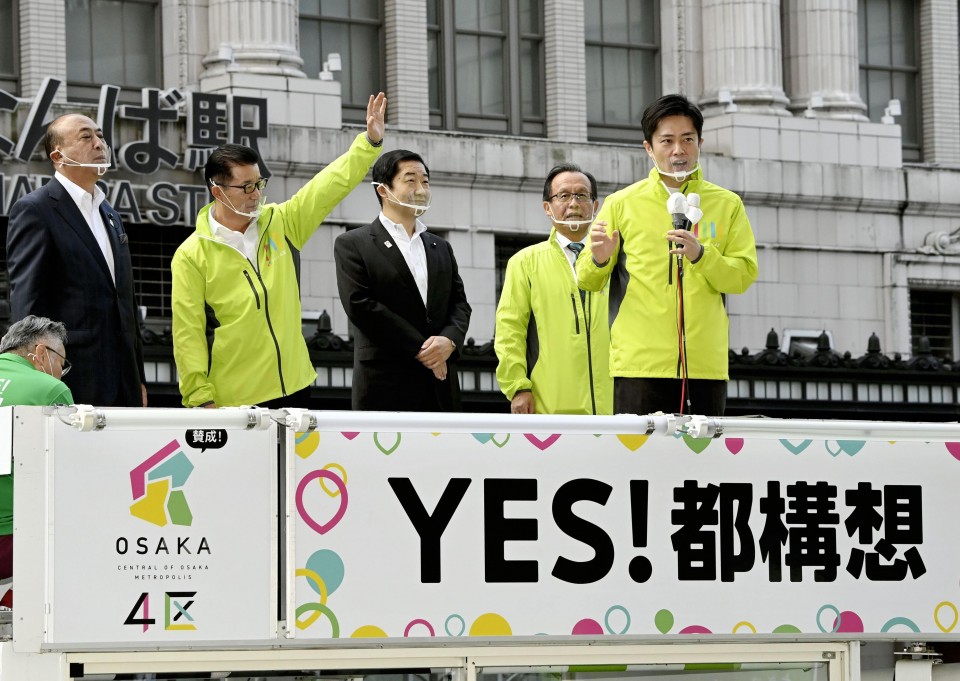 Osaka Gov. Hirofumi Yoshimura (R) makes a speech in support of the proposed restructuring of Osaka into a metropolis like Tokyo on a campaign vehicle in Osaka on Oct. 12, 2020, as campaigning starts for the Nov. 1 referendum on the proposal. (Kyodo)

Proponents say such a measure will lead to cost-effective governance by eliminating duplication of work between the Osaka prefectural and city governments. Opponents, however, argue the coronavirus crisis should be prioritized over the referendum.

A majority vote is required to approve the plan, regardless of turn-out, and it will be legally binding.

If it is voted down again, Matsui, who heads the Japan Innovation Party and the regional political group Osaka Ishin no Kai, will retire from politics after completing his term as mayor through April 2023.

According to the plan, the special wards will be given responsibility for providing services such as education and welfare, while Osaka Prefecture will be in charge of broad-based strategies such as economic growth, tourism and infrastructure maintenance.

Proponents, including Osaka Ishin no Kai and Komeito, argue that it will reduce the city's annual expenditure and lead to economic growth by eliminating functional overlaps between the prefectural and city governments.

Opponents, including the Liberal Democratic Party and the Japanese Communist Party, argue such a change will deliver a hit to the area's coffers, will worsen services for residents and will be an impediment to disaster prevention efforts.

Those opposing the poll have also urged Osaka authorities to focus on addressing the coronavirus pandemic rather than holding the referendum.

The Osaka metropolis plan is a signature policy for Osaka Ishin no Kai. It was originally advocated in 2010 by Toru Hashimoto, a charismatic figure who served as Osaka governor from 2008 and later as mayor in 2011.