Japanese comedian-turned-actor Masanori Ishii is hoping his recently opened exhibition of photos of leprosy sanatoria across Japan will serve as a reminder of the historic discrimination sufferers faced and help prevent similar prejudice against COVID-19 patients and health care workers. 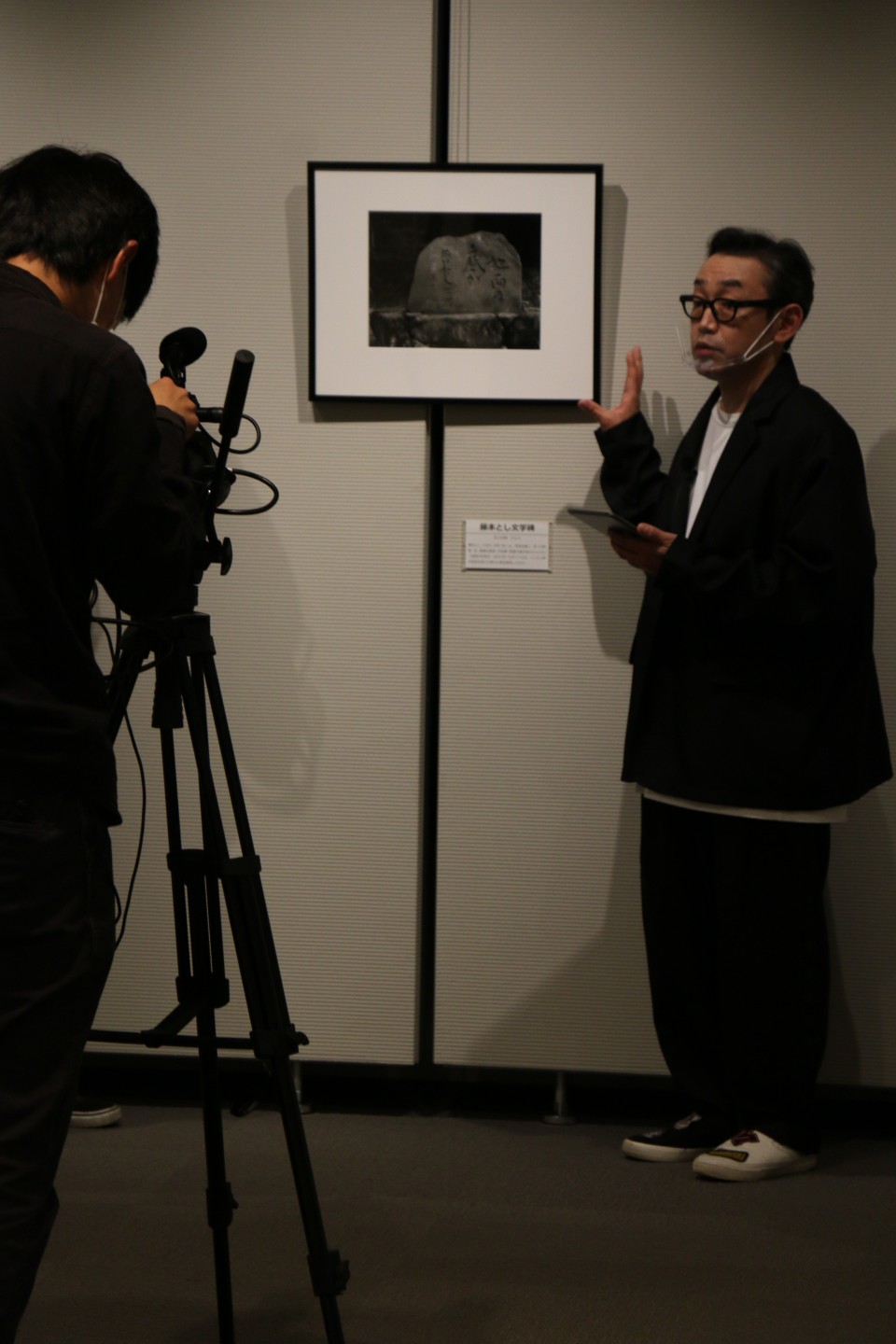 Actor Masanori Ishii talks about his photos during an online talk event on Oct. 11, 2020, at the National Hansen's Disease Museum in Higashimurayama. (Kyodo)

His exhibition at the National Hansen's Disease Museum in Higashimurayama, western Tokyo, includes a number of arresting images, such as a chamber filled with urns containing the ashes of sufferers whose family cut ties with them due to prejudice surrounding the illness; an old bathtub where new patients were disinfected to "cleanse" them; and dismantled buildings that once comprised a prison specifically for inmates found to have leprosy.

Ishii started taking his 27 black-and-white photos of Japan's 13 remaining leprosy sanatoria in 2016, inspired by a TV documentary on a sanatorium in Kagawa Prefecture in western Japan. He traveled across the country, from the southernmost island prefecture of Okinawa to Aomori, the prefecture on the northernmost tip of the main island of Honshu.

While the policy of segregating those with leprosy was abolished almost a quarter of a century ago, and the disease has been curable for even longer, the 13 sanatoria continue to house people, with 1,090 staying there as of May 1. The residents, all of whom no longer suffer from the disease, have generally lost family ties or any means of livelihood due to the decades they spent in isolation and the discrimination that continues to exist in society.

Ishii, 47, made his debut as a member of the stand-up duo "Ari to Kirigirisu" (The Ant and The Grasshopper) in 1994 before making a career move into acting in the late 1990s. While less known as a photographer, he has contributed photos to previous exhibitions. The current exhibition, however, is the first time his work has appeared on its own.

He has appeared in several TV dramas and movies, including the film "Fukushima 50," a film depicting workers handling the meltdown of the nuclear power plant following the 2011 earthquake and tsunami disasters, released earlier this year. He is less known for his prowess as a photographer.

The photo exhibition had been initially scheduled to be held this spring but was postponed due to the outbreak of the novel coronavirus.

Ishii's original intention had been to portray the tragic history of leprosy patients in Japan but his understanding of the significance of the photos expanded once the pandemic hit. 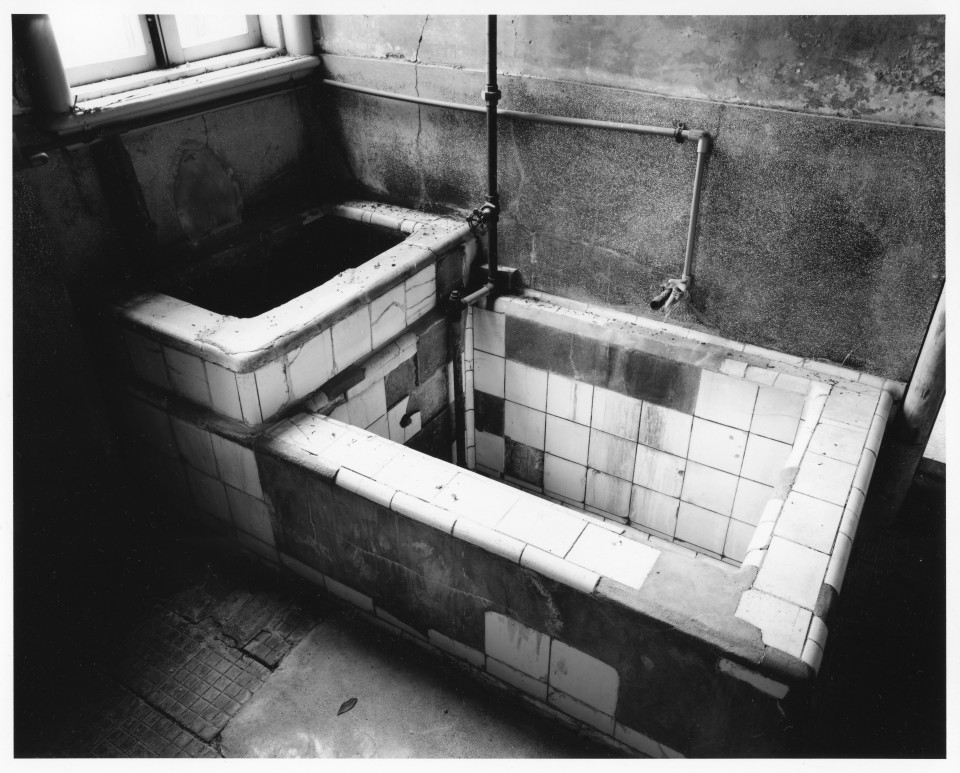 Photo taken by Masanori Ishii in 2018 shows an old bathtub where new patients were disinfected to "cleanse" them at the National Sanatorium Nagashima-Aiseien in Setouchi, Okayama Prefecture. (Photo courtesy of Masanori Ishii)(Kyodo)

"I think my photo exhibition acquired additional meaning following the virus outbreak, given that leprosy patients faced severe discrimination in the past," he said in a recent interview with Kyodo News.

In Japan, an isolation policy for leprosy patients was in force between 1907 and 1996, forcing them to live in facilities segregated from their family members and the rest of society.

Leprosy is a chronic bacterial disease that mainly affects the skin and nerves, but it is not highly contagious -- as originally believed -- and has been curable using drugs developed since the 1940s.

According to some, the shadow cast by the isolation policy, and the controversy it aroused, fell on Japan's early response to the novel coronavirus outbreak.

In July, Keiichiro Kobayashi, a research director at the Tokyo Foundation, a public policy think tank, caused a stir when he drew a link between the limited number of PCR tests Japan was conducting for the virus in the initial phase of the pandemic and a ruling that the courts had eventually made against the isolation policy for leprosy patients several years after it ended.

"Segregation for those who test positive for the coronavirus is needed, but the government does not want to face criticism that it is violating human rights again," he said during a television appearance as a commentator on a TV Asahi program. 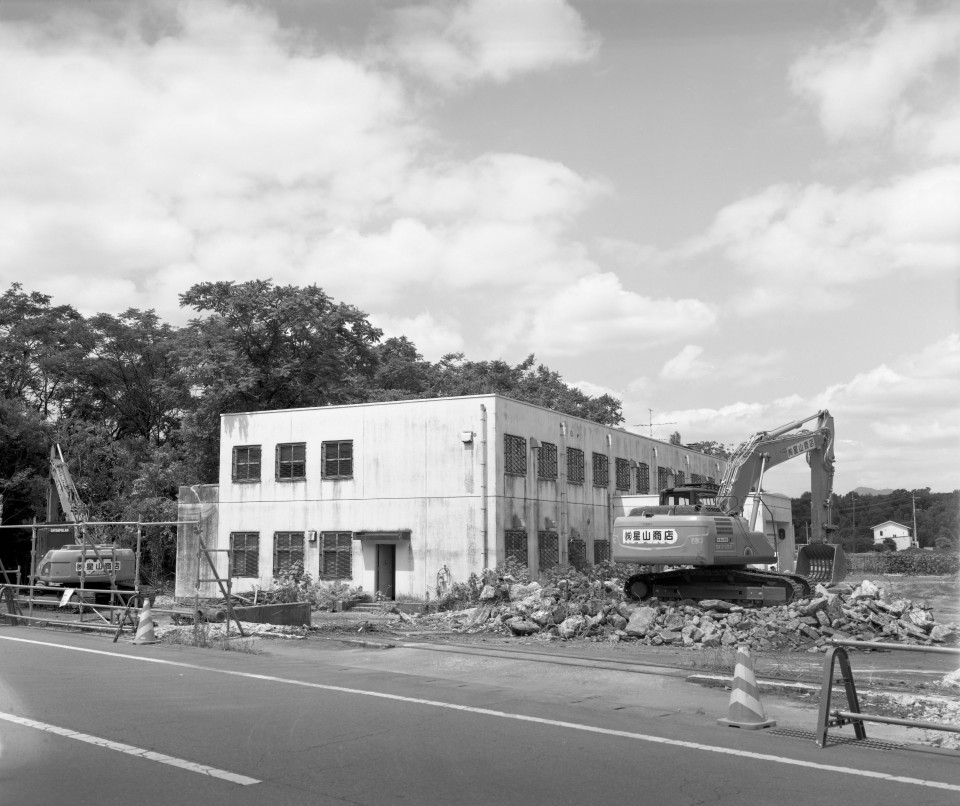 Photo taken by Masanori Ishii in 2019 shows a former prison for convicts found to have leprosy being dismantled near the National Sanatorium Kikuchi Keifuen in Koshi, Kumamoto Prefecture. (Photo courtesy of Masanori Ishii)(Kyodo)

In Japan, those who test positive for the novel coronavirus who show either mild or no symptoms are requested to "voluntarily" stay home or in a hotel room offered by local authorities for a certain period as a public health measure to curb infections, while those who develop serious cases of COVID-19 are hospitalized for treatment.

TV Asahi later apologized for the comment after receiving protests from former leprosy patients and plaintiffs who had sought damages over the central government's discriminatory policy. They argued that for them, there had never been any medical need for isolation at all.

"The isolation policy was based on discrimination against leprosy patients, not aimed as a medical countermeasure," Isao Tateyama, secretary-general of the plaintiff group, said at a press conference in late July. 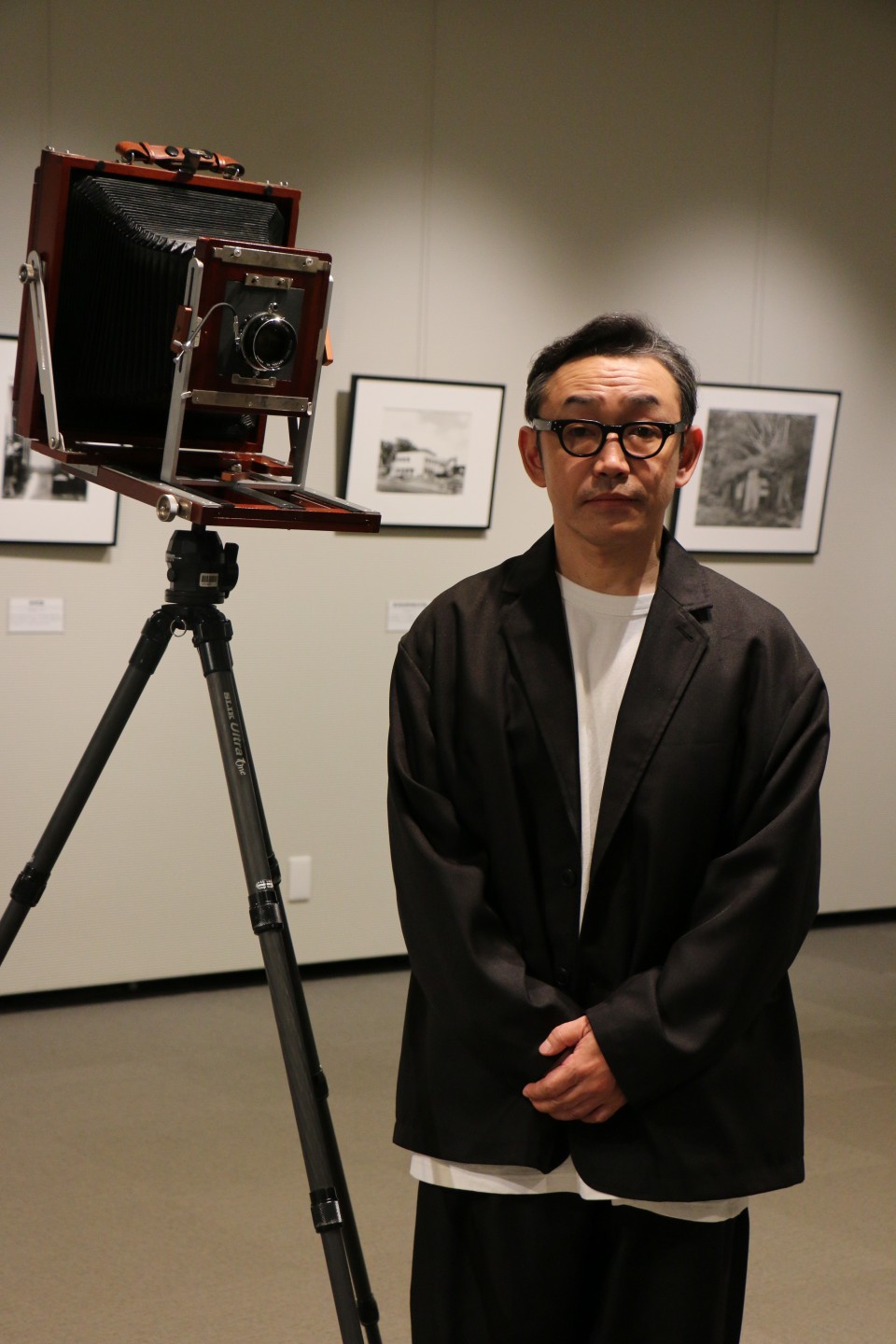 Actor Masanori Ishii poses for a photo on Oct. 11, 2020, at the National Hansen's Disease Museum in Higashimurayama. (Kyodo)

In 2001, the Kumamoto District Court in southwestern Japan ruled the isolation policy for leprosy patients was unconstitutional and awarded 1.8 billion yen ($17 million) in damages to 127 former patients who had sued the central government.

However, some two decades later, the coronavirus pandemic has aroused concerns that discrimination and ostracism may be occurring again as a response to a disease, with not only COVID-19 patients but also health care workers who treat patients being targeted.

In a survey conducted in August by the Japan Federation of Medical Worker's Unions, 20.8 percent of its 120 medical facilities responded that its workers encountered discrimination or harassment due to the pandemic, such as the refusal of hair salon reservations and verbal attacks from neighbors.

Iwate Prefecture in northeastern Japan was for some time the only prefecture in Japan with no COVID-19 patients, only seeing its first two cases in late July.

But the company where one of the two men testing positive worked received about 80 calls or emails in just two days criticizing it over the infection, with some demanding the man's dismissal.

"A lot of former leprosy patients have voiced their concerns that Japan should never again discriminate against people because of their illness," said Tetsuya Kimura, chief curator at the National Hansen's Disease Museum. 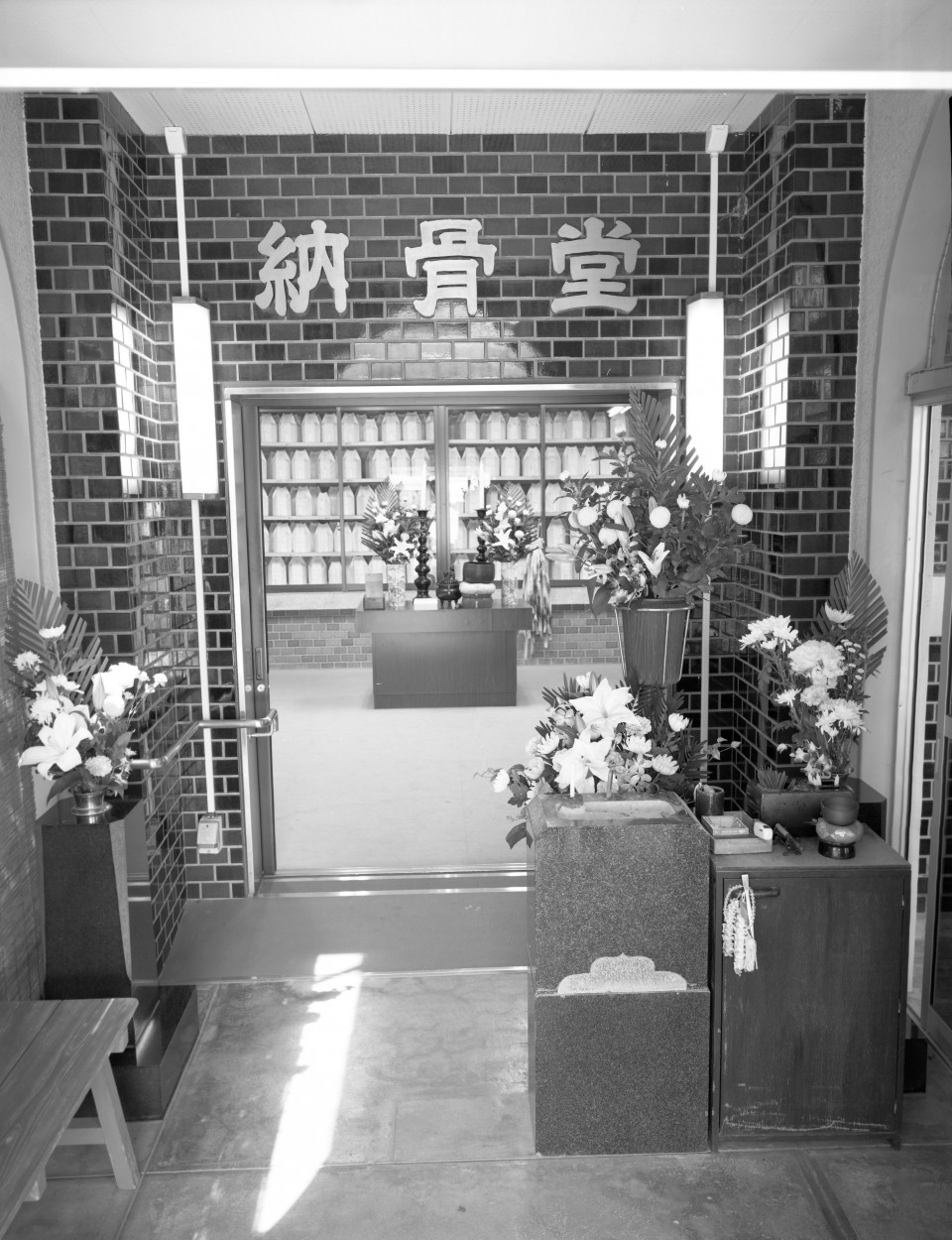 "Through his photo exhibition, viewers come to understand the fact that everyone faces the possibility of becoming a patient of an infectious disease by chance and being discriminated against."

Earlier in the month, Ishii held an online talk event from the museum to explain his photos. He touted the film's large 8x10 format, which he said can "project enormous amounts of information."

"I decided to take photos with this size of film to express the history of the sanatoriums," he said.

Ishii's photo exhibition will be held through Nov. 23, but online reservations are required to visit the museum as it accepts only 10 visitors in the morning and the afternoon, respectively, in a bid to curb virus infections.

"I believe my photos can help show that discrimination is wrong. I hope those who have not been interested in these kinds of social issues come and see my exhibitions," Ishii said in the interview.

Ishii will hold another online talk event through the National Hansen's Disease Museum website at 3:30 p.m. on Nov. 3.