The Supreme Court ruled Thursday that it is "unreasonable" for Japan Post Co. not to provide its fixed-term employees with the same allowances it pays to regular workers.

The top court's judgement in favor of nonregular workers came two days after its rulings against them in two different cases over a law that prohibits unfair gaps between the treatment of such employees and regular workers.

The court's No. 1 Petty Bench, presided over by Justice Atsushi Yamaguchi, addressed allowances widely paid in Japan to employees whose family members are financially dependent on them as well as extra pay for work during the year-end and New Year holidays -- the busiest season for the mail service due to greeting-card delivery. 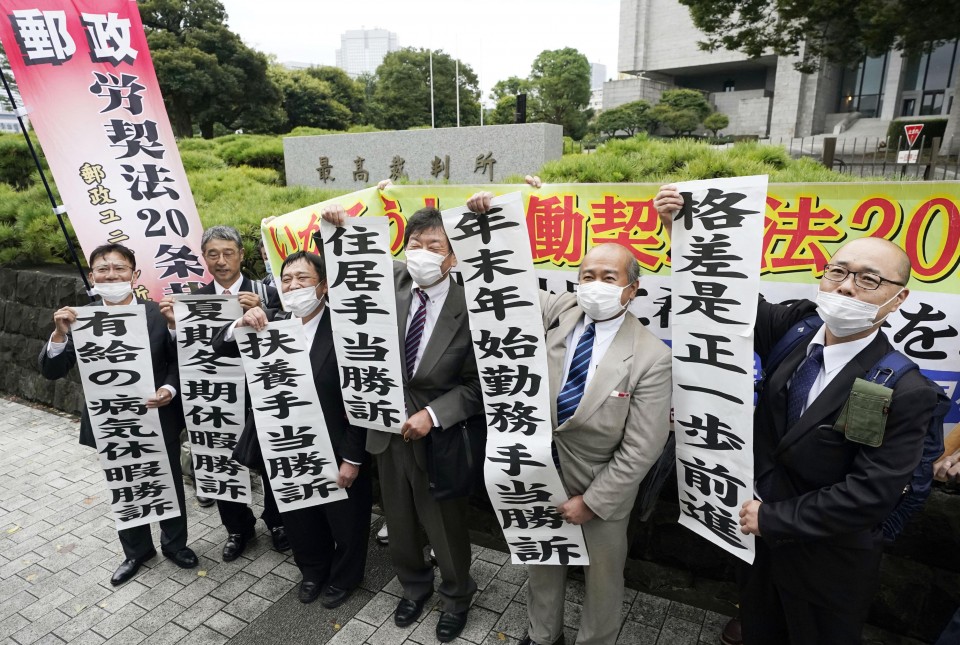 Plaintiffs cheer after the Supreme Court rules in favor of them in Tokyo on Oct. 15, 2020. (Kyodo)

The court said it was "illegal" not to include the plaintiffs in the additional payroll, as they had been working at the company long-term through repeatedly renewed contracts.

Nearly half of the approximately 390,000 employees at Japan Post are nonregular workers. The ruling is expected to put pressure on the firm to dramatically revise its work conditions.

"We will swiftly conduct labor negotiations following the ruling, and work on reforming the system in light of the issue's importance," Japan Post said in a statement.

A total of 12 nonregular employees, including two who have since retired, had filed three lawsuits in 2014 in Tokyo, Osaka in western Japan and Saga in southwestern Japan, leading to different high court rulings in the respective regions.

After the law prohibiting unreasonable gaps in treatment between fixed-term and indefinite-term employees took effect in 2013, the government set a policy of equal pay for equal work but critics say it is unclear to what extent it prevents different treatment.

The employees, who worked at post offices in Tokyo, Chiba, Aichi, Osaka, Hyogo, Hiroshima and Saga prefectures, also took issue with their employer for not entitling them to summer and winter holidays or sick leave.

The top court said the damages awarded for lawsuits filed in Tokyo and Osaka needed to be recalculated, repealing a section of the previous rulings, and referred the cases back to their respective high courts.

As for a lawsuit filed at the Saga District Court, Japan Post had appealed the ruling given by the Fukuoka High Court ordering it to pay the nonregular worker about 60,000 yen ($570) in compensation, saying the lack of summer and winter holidays was unlawful.

On Tuesday, the top court's No. 3 Petty Bench rejected the provision of bonus and retirement payments to nonregular employees of Osaka Medical College and Metro Commerce, a subsidiary of Tokyo Metro Co., which runs the capital's subway system.

The top court had said in June 2018 that whether different treatment is unreasonable should be judged not only by the total pay but by the purpose of each item making up pay and allowances.