The foreign ministers of Japan, the United States, Australia and India affirmed Tuesday they will step up coordination to realize a free and open Indo-Pacific, taking aim at what Washington called China's "exploitation, corruption and coercion" of smaller states in the region.

Speaking at the meeting, Pompeo said, "It is more critical now than ever that we collaborate to protect our people and partnerships from the Chinese Communist Party's exploitation, corruption and coercion."

"We see it in the South and East China seas, in Mekong, the Himalayas, Taiwan Strait, these are just a few examples," Pompeo told the meeting, the second of its kind since the inaugural session in New York in September last year.

Motegi said the four ministers exchanged views on China's attempts to undermine Tokyo's administration of the Senkaku Islands in the East China Sea and Beijing's militarization of disputed areas in the South China Sea, in a veiled counter to China's attempts to alter the regional status quo by force or coercion.

The ministers agreed to boost cooperation over maritime security, cyberspace and the building of quality infrastructure in the region, he said.

They also agreed to hold the four-way foreign ministerial meeting on a regular basis, and convene a third session at an appropriate time next year, according to the Japanese Foreign Ministry. 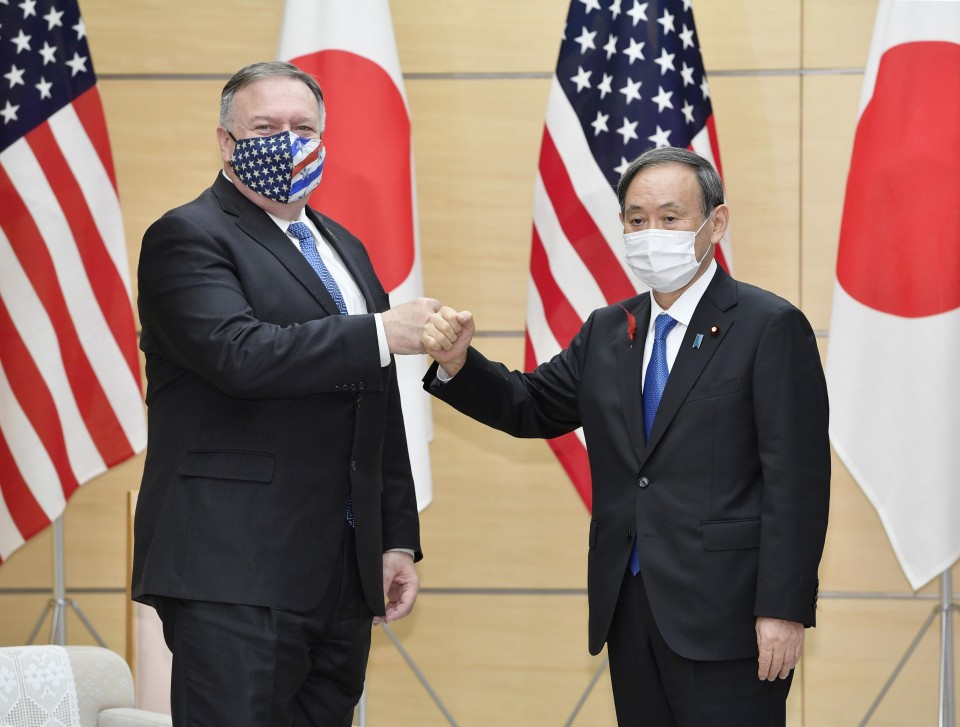 In a separate meeting with Pompeo, Payne and Jaishankar, Japanese Prime Minister Yoshihide Suga said a free and open Indo-Pacific is "widely recognized by the international community as a vision of peace and prosperity for this region."

Suga said his government's basic policy is to "further continue advancing our members to this end," as he vowed to promote the upholding of the rule of law, freedom of navigation and overflight, and peaceful settlement of disputes in partnership with the three countries, particularly as the novel coronavirus has spread globally.

The quadrilateral meeting served as an inaugural diplomatic test for Suga, who took office in mid-September in the first leadership change in nearly eight years. It was also the first ministerial-level multilateral meeting since the virus hit Japan.

China has been wary of the Quad meeting, seeing it as an attempt to contain the country.

Speaking at the four-way ministerial talks, Pompeo said the coronavirus crisis, which first erupted in Wuhan, central China, late last year, was made worse by a "cover-up" by the Communist Party.

"The regime's authoritarian nature led its leaders to lock up and silence the very brave Chinese citizens who were raising the alarm," he said.

With growing rivalry between Washington and Beijing, especially weeks before the Nov. 3 U.S. presidential election, President Donald Trump's administration has been a fierce critic of China, on issues ranging from security and human rights to trade and the virus.

India and China, while having traditionally close economic ties, are also at loggerheads over a disputed border region in the Himalayas that led to a deadly clash in June.

Relations between Australia and China have also worsened after Canberra in April called for an independent inquiry into the origins of the coronavirus pandemic, triggering trade frictions.

Japan, meanwhile, is concerned about China's territorial claims over the Senkaku Islands, called Diaoyu in China, in the East China Sea. But Tokyo is also looking at striking a delicate balance between Beijing, its biggest trading partner, and its major security ally Washington.

But it was only Pompeo who publicly criticized China in his remarks at the meeting, while Motegi, Payne and Jaishankar did not name the world's second-biggest economy explicitly.

The ministers did not release a joint statement, nor hold a joint press conference.