A memorial service was held Saturday for Shigeru Yokota, a prominent figure in Japan due to his tireless campaigning for the return of his daughter Megumi and her compatriots who were abducted by North Korea in the 1970s and 1980s.

Prime Minister Yoshihide Suga pledged at the event to work toward a resolution of the issue, while repeating his intention to seek direct talks with North Korean leader Kim Jong Un, although Pyongyang says the issue has been completely resolved. 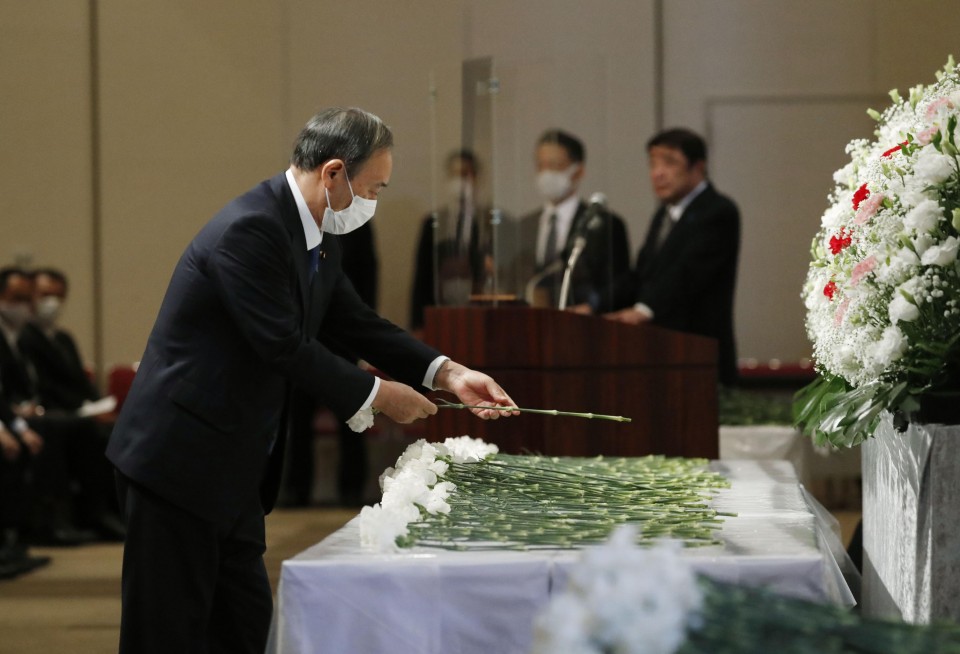 Suga described Yokota as someone "whose words moved people's hearts," adding, "I will take the lead in making a breakthrough (on the abduction issue) without missing any opportunities."

He later joined a meeting of family members of abduction victims and their supporters and said, "Establishing a fruitful relationship between Japan and North Korea will be in the interests of both countries and greatly contribute to the peace and stability of the region."

Yokota, who died in June at age 87 from natural causes, was tragically drawn into the issue when his oldest daughter Megumi was abducted in 1977 at age 13.

He worked for more than two decades alongside family members of other abductees in pressing the Japanese government to make every effort to rescue their loved ones, who they believe are still alive in the North.

Yokota's daughter, however, has yet to return to Japan after her kidnapping and he never saw her again.

"I believe Megumi is fine," Yokota's widow Sakie, 84, said at the memorial. "When I'm depressed, I always talk to (Shigeru's) photo."

The number of people at the event was limited due to the coronavirus pandemic. Former Prime Minister Shinzo Abe also attended it.

When Yokota was working for the Niigata branch of the Bank of Japan, Megumi, who was in her first year of junior high school, disappeared on her way home from school on Nov. 15, 1977.

Yokota and his wife, along with seven other families of Japanese citizens abducted by North Korean agents, formed a victims' group in March 1997 to raise public awareness of the abduction issue.

Yokota served as the group's chief for more than 10 years until November 2007, when he resigned due to health reasons. He was succeeded by Shigeo Iizuka, the older brother of Yaeko Taguchi, who was abducted by North Korea in 1978 when she was 22.

Yokota continued to work with his wife on the abduction issue, before falling ill and being hospitalized in April 2018.