Thailand's parliament on Monday debated how to respond to anti-government protests, with Prime Minister Prayut Chan-o-cha vowing to facilitate a parliamentary process to rewrite the Constitution, which is one of the students' demands.

By accelerating the debate on the revision of the military-sponsored 2017 Constitution, under which the 250-seat upper house Senate was entirely appointed by the military, the aim is to calm the student-led demonstrations as soon as possible. 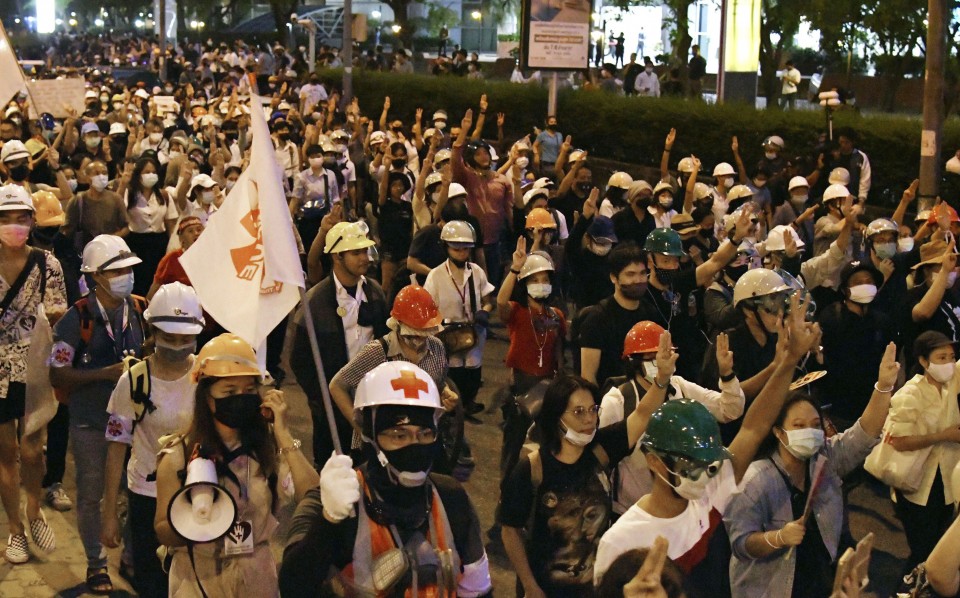 Anti-establishment demonstrators march on the German Embassy in Bangkok on Oct. 26, 2020, calling for reform of the monarchy and the resignation of Prime Minister Prayut Chan-o-cha. King Maha Vajiralongkorn spends most of his time in Germany instead of Thailand, which has stirred controversy. (Kyodo) ==Kyodo

Meanwhile, around 10,000 protesters calling for reform of the monarchy marched to Germany's embassy to petition Berlin to disallow King Maha Vajiralongkorn, who habitually resides in Germany instead of Thailand, from engaging in state affairs from its soil.

In a statement and in a letter delivered to the embassy, the protesters accused the king of using his royal prerogative to conduct Thai state affairs from his habitual abode in Germany and even ordering the forced disappearances of opposition figures.

They urged Berlin to declare him persona non grata, citing a petition that has garnered 210,000 signatures among Thais even at the risk of their being prosecuted for lese-majeste, or insulting the monarchy.

"The request is aimed to reinstate Vajiralongkorn to Thailand and institute the monarch to be under the Constitution in order to bring Thailand back to the path of the truthful constitutional monarchy," says a "Statement from The People" which also declared "down with feudalism."

Ahead of the march, hundreds of defenders of the monarchy dressed in yellow gathered outside the German Embassy, chanting "Long live the king!" and carrying banners with messages of support.

They also submitted a letter to an embassy official.

But there were no clashes between protesters and the royalists, who dispersed before the former arrived.

The German government had already warned the Thai king not to rule his country remotely from its soil.

"We have made it clear that Thai politics should not be conducted from German soil," Heiko Maas, the German foreign minister, said two weeks ago after the government was questioned about the issue in parliament.

Frithjof Schmidt of the opposition Green party had asked the foreign minister, "Why does the German government tolerate this highly unusual, and in my opinion illegal, practice of a foreign head of state conducting politics on German soil?"

The king, who ascended to the Thai throne in 2016, has been back home since early October and plans to stay until next month.

At the parliamentary debate, Prayut said he expected some progress within the year on amending the Constitution. 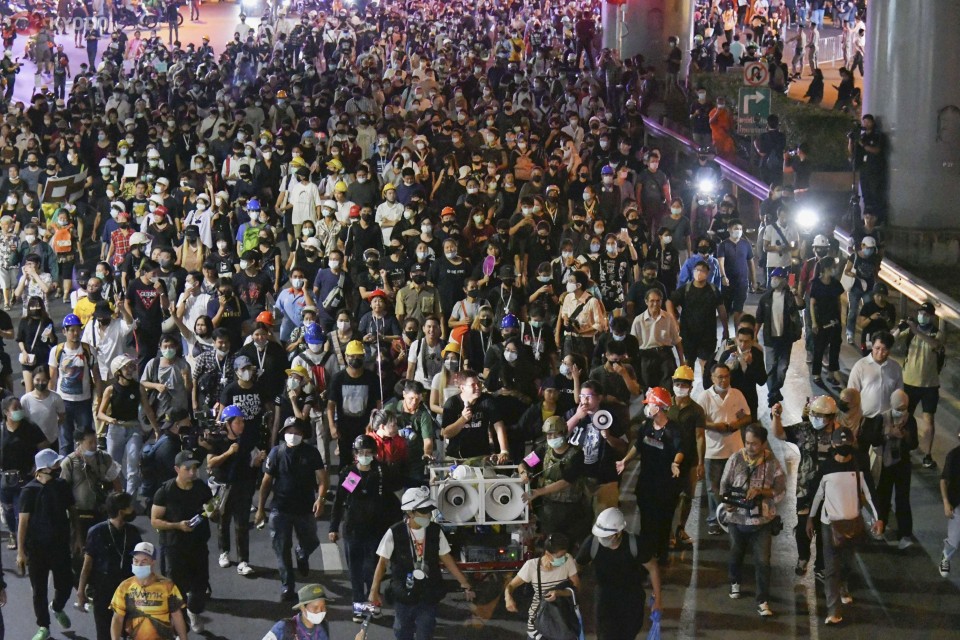 Anti-establishment demonstrators march on the German Embassy in Bangkok on Oct. 26, 2020, calling for reform of the monarchy and the resignation of Prime Minister Prayut Chan-o-cha. King Maha Vajiralongkorn spends most of his time in Germany instead of Thailand, which has stirred controversy. (Kyodo) ==Kyodo

Critics say it was devised to prevent the most popular political party, Pheu Thai, which had won most elections since 2001 with the backing of supporters of ousted Prime Minister Thaksin Shinawatra, from returning to power.

The prime minister suggested his government has been responsive to the other demands of the protesters, such as revoking the state of emergency he declared on Oct. 15 after just one week and releasing of some arrested protesters.

Opposition leader Sompong Amornvivat, who heads Pheu Thai, called on Prayut to step down to take responsibility for his mistakes, particularly the violent dispersion of protesters on Oct. 16 using water cannon, and to release protest leaders and others arrested during the rallies.

Students had last week demanded that Prayut resign by Saturday night, but the prime minister refused and urged a solution be sought through discussions between the ruling and opposition parties in the extraordinary session of parliament, which continues for a second and final day Tuesday.

The government lifted the state of emergency, in which gatherings of more than four people were banned, on Oct. 22 as a concession to the demonstrators, but they have not been mollified.