Japanese Defense Minister Nobuo Kishi agreed Wednesday with his U.S. counterpart Mark Esper to work together closely to push ahead with an alternative to the scrapped deployment of the U.S.-developed Aegis Ashore missile interception system, Japan's Defense Ministry said.

Kishi told reporters he explained to Esper over the phone that Tokyo is seeking to come up with a substitute plan by the end of this year. Japan is examining three sea-based plans in place of the land-based system, which was aimed at protecting the country from the threat posed by North Korean missiles.

In June, the government under then Prime Minister Shinzo Abe, Kishi's elder brother, decided to abort the plan to deploy the Aegis Ashore system in Akita Prefecture, northeastern Japan, and Yamaguchi Prefecture in the west, due to technical problems and ballooning costs. 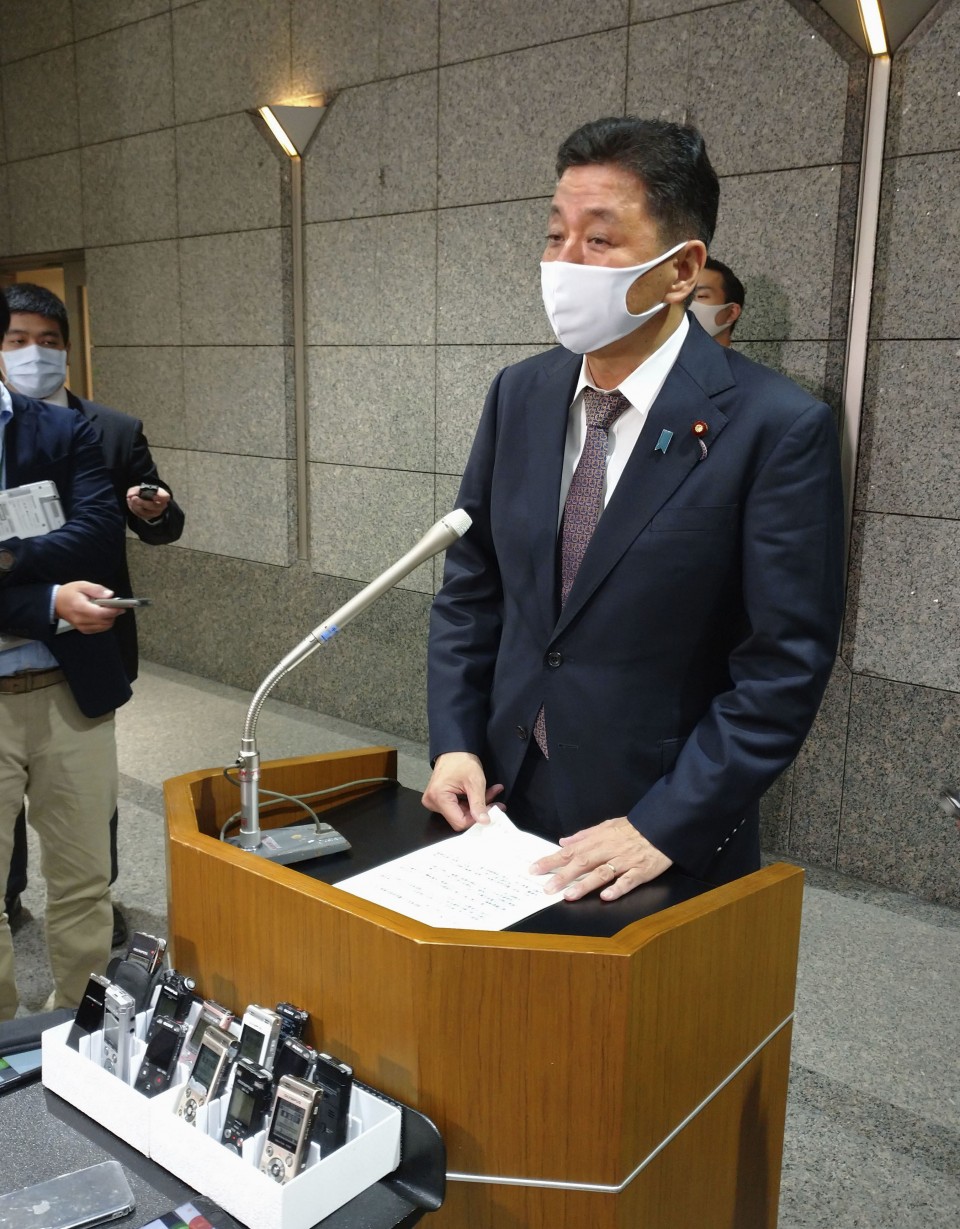 Japanese Defense Minister Nobuo Kishi meets the press at his ministry in Tokyo on Oct. 7, 2020, after holding talks on the phone with U.S. Defense Secretary Mark Esper. (Kyodo)

The three alternatives under consideration are the introduction of destroyers equipped with an interception system, utilization of ships that belong to the private sector and an offshore structure similar to those used to drill for oil.

The phone conversation came a day after foreign ministers of the two countries plus those of Australia and India met in Tokyo, during which the participants reaffirmed their maritime security cooperation in the Indo-Pacific region amid China's growing assertiveness there.

Kishi told reporters he indicated his willingness in his talks with Esper to hold a similar meeting involving defense chiefs from the four major Indo-Pacific democracies, collectively known as the Quad.

"It would be very meaningful if the four countries could exchange their views in the field of defense as well," he said.

During his first consultation with a foreign counterpart since taking office last month, Kishi also discussed with Esper regional issues including those involving the East and South China seas, where China is engaged in territorial disputes with its neighbors, and North Korea's military threat, according to the ministry.

The two confirmed that Tokyo and Washington will continue to play their roles in ensuring peace and stability in the region based on their security alliance, the ministry said.

They also reaffirmed continued efforts to promote the controversial plan to transfer the U.S. Marine Corps Air Station Futenma from a crowded residential area in Ginowan to the Henoko coastal area of Nago, both in southern Japan's Okinawa Prefecture, under a 1996 bilateral agreement, the ministry added.