Late substitute Naomichi Ueda struck an injury-time header to clinch a 1-0 friendly win for Japan over Ivory Coast on Tuesday.

After being brought on in the 89th minute, the center-back for Belgian side Cercle Brugge delivered the winner two minutes later, meeting Gaku Shibasaki's long free kick near the back post for his first international goal. 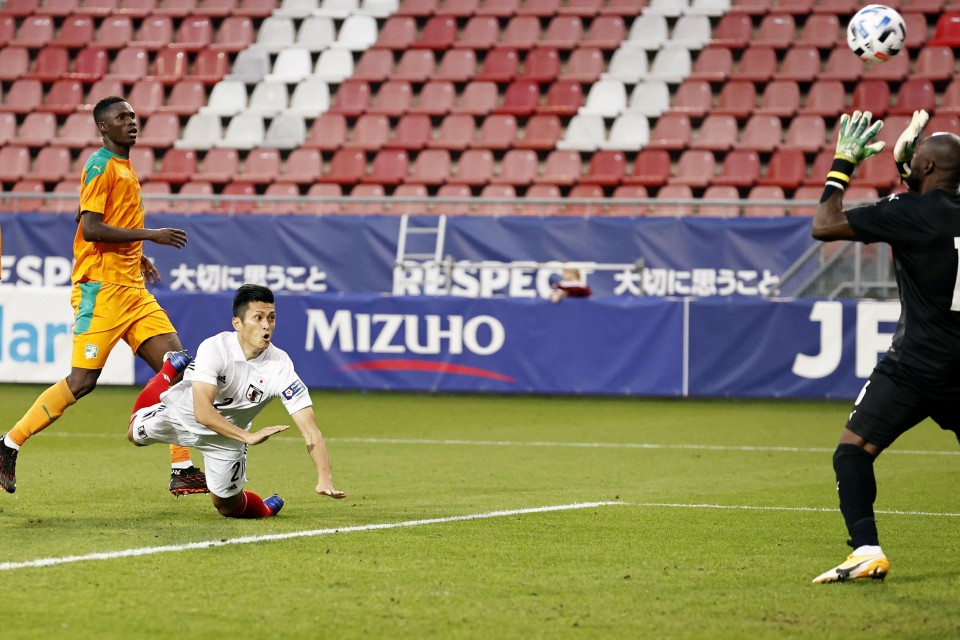 Naomichi Ueda of Japan scores the 1-0 during the friendly match between Japan and Ivory Coast at Stadium Galgenwaard on October 13, 2020 in Utrecht, Netherlands. (ANP Sport/Getty/Kyodo)

"I thought there might be a chance from the set play, and it was a great ball. Gaku hit it well," Ueda said.

The match was the second of two friendlies at Utrecht's Stadion Galgenwaard featuring a Samurai Blue squad comprised entirely of Europe-based players.

Japan manager Hajime Moriyasu moved rising star Takefusa Kubo into the starting lineup as one of several changes to the team who played a scoreless draw against Cameroon here on Friday.

The 19-year-old Villarreal winger was in the thick of the action early, sending a shot over the bar in the second minute. He created Japan's best chance of the opening half with a cross to Musashi Suzuki, whose shot was smothered directly in front of goal.

Veteran forward Gervinho -- who scored the winner in Ivory Coast's 2-1 defeat of Japan at the 2014 World Cup -- forced the first save of the match when he was stopped by Japan keeper Daniel Schmidt early in the second half.

Daichi Kamada, Takumi Minamino and Genki Haraguchi were on target for Japan in the second half, but Ivory Coast keeper Sylvain Gbohouo was able to make a straightforward save each time.

The Japan Football Association decided to contest the two friendlies without players from the J-League, which is playing through the international window in order to complete a heavily condensed schedule following a roughly four-month break due to the coronavirus pandemic.

Players returning to Japan after traveling overseas would also be unavailable to their teams while undergoing quarantine to prevent the spread of the virus.

Moriyasu lauded his players for their performance under unusual conditions.

"Every player -- the starters, the substitutes, the ones who didn't get on the pitch -- really put everything into their preparation for these matches," Moriyasu said.

"We picked players who were in good condition to come play in the Netherlands, and were confident we could win." 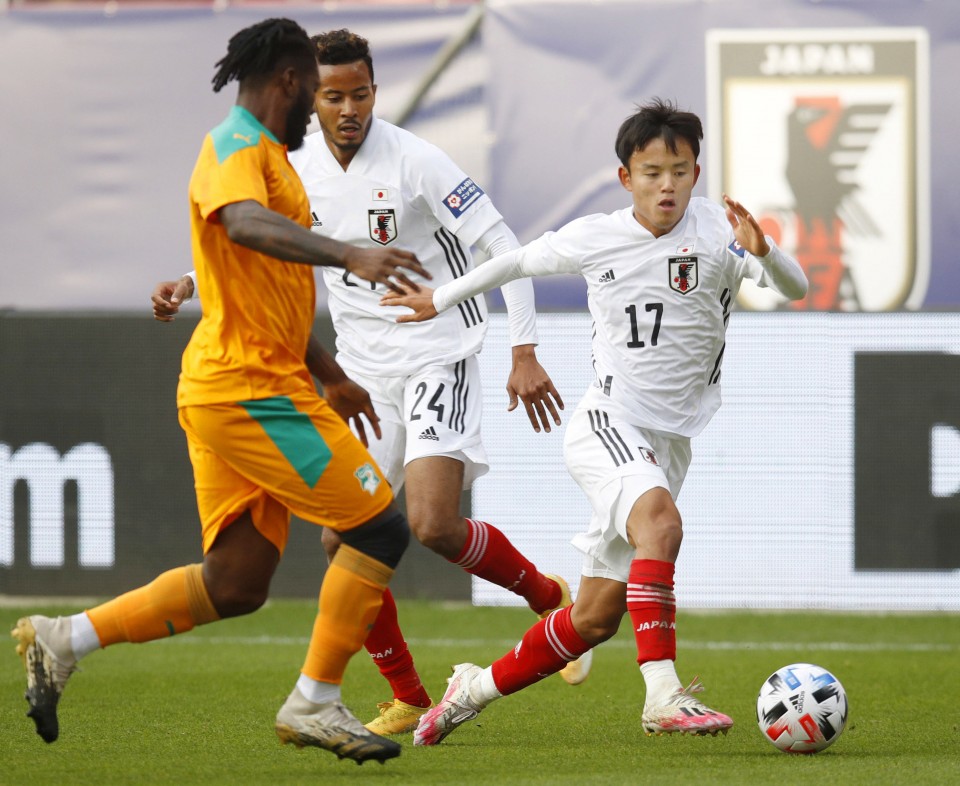 Takefusa Kubo (R) of Japan plays during the first half of an international football friendly against Ivory Coast on Oct. 13, 2020, in Utrecht, the Netherlands. (Kyodo) 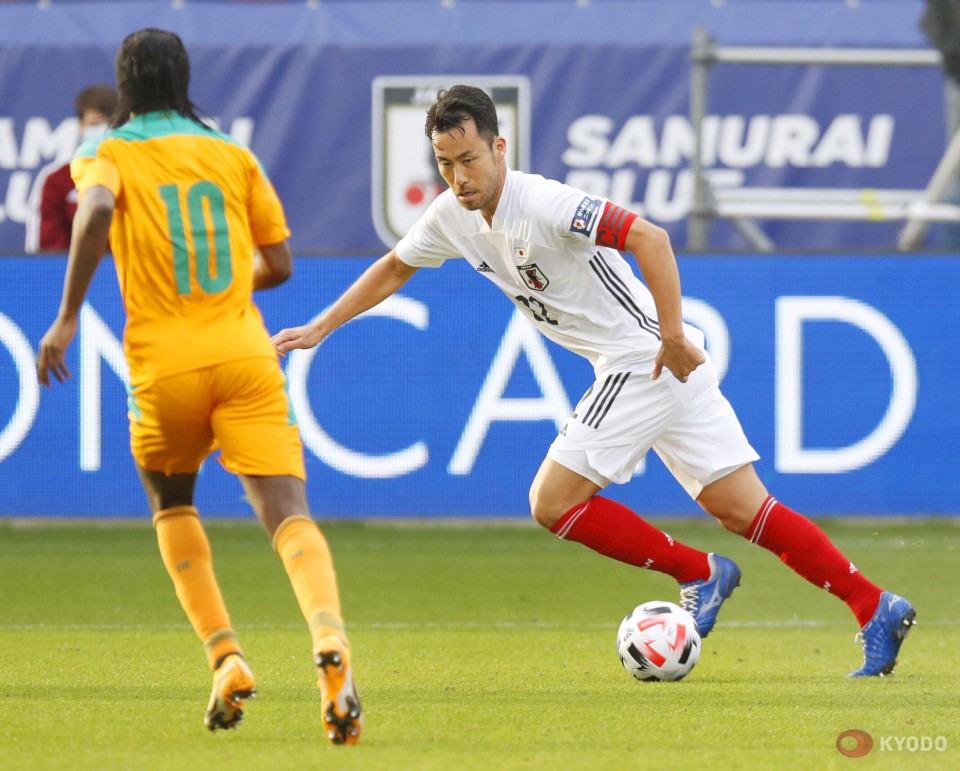 Maya Yoshida (R) of Japan collects a pass during the first half of an international football friendly against Ivory Coast on Oct. 13, 2020, in Utrecht, the Netherlands. (Kyodo) 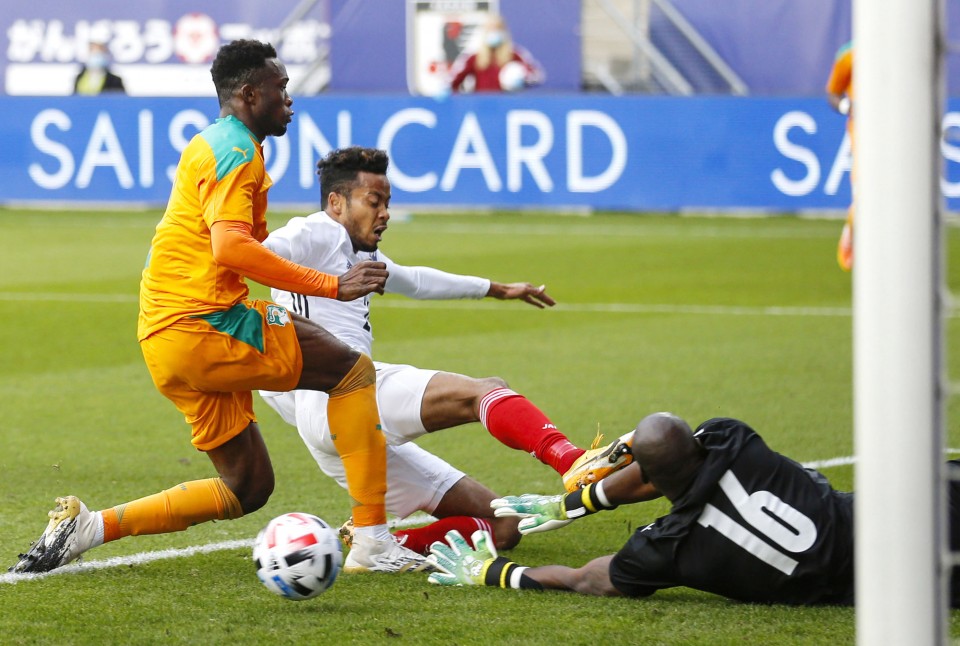 Ivory Coast goalkeeper Sylvain Gbohouo (16) attempts a save during the first half of an international football friendly against Japan on Oct. 13, 2020, in Utrecht, the Netherlands. (Kyodo)