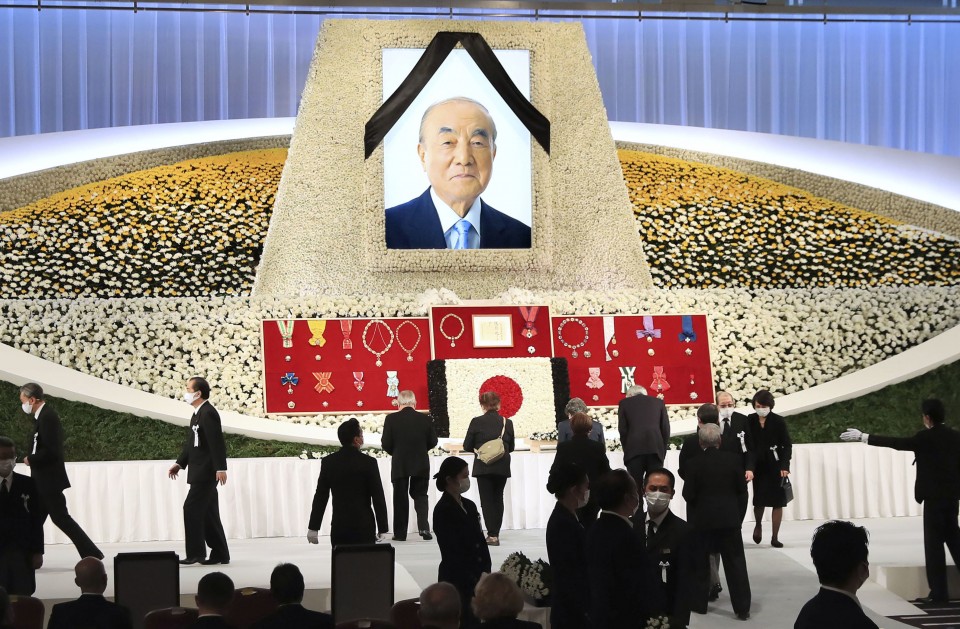 A memorial service funded by the state and the ruling Liberal Democratic Party is held at a Tokyo hotel on Oct. 17, 2020, for former Prime Minister Yasuhiro Nakasone, who died in November 2019 at 101. (Pool photo) (Kyodo)

A state-funded memorial service for former Prime Minister Yasuhiro Nakasone, who died at the age of 101 in November last year, was held on Saturday, with some universities flying Japanese flags following a government request to do so.

The event, arranged by the central government and the ruling Liberal Democratic Party, came amid criticism by academics and the opposition camp over whether it was appropriate for the government to ask national universities and other official institutions to fly flags at half-mast and observe a moment of silence on the same day.

The joint memorial service also drew criticism from opposition lawmakers over the hefty cost of the event.

After observing a moment of silence, Prime Minister Yoshihide Suga, who attended the memorial service at a Tokyo hotel, cited the accomplishments of Nakasone, describing the Japanese leader between 1982 and 1987 as having "executed the necessary reforms and contributed to international peace and prosperity."

Nakasone "significantly raised the international profile of our country," Suga said in an address, referring to the Cold War-era and a time when Japan was experiencing trade friction with the United States.

Nakasone was known for his close relationship with late U.S. President Ronald Reagan, with whom he built a robust bilateral alliance.

On the domestic front, Nakasone also led efforts to privatize state-owned railway and telecommunication companies and pushed for administrative and fiscal reform in favor of a smaller government. 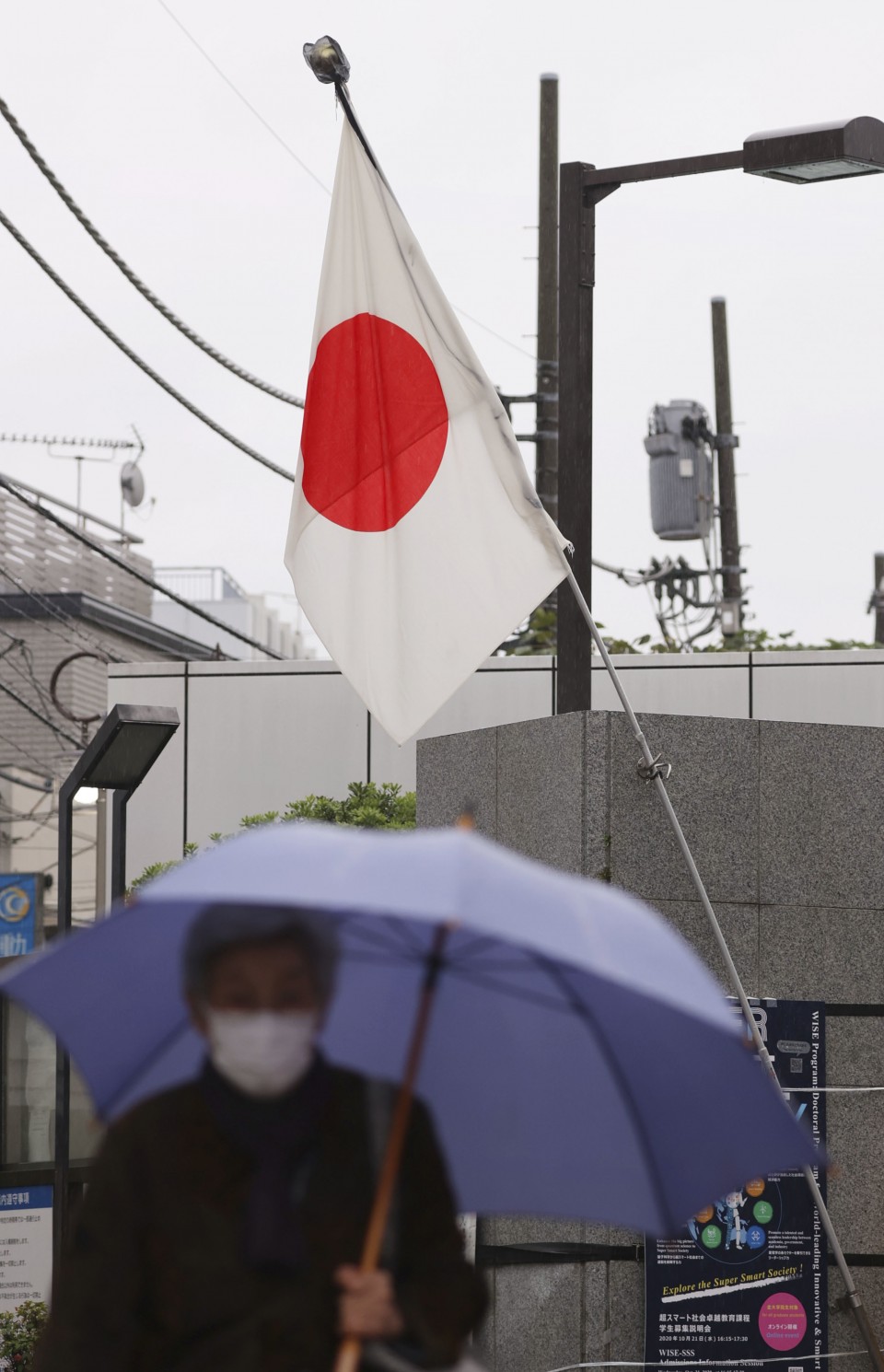 A Japanese flag is flown at a campus of the Tokyo Institute of Technology in Tokyo on Oct. 17, 2020, as a memorial service funded by the state and the ruling Liberal Democratic Party is held for former Prime Minister Yasuhiro Nakasone. (Kyodo)

Universities across the country flying their flags drew mixed reactions from students and teachers.

A 19-year-old male student at Osaka University criticized the move to send a written request to universities, saying "universities should be left to think for themselves" on whether they want to join in mourning.

At Kyushu University in southwestern Japan, where a flag was flown at half-mast, a 20-year-old student said he feels "a bit uncomfortable" with the government's request.

In the southernmost island prefecture of Okinawa, the University of the Ryukyus has told Kyodo News that it has no plans to heed such a request.

Hiroto Tokuda, a professor of administrative law, said the act itself of "sending a notice asking (us) to express sympathy is virtually coercion," and criticized the government for interfering "academic freedom."

Ahead of Saturday's event, Japan's education ministry has requested national universities and other official institutions to join in mourning, prompting some academics to raise concerns over whether it was proper to do so.

Meanwhile, a teacher at Gunma University in Nakasone's home prefecture of Gunma, where a flag was at half-mast, said he does not see any problem with it as the request was "not compulsory."

At Tokyo Institute of Technology in the Japanese capital, a flag was flown. A female student, 18, said, "I don't think there is any problem since a national university receives a budget (from the government)."

The government has allocated about 96 million yen ($910,000) from the reserve fund in the fiscal 2020 national budget for the cost of the memorial service. The state and LDP have evenly split the cost, which totals nearly 200 million yen.

The memorial service, which was slated for March but postponed due to the coronavirus pandemic, was attended by about 640 people including lawmakers and Prince Fumihito and other imperial family member, among the roughly 1,400 invitees.

School officials have said the request was made by education minister Koichi Hagiuda on behalf of the central government in a letter dated Tuesday.

The letter was sent to the heads of national universities and independent agencies under their jurisdiction, as well as educational associations. The request was that they do what they thought best in accordance with the contents of the letter.