Malaysian opposition leader Anwar Ibrahim is pictured in Kuala Lumpur on Oct. 13, 2020, after meeting with King Abdullah Ri'ayatuddin. Anwar said he has presented to the king evidence of the "formidable and convincing" majority support he received in parliament to form a new government, although the palace denied receiving a name list. (Kyodo)

Malaysian opposition leader Anwar Ibrahim said Tuesday he has presented to King Abdullah Ri'ayatuddin evidence of the "formidable and convincing" majority support he received in parliament to form a new government, although the palace denied receiving a name list.

Comptroller of the Royal Household of the National Palace Ahmad Fadil Shamsuddin confirmed in a statement that the two met for about 25 minutes and Anwar submitted the number of lawmakers in the House of Representatives that he claimed backed him.

"However, he did not furnish a name list of the members of the House to strengthen his claim," Ahmad Fadil said, adding that the king advised Anwar to "abide by and respect the legal process as enshrined in the Federal Constitution."

This appears to contradict Anwar's assertions during his press conference after the meeting, that he presented sworn statements and other documents from party leaders to the king.

"These documents (show that) it is abundantly clear that we have registered formidable and convincing majority in parliament," he told reporters. 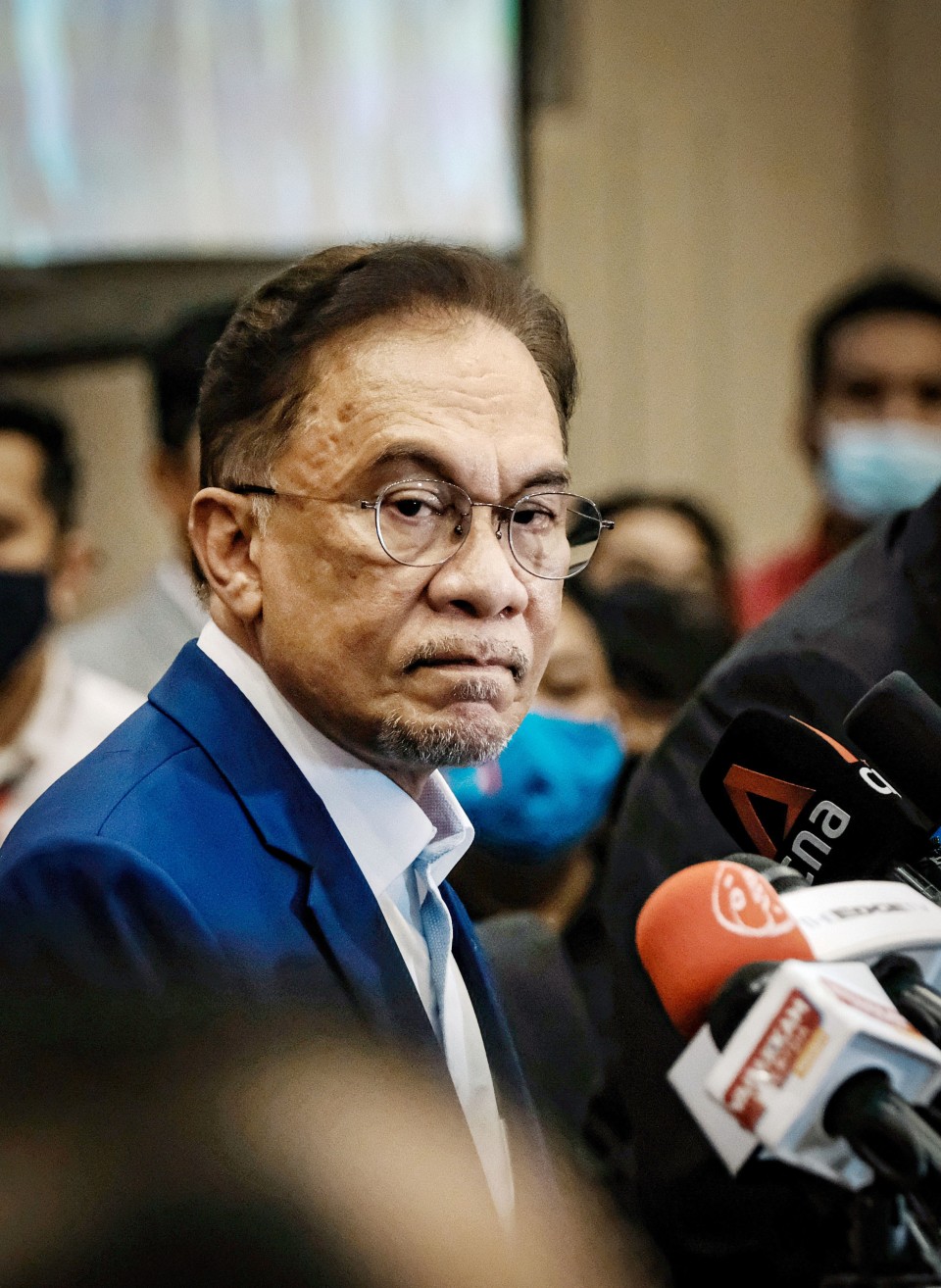 Anwar Ibrahim meets the press in Kuala Lumpur on Oct. 13, 2020. Anwar said he has presented to King Abdullah Ri'ayatuddin evidence of the "formidable and convincing" majority support he received in parliament to form a new government, although the palace denied receiving a name list. (Kyodo)

"Prime Minister Muhyiddin (Yassin) has lost his majority and therefore it would be appropriate for him to resign," he added.

Anwar also said the king will, over the next two days, meet political party leaders to gauge their views before coming to a decision.

In response, Muhyiddin, in an online interview with local media that was aired live on his Facebook page, said he trusts the king's wisdom in resolving the issue.

"I will leave it to the king's best judgement as whatever decision he makes will be in accordance with the Federal Constitution," he said.

Anwar caused a stir when on Sept. 23 he claimed Muhyiddin's government had "collapsed" after many lawmakers from the ruling party allegedly swore their allegiance to him.

Ahmad Zahid Hamidi, the president of the dominant party in the ruling coalition, the United Malays National Organization, boosted that claim when he acknowledged that "many UMNO MPs" had expressed support for Anwar and that he respected their stand.

UMNO and Muhyiddin's party, Bersatu, have an uneasy relationship as UMNO, which won more seats in the House in the 2018 election, felt being undermined by a minor party like Bersatu that not only grabbed the premiership but also other major positions in the government.

Anwar told reporters he has more than 120 lawmakers backing him, but he declined to name them. A list of 122 names went viral on social media after he dropped the bombshell more than two weeks ago.

At least half a dozen of those lawmakers in the list have lodged police reports denying their involvement in Anwar's power bid.

This prompted the police to investigate Anwar, with Criminal Investigation Department chief Huzir Mohamed confirming on Monday that Anwar would be called in for questioning soon.

"Today it's clear Tan Sri Muhyiddin Yassin still maintains the support to continue leading the National Alliance government," he said in a statement.

"Anwar has lied to the people...What's in his mind is only his personal ambition without a thought to the impact of political instability to the country's economy and people's welfare," he added.

Muhyiddin came to power seven months ago after a similar shift in allegiance among lawmakers led to the collapse of the government of Prime Minister Mahathir Mohamad barely two years in the making.

King Abdullah had played a key role in February to break the political impasse.

In an unprecedented move, he spent two days interviewing each of the 222 lawmakers in House to gauge their choice for the premiership as there was a tussle between Mahathir, Anwar and Muhyiddin, with each claiming having majority support.

The king eventually pronounced Muhyiddin as the winner, but his ruling coalition currently commands a razor-thin majority by virtue of holding 113 seats in the 222-seat chamber, which is the lower house of parliament.

U.S. Capitol on alert amid attack concerns, but no incidents reported