The Beijing motor show, the biggest of its kind since the coronavirus pandemic, kicked off on Saturday, with China claiming it has brought the outbreak under control and the country's economy has begun to bounce back.

The motor show was originally scheduled to be held in April, but it was delayed against a backdrop of the spread of the virus, first detected in the central Chinese city of Wuhan.

In a bid to capitalize on the world's largest automobile market and population of over 1.4 billion people, many carmakers, including those from Japan and Europe, are eager to boost sales of eco-friendly cars as well as automated and electric vehicles in China.

Some automakers, however, decided to call off exhibiting their new cars following the five-month postponement.

At the 16th Beijing motor show, Toyota Motor Corp. unveiled its e-Palette, a self-driving vehicle that is slated to be used for the Tokyo Summer Olympics and Paralympics, which has been put off by one year to 2021. 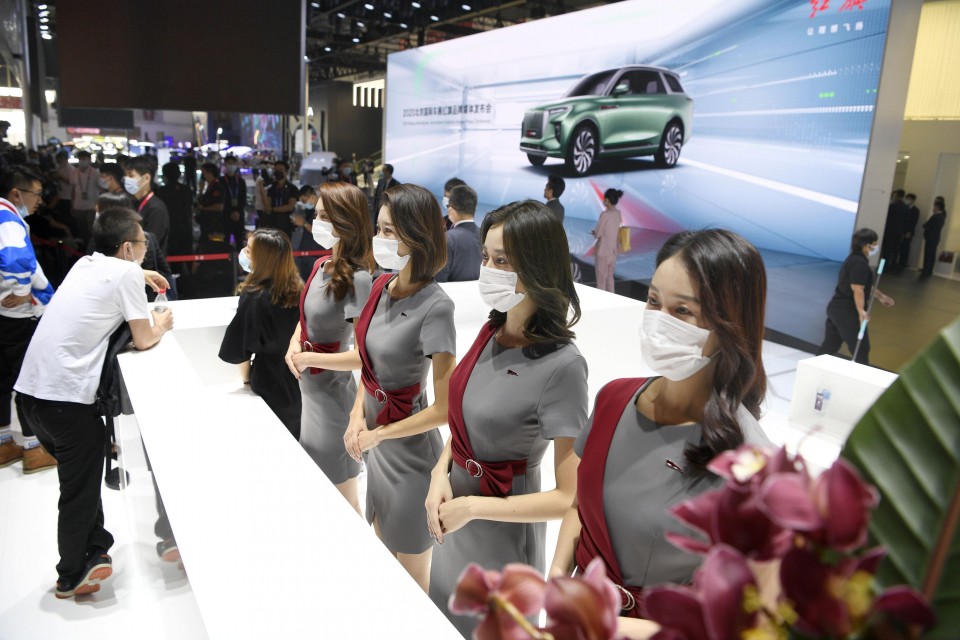 Photo shows staff wearing masks at a booth on the opening day of the Beijing motor show. (Kyodo)

Nissan Motor Co. also revealed its all-electric Ariya sport utility vehicle, making its public debut overseas. The SUV is set to go on sale in China by the end of next year.

In China, sales of new vehicles have been picking up in recent months as the world's second-biggest economy has been recovering due in part to a rebound in industrial production and consumer spending.

China's broader economy, meanwhile, logged its first expansion in two quarters during the April-June period despite sluggishness in exports, a major driver of growth, climbing 3.2 percent from the previous year.

The virus that causes respiratory disease COVID-19 has sickened more than 85,000 people in mainland China and killed over 4,600. The increase in infections is believed to have peaked in late February in the country.