More than 70 percent of schoolchildren in Japan feel stress as a result of the spread of the novel coronavirus, according to a survey by a state-run medical institute.

In response to a survey allowing multiple answers, 72 percent of elementary, junior high and senior high school students said thinking about the virus made them feel bad or affected their concentration, according to the National Center for Child Health and Development.

The survey also found that 32 percent would not wish it to be known if they or their family members become infected with the virus, while 47 percent believe most people would wish to keep it a secret. 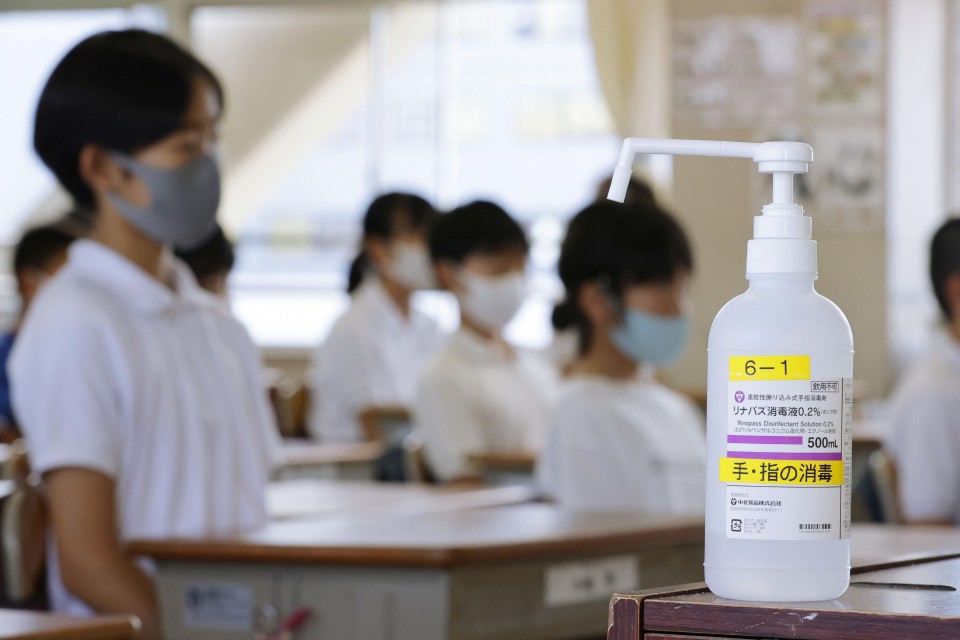 Photo taken Aug. 17, 2020, shows a bottle of disinfectant in a classroom of an elementary school in Ogaki in Gifu Prefecture, central Japan. A new school term started the same day following summer holidays that were shorter than usual to allow students to catch up with schoolwork they missed during closures caused by the new coronavirus outbreak. (Kyodo)

Twenty-two percent said they would not want to play or hang out with those who have contracted the virus, even once they recover.

The center, a major hospital in Japan specializing in pediatrics, perinatal care, obstetrics and maternal medicine, conducted the online survey from June 15 to July 26 to examine the impact the pandemic has had on children.

Commenting on the results, Mayumi Hangai, a pediatrician and researcher at the center, said parents should let children express their feelings freely rather than scolding them for being irritated, using violence or taking other actions.

"Because it is natural that children get irritated (amid the virus spread), parents should understand that such feelings come from stress," Hangai said. "Parents' understanding would be the best way to reduce children's stress."