A left foot placed toward a sandbag followed by a double-punch from left and right fists, 8-year-old Manus Boonjamnong stood before the mid-sized leather sandbag practicing, not knowing that one day he would be an Olympic legend.

After Manus was introduced to boxing as a sparring partner for his friend, he was hooked. Little Manus would slip away from his parents for practice every day with his neighborhood coach, and his younger brother, Manon, later joined the activity.

Manus was Ratchaburi province's representative for the National Youth Games when he was 14 years old. Despite having little interest in the games due to a lack of local support, his father pushed him forward and encouraged him to run every day. 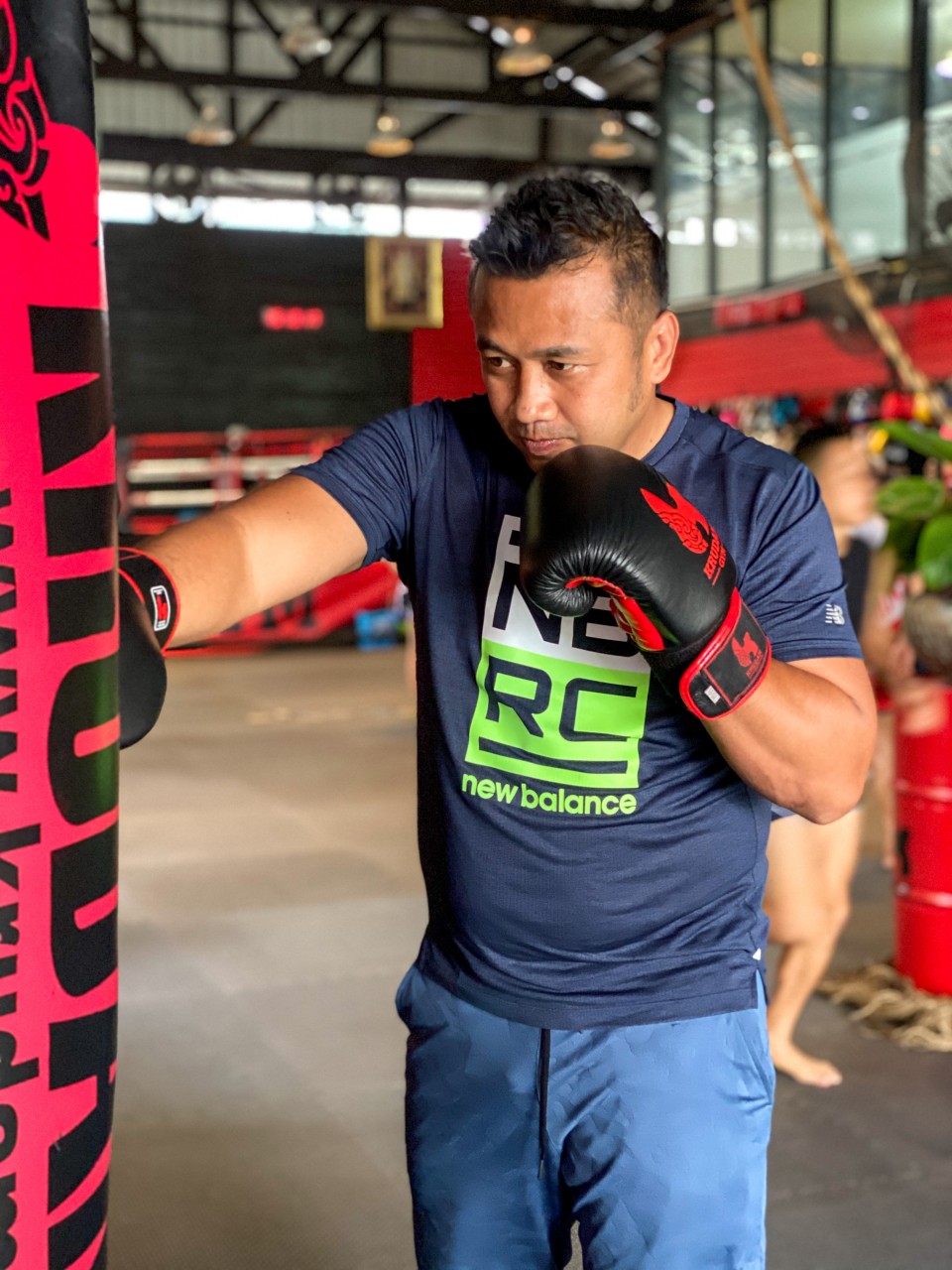 Manus Boonjamnong shows his boxing moves at a friend's boxing gym in Bangkok on Aug. 21, 2020. (Kyodo)

After more than 10 hours on the train to Songkhla, a far southern province of Thailand, Manus became laser-focused on one goal: a gold medal. Achieving this, he was also the games' "best boxer" and invited to join the national team as his stellar performance caught the eye of then Cuban coach Juan Fontanils.

Since then, his rollercoaster life has been up and down.

"I did not think about becoming a hero initially. But once I saw Somrak Khamsing -- Thailand's first Olympic gold medalist -- coming back from the 1996 Olympic, I started thinking I have to be part of the Olympics someday," Manus said.

Adopting Somrak as his role model motivated him to be more ambitious. In 2004, Manus made his Olympic debut at the Athens Games.

"I was having fun and was confident from Day 1 that I will take a medal back home," Manus said about his first Olympics.

Manus enjoyed a strong start and reached the final round. He beat Cuba's Yudel Johnson 17-11 in the final to win the last of Thailand's three gold medals in Athens. Manus had a hero's welcome home and entered the pantheon of his role model.

The new star, however, did not keep rising after the peak of his career. Manus admits he spent almost all of his money on boozing and partying with friends. For him, the parties were his reward for a job well done in marathon training.

"I was not aware that I would get all the reputation and money at the age of 24. Many people came to me, but only a handful of them were left when I needed them," he said. "I regret it, but I could not do anything except to admit it."

A family quarrel sent him spiraling further down, and he faced heavy public criticism. It took him nearly a year to get back on track to fulfilling his aims for a boxing career.

Thailand's boxing association president sent him to train in modest conditions in Cuba, where he sharpened his boxing skills under his former coach for four months before returning invigorated.

His tireless efforts paid off despite all the scorn he had received. He rebounded with a gold medal at the 2006 Asian Games in Doha before heading off to another Olympics.

"It was torture coming back the second time, doubting if I was worthless like what people said about me," the champion said.

In 2008, Manus competed at the Beijing Olympics, aiming to bring Thailand another gold. He said coming back to the games the second time to defend the championship was tremendous pressure and challenging, including having to drop 15 kilograms in a month.

"I had to fight against myself a lot. The second time trying to win was about stopping people from looking down on me and becoming my country's historic icon," Manus said.

Although Manus lost the final to the Dominican Republic's Manuel Felix Diaz and settled for the silver medal, he said he was already satisfied after securing at least a bronze. That achievement alone made him the first Thai to win medals in consecutive Olympics.

His reputation soared, but it also came with expectations that he would join the Olympics for the third time in London. But he decided to call it quits to focus on mentoring boxers instead.

After ending his amateur boxing career, he embarked on a new path as a boxing trainer.

He has been teaching Muay Thai boxing at a gym in China since 2017 but returned to Thailand earlier this year due to the novel coronavirus pandemic. Manus continues to train boxers at his friends' gyms in Bangkok and Chiang Mai in northern Thailand.

"Boxing gives me everything, reputations, and chances to meet new people. I was born for boxing," Manus said. "I cannot explain what I love about boxing, but I only know that I am very happy just to be around it."

As for the Tokyo Games, which were postponed until next year due to the pandemic, Manus, believes Japan will be ready.

"Everything in the Olympics is beautiful. Each country has its style, and I believe that Japan will have some surprises for all international fans," he said.