Thai Prime Minister Prayut Chan-o-cha on Thursday warned that an anti-government rally planned for this weekend in Bangkok could spark a second wave of the COVID-19 pandemic in Thailand and urged it be called off.

Prayut, in a televised statement, said the mass gathering, which could be the largest protest yet against his government, poses "an enormous risk of new infections." 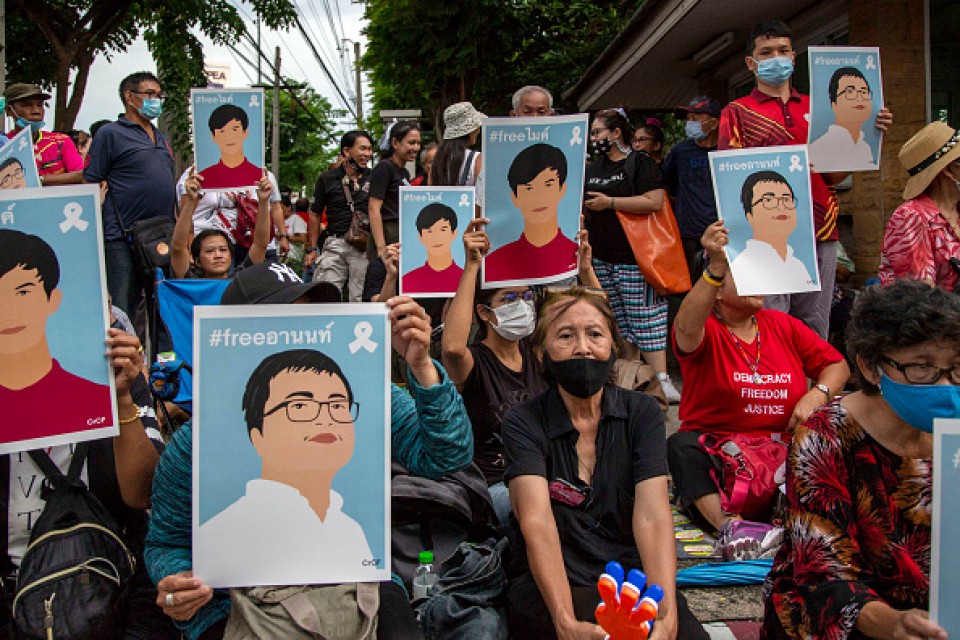 Anti-government protestors hold signs saying #freeAnonNampa and #freePanupongJadnok outside of the Bangkok Remand Prison where the two activists are being held on September 6, 2020 in Bangkok, Thailand. (Getty/Kyodo)

"And with that, you also create enormous risk to the livelihoods of tens of millions of fellow Thais," he said.

He asked all concerned parties to put aside political issues and instead focus on the country's economic recovery.

"Any major flare up of infections will lead to terrible consequences and even worse economic destruction, the likes of which we have never seen. Please think about this," he implored.

The unauthorized rally of mostly disenchanted youth is set to begin on Saturday afternoon at Thammasat University's Tha Prachan campus and continue overnight, before demonstrators march to Government House on Sunday.

On Aug. 10, student protesters submitted a 10-point manifesto on reform of the monarchy, which has long been shielded from criticism under the strict lese-majeste law.

Rallies drawing mostly young people have recently been held almost daily in Thailand, with participants also calling for the resignation of Prayut as well as constitutional changes.

Local media reported that the upcoming rally is expected to draw some 50,000 participants, with almost 10,000 anti-riot police to be deployed.

Prayut said, "I have asked our police forces to be tolerant. I trust in the good sense of the protestors."

In his address, Prayut also said, "Let me tell all protestors, now, loudly and clearly that I hear you have political grievances, and that you have issues with the Constitution. I respect your opinions."

"But right now, our country has some very much more immediately painful issues that it must address," he said. "Let's try and get through this global crisis, and then we can come back to politics again."

Thailand has been recording new infections of less than 10 a day. On Thursday, health authorities said there were none to report.