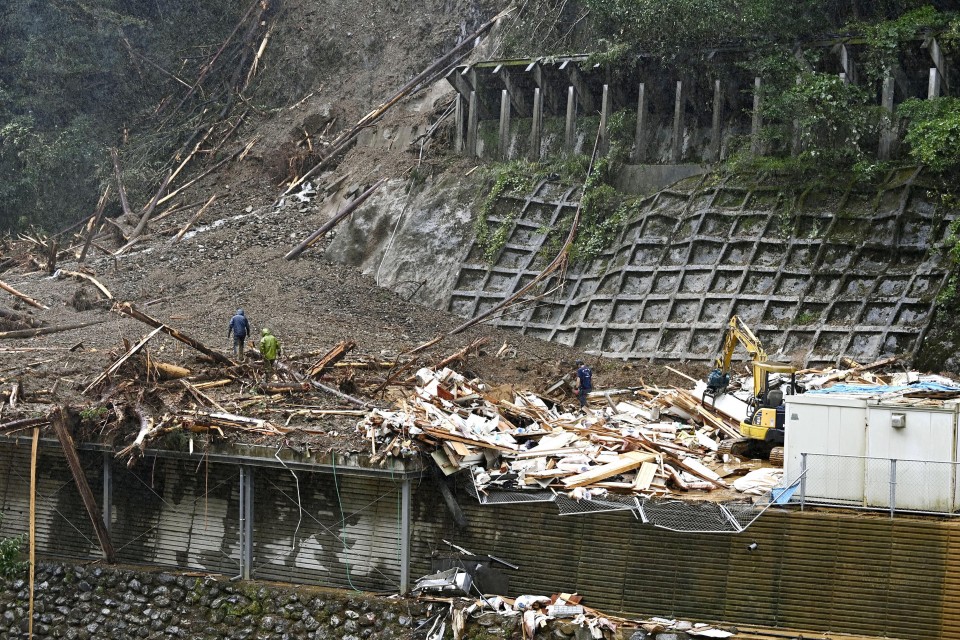 Those injured were not only in Kyushu but also in the Kinki and Chugoku regions in western Japan. About 23,000 people in 11 prefectures were taking shelter at one point on Monday afternoon, and some 475,000 houses suffered temporary blackouts in Kyushu.

Even as Typhoon Haishen headed for the Korean Peninsula, the Japan Meteorological Agency warned of torrential rain, strong winds and tidal surges in some areas, urging people across a wide area to remain vigilant.

In the village of Shiiba, Miyazaki Prefecture, where rainfall of over 400 millimeters was recorded on Sunday, police officers were searching for a woman in her 60s, her son in his 30s and two Vietnamese male interns who were reported missing after a mudslide struck a construction firm office, which was also used as a residence.

The woman's husband in his 70s, who runs the company, suffered broken ribs, according to police. 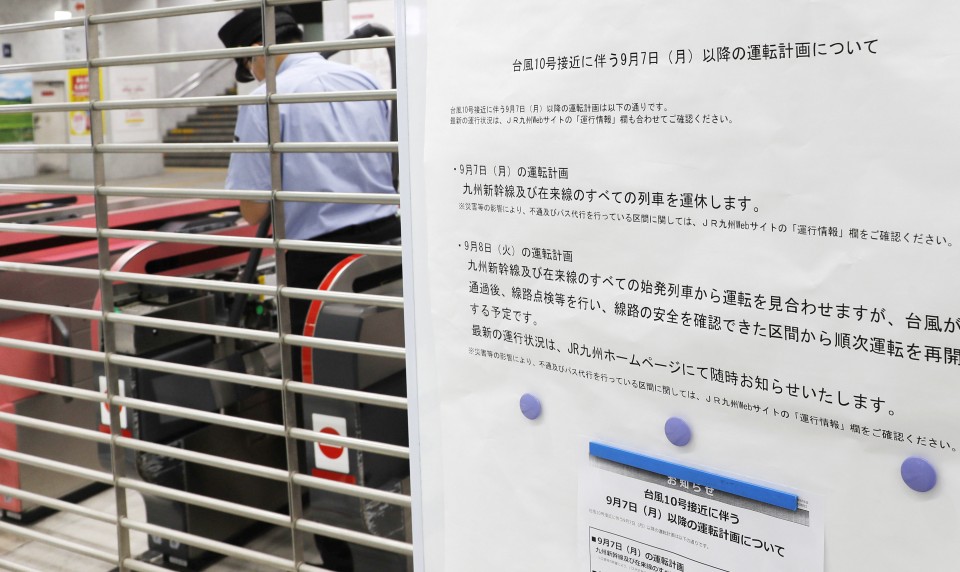 Elsewhere in the region, a man in his 40s fractured his skull after falling from the roof of a garage in Yufu, Oita Prefecture, while four people suffered slight injuries at an evacuation center in Goto, Nagasaki Prefecture, after a window shattered, according to authorities.

Major mobile carriers NTT Docomo Inc., KDDI Corp. and SoftBank Corp. said their networks were disrupted in areas of Kyushu, as well as the western regions of Shikoku and Chugoku.

Kyushu Railway Co., which canceled its shinkansen and other train services, is planning to restart them Tuesday in areas where it has been confirmed that they can operate safely. 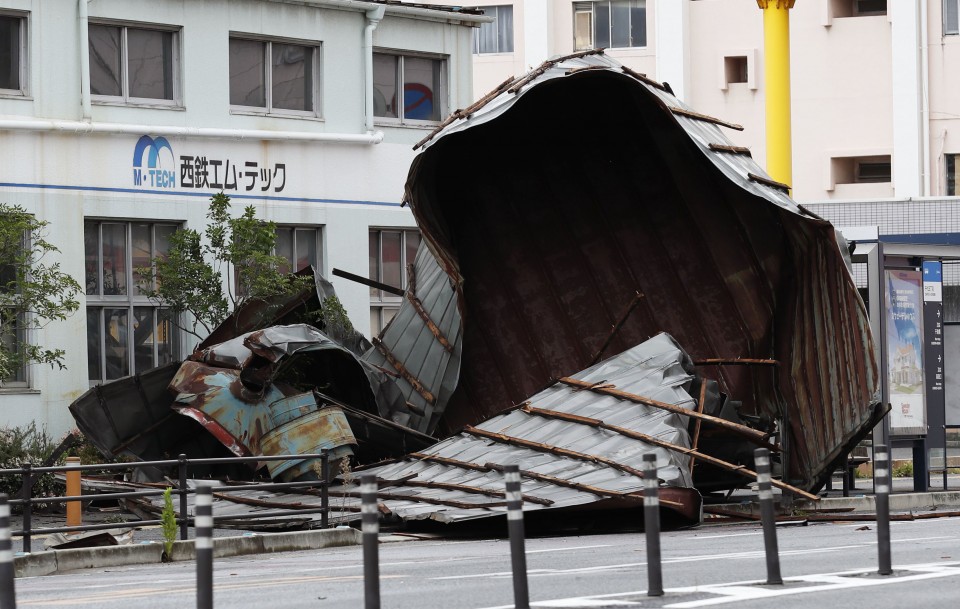 A crumpled building roof is seen on a street in Fukuoka, southwestern Japan, on Sept. 7, 2020, after it was torn off a car mechanic's garage by strong winds brought by powerful Typhoon Haishen. (Kyodo)

Many department stores, supermarkets and shops in Kyushu were closed temporarily.

Many people spent the night at evacuation shelters and hotels across Kyushu and the southern Japan islands of Okinawa Prefecture as they waited for the typhoon to pass.

"I had to hurry because I was told that (this evacuation center) would only accept 10 more people," said Kazuko Hamada, 67, who had stayed in the shelter set up at a building near JR Kumamoto Station. She initially went to another evacuation facility but was turned away because it was full.

"I hope my house is all right," she added as she prepared to head home.

A 46-year-old businessman who stayed at a hotel in the city of Fukuoka said, "Nobody will be in the office so I stayed at a hotel to respond to emergencies. It seems like there wasn't severe damage, so I'm relieved."

The weather agency said that the strongest gusts on record were observed at more than 30 locations as the typhoon passed. In the Nomozaki district of the city of Nagasaki gusts reaching a record 213.84 kilometers per hour were registered in the early hours of Monday.

On Fukue Island in the prefecture, rainfall of up to 88 mm per hour was recorded.

In the 24 hours to 6 p.m. Tuesday, rainfall of up to 150 mm was forecast for the Tokai region of central Japan, and 100 mm for the Kanto-Koshin region including Tokyo.

IN PHOTOS: Scars of Typhoon Haishen