The world's smallest Rubik's Cube was unveiled to the media on Wednesday to commemorate the 40th anniversary of the six-sided puzzle in Japan.

The aluminum cube, weighing about 2 grams and measuring 9.9 millimeters on each side, was shown a day before an exhibition opens to mark the debut of the popular three-dimensional puzzle in the country in 1980. 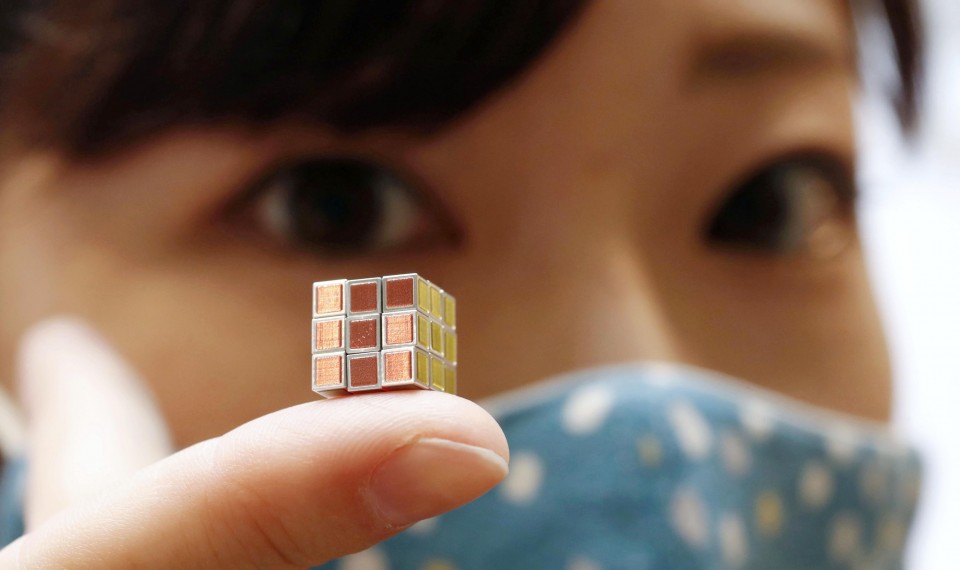 Photo taken Sept. 23, 2020, shows the world's tiniest 9.9-millimeter-long Rubik's Cube unveiled to the media in Tokyo. MegaHouse Corp., a subsidiary of Japanese major toy maker Bandai Co., started accepting orders on its website the same day for the 3-D combination puzzle to be sold at 198,000 yen ($1,880). Secondary use of this photo requires attaching the following copyright: "(C) 1974 Rubik's (R) Used under licence Rubiks Brand Ltd. All rights are reserved." (Kyodo)

The exhibition includes a mosaic artwork made up of 1,600 pieces of Rubik's Cube, portraying Hungarian sculptor and architect Erno Rubik, the puzzle's inventor.

The commemorative cube was developed by MegaHouse Corp., a subsidiary of Bandai Namco Holdings Inc., and Iriso Seimitsu Co., a Japanese metal processing company based in Saitama Prefecture. It retails at 198,000 yen ($1,880) per cube.

"We would like to expand the possibilities for Rubik's Cube through pursuing new approaches and projects," MegaHouse President Hiroshi Sakakibara said.

The cube was first marketed in Japan in 1980, and in the first year alone 4 million were sold, according to MegaHouse.

The exhibition hosted by the Hungarian Embassy among others will open free of charge in Tokyo's Minato Ward through Nov. 9.