The global economy is projected to shrink 4.5 percent in 2020 from a year before, the Organization for Economic Cooperation and Development said Wednesday, upgrading the previous forecast due to the gradual recovery from a slump caused by the coronavirus pandemic.

The estimated contraction of the world's gross domestic product was upwardly revised 1.5 points from the 6.0 percent shrinkage projected in June, assuming that "sporadic local outbreaks" will continue but be addressed by "targeted local interventions rather than national lockdowns," the OECD said in its latest interim economic outlook. 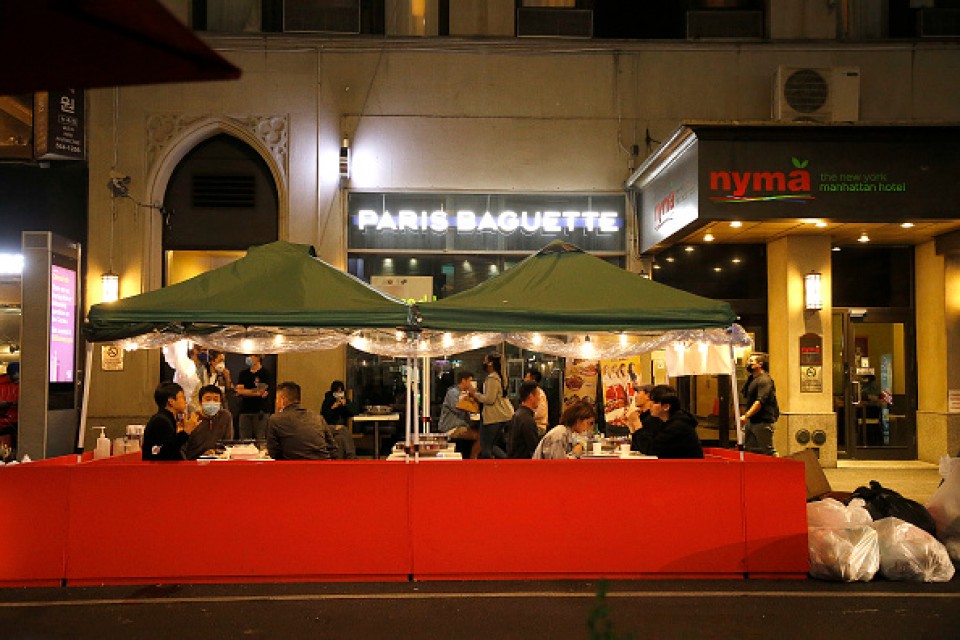 Diners are seated at an outdoor restaurant during Phase 4 of re-opening following restrictions imposed to slow the spread of coronavirus on September 15, 2020 in New York City . The fourth phase allows outdoor arts and entertainment, sporting events without fans and media production. (Getty/Kyodo)

"Output picked up swiftly following the easing of confinement measures and the initial reopening of businesses" after global production "collapsed in the first half of 2020 as the COVID-19 pandemic took hold," the Paris-based club of 37 mostly wealthy nations said in the quarterly report.

But "the pace of the global recovery has lost some momentum over the summer months," said the report, which is based on the assumption that a vaccine against the virus will not become widely available until late 2021.

The OECD expects the world economy to bounce back in 2021, projecting a 5.0 percent expansion, but warned "a stronger resurgence of the virus, or more stringent containment measures, could cut 2 to 3 percentage points from global growth in 2021."

The latest upgrading of the projection for the global economy in 2020 resulted from a "sharper-than-expected" rebound in China, whose estimated GDP figure this year was modified from a 2.6 percent contraction to 1.8 percent growth, and some other upward revisions in developed nations.

The Chinese economy is expected to see an 8.0 percent jump in 2021, revised upward from 6.8 percent growth.

"Enhanced global cooperation to maintain open borders and the free flow of trade, investment and medical equipment is essential to mitigate and suppress the virus in all parts of the world and speed up the economic recovery," the report said.

As for the United States, the economy is projected to shrink 3.8 percent in 2020, revised upward from the June forecast of a 7.3 percent contraction, and to grow 4.0 percent in the following year.

The OECD forecasts the Japanese economy to contract 5.8 percent this year, upgraded from the previous estimate of a 6.0 percent drop. It is expected to advance 1.5 percent in 2021.

The organization pointed out that corporate investment and international trade remain weak due to the repercussions of the pandemic, "holding back the pickup in manufacturing production" in export-oriented countries such as Germany, Japan and South Korea.

The eurozone economy is seen shrinking 7.9 percent in 2020, up from the previous projection of 9.1 percent fall, and grow 5.1 percent next year.

The OECD showed in June a worst-case scenario in which a second wave of infections occurs later this year and the world would see a 7.6 percent contraction in 2020. The organization projected a 6.0 percent drop under the optimistic scenario based on the assumption that the pandemic remains under control.