Suga, elected by parliament on Wednesday as Japan's first new leader in nearly eight years, told reporters after the conversation that he told Trump the alliance is the "cornerstone of peace and stability in the region."

Trump was quoted by Suga as saying the alliance should be strengthened even further and that Suga is welcome to call him "24 hours a day." 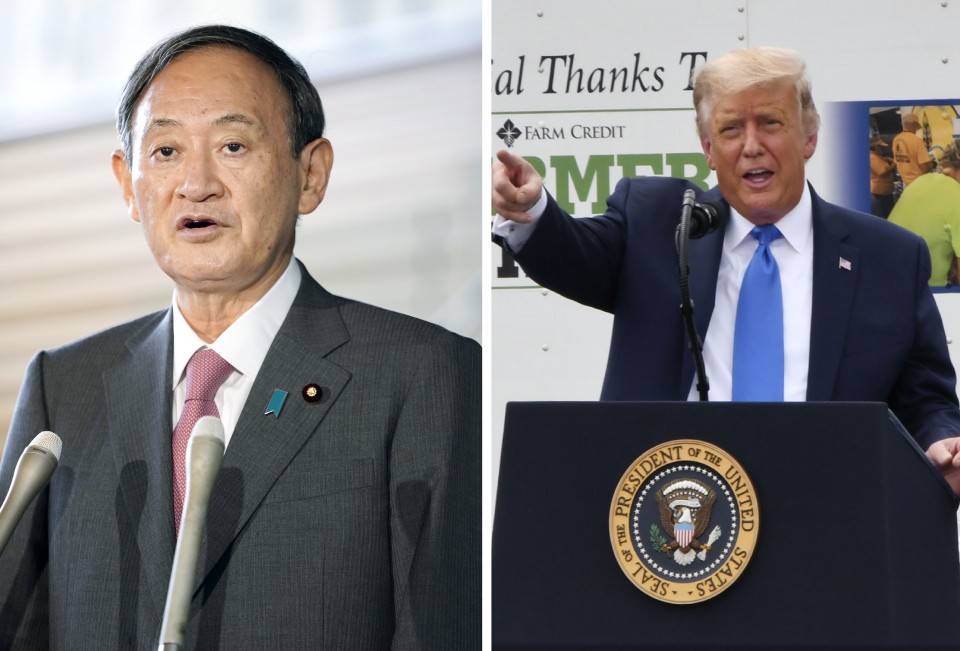 The two also discussed the situation surrounding North Korea and the response to the COVID-19 pandemic during the 25-minute conversation.

Suga asked Trump for continued U.S. support in pushing for the return of Japanese nationals who were abducted by North Korean agents in the 1970s and 1980s, according to a Japanese government official.

The leaders agreed the two allies will cooperate on the development and distribution of a vaccine and treatment for COVID-19, the official said.

They also discussed the importance of pursuing their shared vision of a free and open Indo-Pacific and agreed to work together to strengthen the global economy, according to the White House.

Earlier in the day, Suga had a phone conversation with Australian counterpart Scott Morrison, the first head of government he spoke to since his inauguration.

Suga's predecessor, Shinzo Abe, is known to have formed one of the closest relationships with Trump among world leaders.

The two played golf together on multiple occasions and the U.S. president invited Abe, Japan's longest-serving prime minister, to his Mar-a-Lago estate in Florida twice, in 2017 and 2018.

Suga, Abe's right-hand man as chief Cabinet secretary during that time, is seen as a savvy politician on the domestic front but considered inexperienced in diplomatic affairs.

"Congratulations Prime Minister Yoshihide Suga. You have a great life story! I know you will do a tremendous job for Japan and for the world. Look forward to talking soon!" Trump had tweeted on Thursday.

After talking with Morrison and Trump, Suga told reporters outside his official residence that he was eager to hold phone calls with other world leaders, without naming any names.

Among the diplomatic challenges Suga is facing is Trump's claim that Japan is not contributing enough to the alliance, under which U.S. troops are obligated to protect the country from armed attack.

Following the November presidential election, Japan is expected to face mounting pressure to share more of the cost of maintaining U.S. military bases in the country.