Some academics in Southeast Asia and the Pacific are hoping that Japan's new prime minister, Yoshihide Suga, will play a leadership role in Indo-Pacific affairs -- just as his predecessor Shinzo Abe did -- especially at a time when the United States and China are engaged in a "new cold war."

They suggest that Suga's government maintain the economic and maritime cooperation central to regional affairs, rather than primarily focusing on security, so as not to exacerbate U.S.-China tensions heightened over situations in the South China Sea, Hong Kong and most recently in Taiwan. 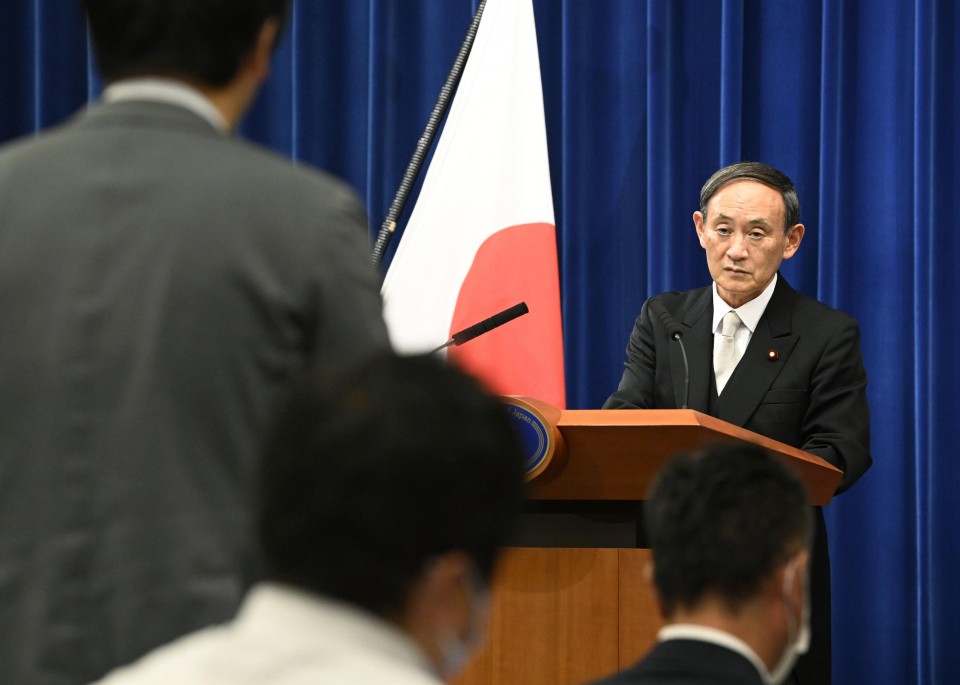 Japan's new Prime Minister Yoshihide Suga listens to a question from a reporter during a press conference at his office in Tokyo on Sept. 16, 2020. (Kyodo)

"The region has benefited from a Japan under Mr. Abe that was more proactive and consistent and a trusted partner. Mr. Suga represents continuity and this is reassuring," said Simon Tay, chairman of the Singapore Institute of International Affairs.

Tay was referring to Suga's affirmation during his first phone talks Sunday with U.S. President Donald Trump to advance the two countries' shared vision of a free and open Indo-Pacific in partnership with Australia, India, the Association of Southeast Asian Nations and other countries in the region.

"With the COVID-19 pandemic and Sino-American rivalry emerging, many will appreciate Japan's contributions as part of a wider collective leadership for the region," he said, in reference to the respiratory disease caused by the novel coronavirus.

The scholars expect Japan to take the lead in influencing China's conduct in line with international law and norms, but recommend that despite the rapid development of missile technology by China and North Korea, Suga not seek to acquire a strike capability against missile sites in other countries or back a NATO-like military alliance in the Indo-Pacific. 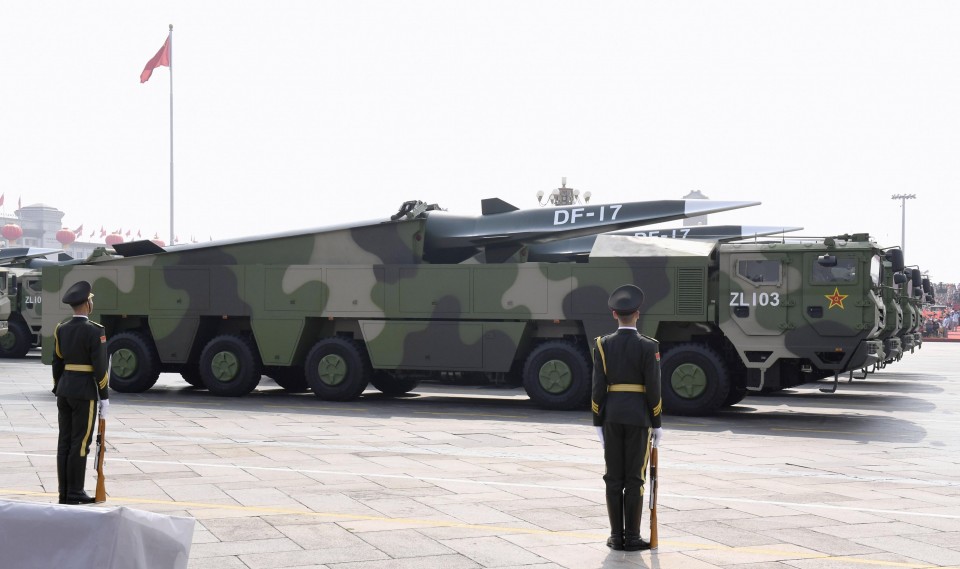 The Dongfeng 17, a next-generation ballistic missile, is on display during a military parade in Beijing on Oct. 1, 2019, marking the 70th anniversary of the founding of the communist People's Republic of China. (Kyodo)

Citing concerns that such measures -- even for the purpose of boosting deterrence -- may drag Japan into a regional arms race, Kavi Chongkittavorn, senior fellow for security and international studies at Chulalongkorn University in Bangkok, said, "ASEAN would like to see Japan as a normal country that is not militarily aggressive."

Calls by some members of Suga's Liberal Democratic Party for Japan to acquire the strike capability as part of its missile defense system "would not augur well in the region which went through the country's militarism during and before World War II," he said.

Tay and Kavi voiced skepticism over a recent call by U.S. Deputy Secretary of State Stephen Biegun to consider creating a formal alliance akin to the North Atlantic Treaty Organization involving the United States, Japan, Australia and India -- four major Indo-Pacific democracies collectively known as the Quad -- and other partners in a veiled counter to an increasingly assertive China.

"The Trump administration has been bellicose and I hope others in Asia will be firm but not provocative. Firmness will use diplomatic and multilateral methods rather than military," Tay said. "Japan may accept an Indo-Pacific version of NATO, but few others in Asia will." 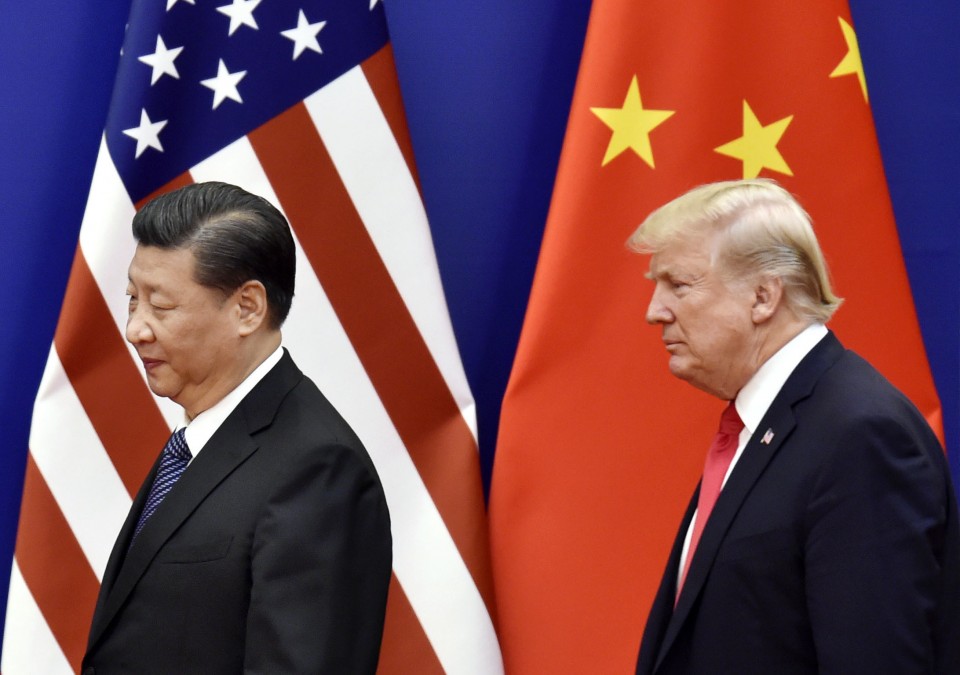 Kavi said the NATO-like arrangement could strengthen the Japan-U.S. alliance, but argued, "Building an anti-China military block in the region is a pipe-dream as it ignores the regional desire to keep in check the U.S.-China strategic competition."

"Such an initiative would further heighten the tension and jeopardize efforts for the much needed economic recovery in the post COVID-19 world," he said.

Underscoring such views, Shiro Armstrong, director of the Australia-Japan Research Center at the Australian National University, suggested Japan continue to put economic cooperation at the center of its regional diplomacy.

Tokyo, for example, could step up the supply of anti-coronavirus face masks and medical equipment, bolster regional supply chains disrupted by the pandemic and promote infrastructure development in developing economies -- measures that could be carried out in coordination with Washington, Beijing and other donors.

"Getting the balance right will be key as strengthening security ties without deeper economic cooperation will exacerbate the negative trend in the region towards enmity instead of creating space for China and the United States to cooperate," Armstrong said.

Armstrong also said that if former U.S. Vice President Joe Biden beats Trump in the Nov. 3 presidential election, Japan, Australia, the 10-member ASEAN and other countries should encourage a Biden administration to cooperate with China in addressing the warming of the Earth.

"Prime Minister Suga will need to work with other countries in Asia to engage the United States in the Indo-Pacific on a constructive agenda. Climate change will be a major agenda item for a Biden presidency," he said.

Once describing global warming as a "hoax" invented by China, Trump, the Republican leader, has effectively pulled the United States out of the Paris Agreement, a 2015 U.N. accord to fight climate change.

Similarly, Kavi said that if the Democrats recapture the White House, "Japan will have a bigger space to initiate its own policies which would be more fitting to the region."

"Mr. Biden will make the U.S. a normal country that can be expected to act certain ways as a superpower, not the kind of unpredictable leadership style of Mr. Trump," he said.