An English translation of Kim Soom's 2016 novel "Han myong" (one person), the first South Korean novel centered on so-called comfort women forced to work in Japanese wartime brothels, has been released this month as the issue continues to cast a shadow on bilateral relations.

Kim's novel, translated under the English title "One Left" by veteran husband-and-wife translators Bruce and Ju-Chan Fulton, draws on testimony from numerous former "comfort women" to depict the trauma of abduction and seven years of captivity in a Japanese military brothel as recalled by the protagonist, a Korean survivor in her 90s. 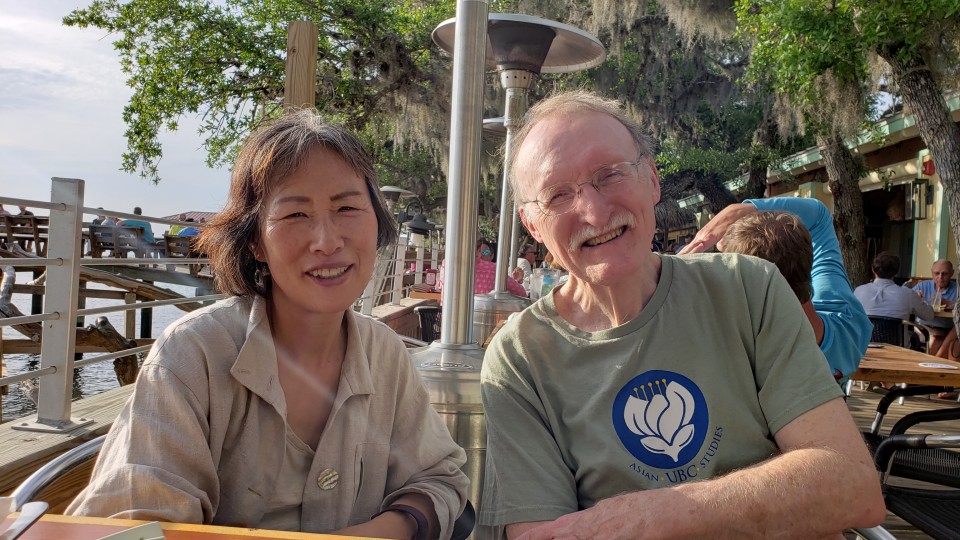 Husband-and-wife literary translators Bruce and Ju-Chan Fulton, whose latest project "One Left" is an English translation of South Korea's first novel centered on wartime "comfort women," pictured at a restaurant in Gainesville, Florida, on April 13, 2019. (Photo courtesy of Ron Rodgers)(Kyodo)

"Bruce and I decided (Kim) is the bravest author so far for this issue and we must translate it," Ju-Chan said, noting that the novel's frame narrative in contemporary South Korea makes it an "approachable" work "for the present and the future" rather than one focused solely on the past.

Kim also sidesteps the politicized or nationalistic discourses sometimes associated with the issue, said Bruce, who occupies a chair in Korean literature and literary translation at the University of British Columbia.

"She respects the wishes of the comfort women she interviewed and worked with: they seek a 'sincere apology' (from the Japanese government) and wish to 'regain human dignity'" while also relating to and supporting other victims of sexual violence," he said. "The surviving comfort women don't live in the past."

Throughout the novel, the aging protagonist -- who has never spoken of her wartime experiences -- debates coming forward as the number of still-living former comfort women on a public registry dwindles down to the last one. 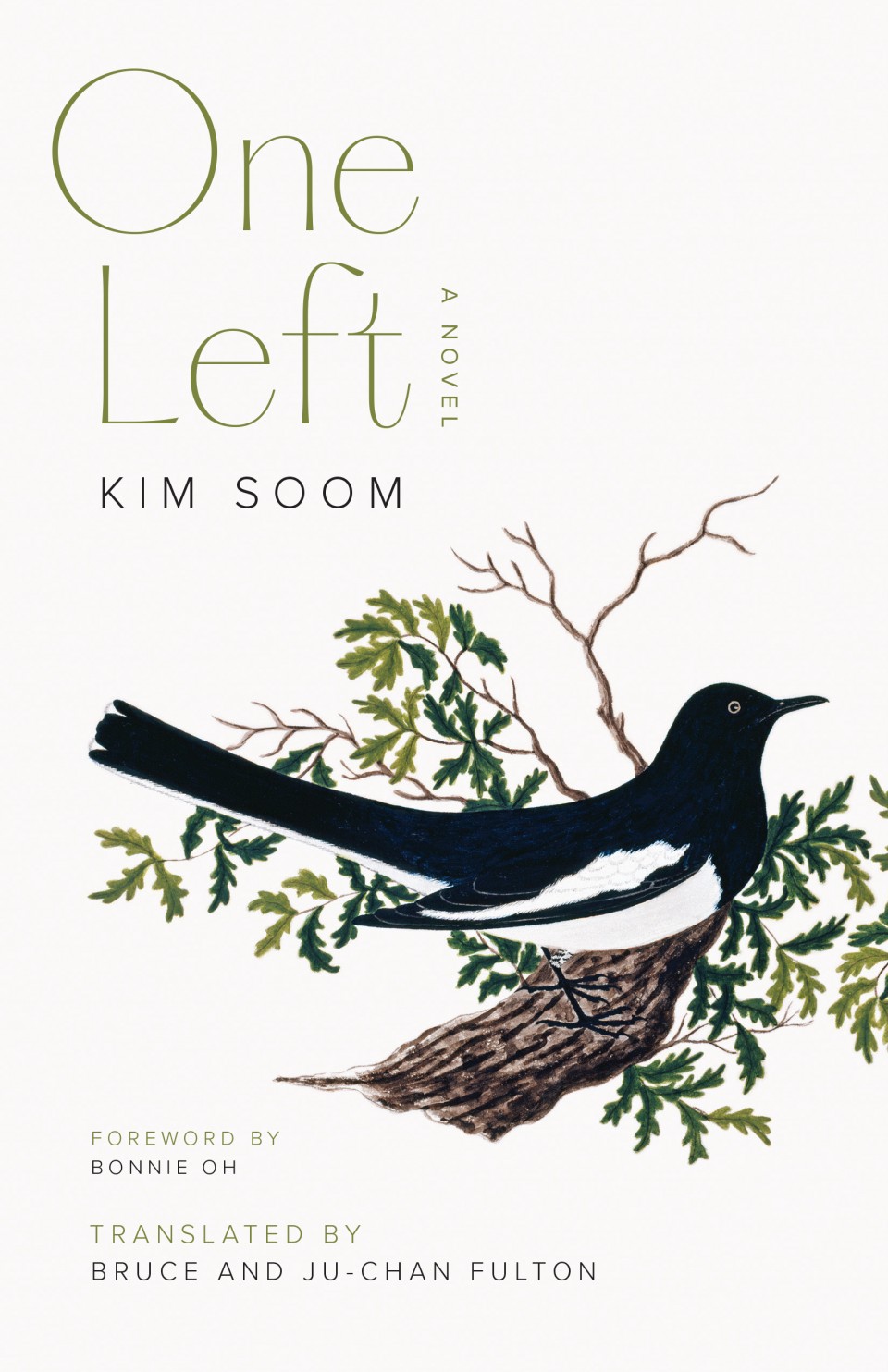 "One Left," an English translation of South Korea's first novel on the history of "comfort women" in Japan's military brothels during World War II, comes out in the United States on Sept. 15, 2020. (Image provided by the University of Washington Press)(Kyodo)

As the narrative unfolds in present-day South Korea, within the mostly abandoned neighborhood where the character lives, extended scenes return to the dehumanization she experienced and witnessed in wartime Manchuria, with over 300 endnotes connecting details and quotes to their sources in survivor testimony.

Decades later, as a movement to redress the historical injustice gained momentum, some 240 former comfort women came forward to register their status with the South Korean government. Fewer than 20 are still living, according to reporting this year, while Japan and South Korea remain locked in a protracted row over the issue.

The two countries reached an agreement in 2015 to "finally and irreversibly" resolve the comfort women dispute, but the South Korean government later concluded that the negotiation process was flawed amid domestic criticism that the victims' demands were not reflected in the deal.

While contentions have also surfaced in the West over comfort women monuments, including one in San Francisco that led to the dissolution of its 60-year sister-city relationship with Osaka in 2018, the body of English-language works on the historical issue has continued to grow.

Following earlier U.S. novels such as Nora Okja Keller's acclaimed "Comfort Woman" (1998), the topic has been addressed in an increasing variety of genres such as Dimo Kim's "Comfort Women: A New Musical" (2015), Emily Jungmin Yoon's poetry collection "A Cruelty Special to Our Species" (2018) and the interactive web documentary "The Space We Hold" (2017), produced by Canada's national film board.

The recent proliferation of English works on the subject may have blunted the interest of Western publishers, complicating efforts to bring out the groundbreaking South Korean novel in translation. Despite winning a prestigious PEN/Heim Translation Fund Grant for their manuscript in 2018, the Fultons faced over 30 rejections before finally cementing a contract for the translation this year.

Although some shorter South Korean works including a novella had previously touched on the history of comfort women, Kim became the country's first writer to center the issue in a full-length novel with "One Left," published over 70 years after World War II's end and some 25 years after the first public testimony from a survivor.

Kim, a prolific and celebrated author with a background in social work, went on to publish three additional novels based on her comfort women research, opening the country's literature to a historical episode long shrouded in silence.

Burying the issue may have shielded Korean complicity in organizing and managing Japan's wartime comfort stations, the translators said, but indicated that such a long delay is also a natural part of dealing with trauma that remained so raw for survivors.

"Trauma by its very nature is intrusive, it's hard to deal with, and until recently it hasn't been made public as trauma," Bruce said.

In view of the atrocities that took place around the 1950-53 Korean War and under ensuing military dictatorships, he explained that many of the country's most compelling recent works "either explicitly or implicitly bear evidence of trauma," and that "we can proactively encounter Korean literature" by facing such material. 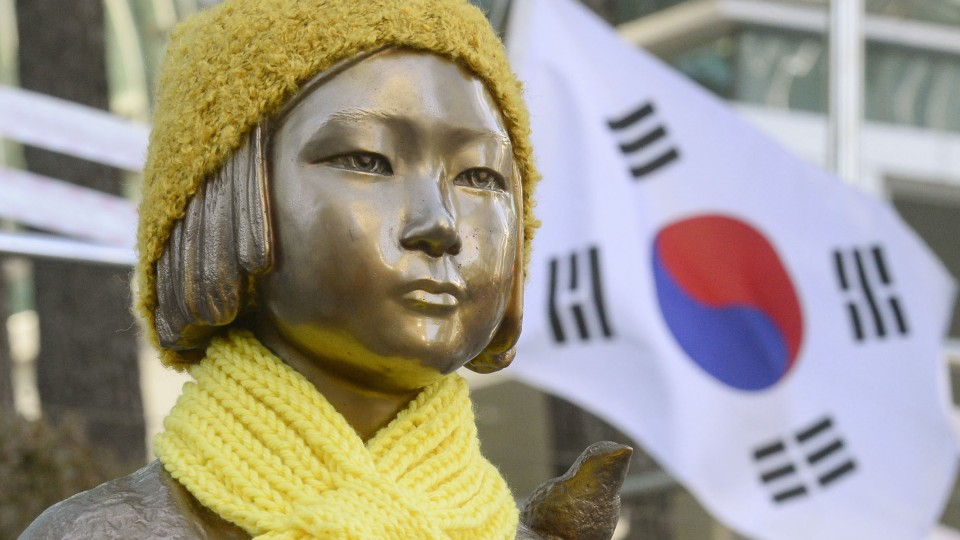 Photo taken in December 2015 shows a statue of a girl symbolizing the issue of "comfort women" in front of the Japanese Embassy in Seoul. (Kyodo)

Although "One Left" is unsparing in its depiction of wartime abuses, using what the translators call a "concatenation of horrific detail" to reconstruct captivity in a military brothel, Ju-Chan noted that the work as a whole is "a positive book about (the protagonist) finding her identity at that age."

The main character's long anonymity is contrasted with her vivid memory of over 20 girls, many lost in the war, whose names she keeps alive decades after they suffered together.

Meanwhile, her presence in contemporary South Korea, while a testament to memory and endurance in its own right, also allows a wider lens on the comfort women issue, including through mention of undocumented Chinese women held in the present-day South Korean neighborhood and implied to be trafficking victims.

The book's publication in English on Tuesday is likely to resonate with recent U.S. calls for social justice and bring further attention to the problem of human trafficking worldwide, the translators said in an email.

"We expect that the novel will transcend the Korea-Japan polarity that has existed for the past century and serve as a literary model for giving voice to the testimony of historically marginalized individuals and groups," they added.